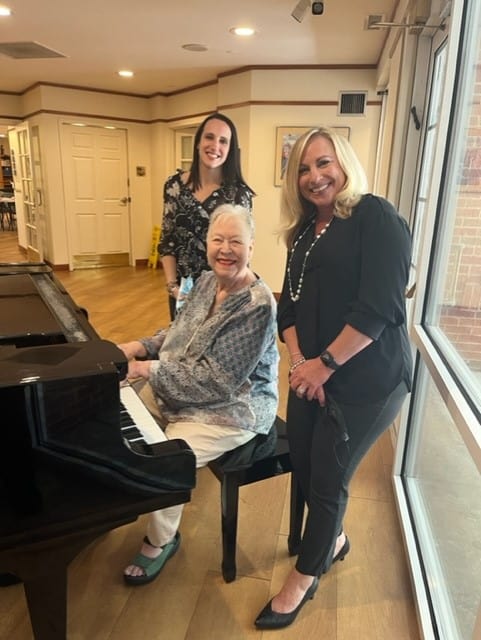 CHELSEA – Gaye Bennes comes from a family of gifted musicians and actors. Her mom was a musician and her father and brother were both actors. Born in 1936 in NYC, Gaye moved to LA when she was two years old. “That’s Hollywood,” she quipped.

Growing up, Gaye was often on the set at MGM Studios – singing and playing the piano while attending school with other child actors. Gaye maintains her parents were enthralled with the entertainment industry, but that didn’t necessarily translate into economic security. Still, the family persevered and Gaye thrived as a child prodigy. From an early age, music played a pivotal role in her life.

Gaye began playing the piano at the age of three, exhibiting a rare talent. After graduating from the prestigious Julliard School, Gaye decided to experience living in different parts of the country. She taught music in Minnesota, Kentucky and Mississippi. As a Pianist in Residence, Gaye relished the small town atmosphere. But she liked to mix things up and moved to Cambridge, Mass., in 1960.

Playing with the prestigious Boston Symphony Orchestra, Gaye reveled in classical medleys and chamber music. Over the years, she taught music as well as performed with the symphony. Gaye firmly believes this balance greatly enriched her life.

In 2019, Gaye moved into Cohen Florence Levine Estates, which is operated by Chelsea Jewish Lifecare. She is the first to admit she has “a captive audience” at the assisted living. “They have to listen to me!” she admitted.

“I have talent and there’s nobody here who can compete on the piano,” she said with a laugh.

When asked the secret to her longevity, Gaye, who looks much younger than her 85 years, attributed her good health to a bit of luck and a zest for living. She’s adamant that she doesn’t diet. She even admitted that “I eat lots of candy!”

For Gaye, aging gives her a unique perspective. “In a sense, getting older is like a puzzle,” Gaye explains. “When you reach a certain age, the pieces suddenly all fit together.”

A natural born shopper, Gaye confesses she loves to shop, especially for colorful clothing and bold jewelry. With her vibrant personality and sharp wit, Gaye’s wardrobe compliments her well.

Gaye enjoys life at the assisted living. “I feel so lucky to live here,” exclaimed Gaye. “After a time, you need assistance with a few things in your life, but I truly treasure my independence. Living here enables me to have both.” Gaye participates in the daily activities offered at the residence and looks forward to the social mealtimes.

Cohen Florence Levine Estates Executive Director Kristen Donnelly confirmed that the staff and residents clamor for Gaye to entertain them with her music. “Gaye is such a special member of our assisted living family,” said Donnelly. “In addition to being incredibly talented, she is personable, funny, warm, and friendly. Gaye Bennes is a true asset to our community.”

Today, Gaye plays the piano every day, either in her cozy Chelsea apartment or in the assisted living’s activities room. It’s not unusual for residents and staff to gather round the piano and sing while Gaye performs an impromptu medley of songs. As Gaye reflects upon her colorful life, she seems quite content. “The life I’ve led is exactly what I had hoped for,” she said with a smile. “How many people can say that?”