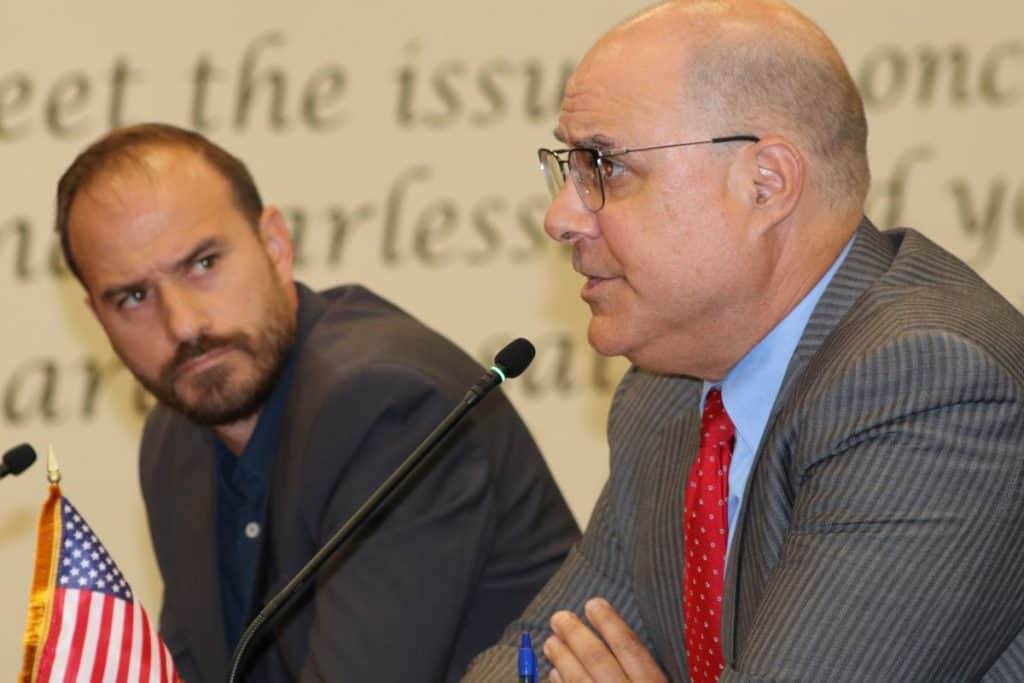 The City Council members voted 7-3 to reappoint City Clerk Sergio Cornelio to a five-year term during Monday’s Special Meeting at City Hall. Originally scheduled to be held in executive session, the decision came after a 7-3 vote to go back to the City Council floor. If they had voted the motion down, City Clerk Sergio Cornelio could have applied for the position again in a job posting.

The three-term City Clerk commented on the favorable motion to the Everett Advocate after the vote. “I’m feeling a lot of emotions right now, but mostly, I’m ecstatic to continue my service to the community,” Cornelio said.

During the meeting, Ward 2 Councillor Stephanie Martins asked what a neutral and impartial City Clerk (regarding a controversial paternity leave attempt last June) looked like to him. “Paternity leave doesn’t exist, and to me, that’s state fraud, and the money should be returned to taxpayers,” Martins said, adding that working from home hasn’t been authorized.

Attorney John Tocci, Esq., representing Cornelio, suggested that the questions that councillors asked were out of context, and declined to answer those. The City Clerk added that he used paid time off for his paternity leave – which was during an election season. Tocci noted Cornelio wanted bonding time with his children. “He used his accrued, unused time,” Tocci said. “If he wanted more time, he was allowed to get it, but it would be unpaid.”

Councillor-at-Large Michael Marchese said they’ve never not reappointed a City Clerk since 1996, suggesting to leave the politics out of it.

Ward 1 Councillor Wayne Matewsky, who voted for Joetta Yutkins five years ago, said Cornelio has done a great job. Matewsky advised Cornelio to be a little less political. “The city is divided over this,” Matewsky said. “I think you’d be better off if you had less activity politically and socially.”

Ward 6 Councillor Al Lattanzi said residents voted to approve a new charter, which removed lifetime tenure from the city clerk’s position. “If we did post this job, I’d like to see what’s out there,” Lattanzani said.

Councillor-at-Large Richard Delli Isola asked why Cornelio serves on the Election Commission, requesting him to step down from the Commission. Cornelio responded that he requested three times not to be a member of the Election Commission but claimed the charter wasn’t changed when former City Clerk Michael Matarazzo passed away. “At some point, we can change that,” Cornelio said.

Cornelio said he just wanted to do his job and go forward, adding that tension wasn’t anyone’s intention. “I love being here,” Cornelio said. “My family has been in Everett for 100+ years, and I intend to stay here.”

“He’s always been respectful and professional when I’ve spoken to him,” resident Bill Thompson said. “Do the right thing for a ‘yes’ vote if you think he deserves it – he needs six ‘yes’ votes.”

But contrary to Cornelio’s supporters, the controversial city clerk is embroiled in a defamation lawsuit with Mayor Carlo DeMaria, who is suing him for alleged statements that he made prior to the 2021 election to Everett Leader Herald journalist/publisher/editor Joshua Resnek, who is currently testifying in ongoing depositions for the lawsuit.

In Resnek’s deposition statements – currently being published in the Everett Advocate – Resnek admits to meeting with Cornelio, Cornelio’s parents and Boston Globe reporter Andrea Estes for two hours at a Malden restaurant after Mayor DeMaria’s lawsuit was filed. Resnek claimed, in two stories and editorials leading up to the 2021 primary and general election, that Cornelio said that the mayor was extorting him, among other allegations, into paying the mayor $96,000 for a Corey Street land deal. Resnek admitted during depositions that his quotes from Cornelio were fabricated and he never asked for any information for his claims against the mayor.

During Cornelio’s deposition it was discovered that the city clerk attempted to take a leave of absence from his job on a paternity leave during the birth of his child, attempting to write out a City Council document which, if signed by the City Council president, would allow the 12 weeks leave he was requesting. The city does not allow for paternity leave.

Following the City Council’s vote, Cornelio’s mother, Margaret, said she and her husband, Antonio, are happy with the results. “A lot of people have come to me telling me how much he helped them,” Margaret Cornelio said. “He’s the most genuine, hardworking guy around.”