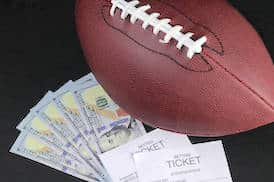 It has been a long three years since Massachusetts lawmakers formally approved legal sports betting in the Commonwealth. On Wednesday, Governor Charlie Baker played “Beat the Clock” when he signed into law a sports wagering bill that will allow both in-person and online betting— less than 24 hours before a Thursday deadline for new legislation to be offered and adopted for the year. The Governor’s bill signing finalizes what has been a three-year-long push to legalize sports betting in Massachusetts and bring the state into line with many of its neighbors.

Under the bill signed into law by the Governor on Wednesday, anyone at least 21 years old will be able to place a wager in Massachusetts, with a 15% tax on in-person wagers and a 20% tax on mobile bets.

Governor Baker took a historical tack when describing the story around signing the new bill. “Our administration first filed legislation to legalize sports wagering in the Commonwealth several years ago, and I am glad to be able to sign this bill into law today,” Governor Baker said in a statement.

“We appreciate the dedication and compromise that the Legislature demonstrated on this issue, and we look forward to supporting the work of the Massachusetts Gaming Commission on the responsible implementation of the law over the next several months,” Governor Baker added.

While there will be excitement in the Greater Boston area and beyond for the introduction of legal sports betting, state officials advised that “this isn’t something that is going to happen overnight,” or even in time for the fall NFL and college football seasons – two of the most heavily wagered seasons of the year, according to experts. According to reports, it may take until 2023 before people can place bets within the state on Boston and other sports teams.

Mass. Gaming Commissioner Brad Hill said regulators want to “take our time” with implementing the new law. “I want the public to understand, as we as commissioners are starting to understand, that this isn’t something that’s going to happen overnight,” Commissioner Hill said Wednesday night in a statement released by the Commission.

In an online report, Hill said, “I just want the public to be clear, at least from my view – I’m not speaking for the whole commission – but from my point of view, this is going to take a little longer than people probably anticipate. And I’m OK with that.”

One of the most anticipated related moves would be the introduction of a “sports book” site at Encore Boston Harbor in Everett, which already has a space in place at the casino inside its new sports bar, named WynnBET, which features 60-plus television screens for all the big games.

Mass. House Speaker Ronald Mariano said in an online report that it would be “disappointing” if implementation takes too long. “You’ve got two hotels that are ready to open the doors as quickly as you can,” he said. “I know Encore has built a room, and I know MGM is depending on this to increase their bottom line. So, I hope we can get it up and running … at least in time for fall football.”

The new sports wagering law Baker approved sets a 15% tax rate on in-person sports betting and 20% for mobile or digital wagering. It also allows for some collegiate sports betting, though residents cannot bet on Massachusetts colleges and universities “unless they are involved in a collegiate tournament,” according to the bill. March Madness, for example, is fair game for betting on Massachusetts schools.

The bill outlines three licensing categories: in-person wagering at casinos with some digital and mobile application options, in-person wagering at live or simulcast horse racing facilities, and fully mobile or digital wagering. Lawmakers incorporated what they said were myriad consumer protections into their bill, like not allowing people to use credit cards to place bets. Licensed mobile applications and digital platforms must also “prominently display” information for a problem gambling hotline, which will be overseen by the state Department of Public Health.

It is estimated that Massachusetts could reap from $60-65 million annually in new tax revenue.