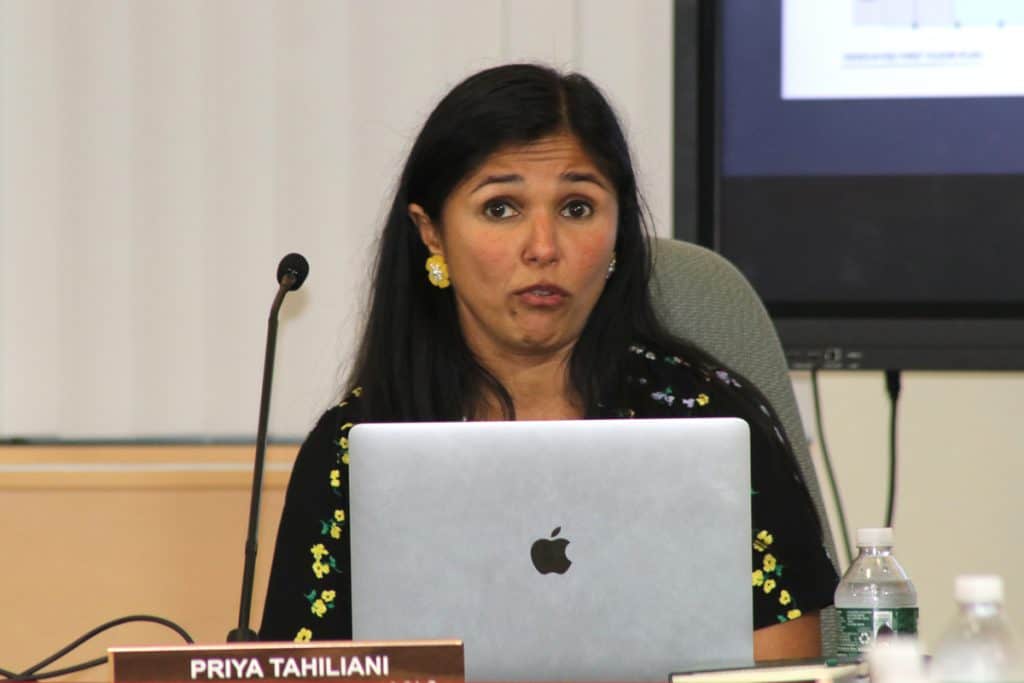 The School Committee voted to send a letter to the Mayor’s Office requesting to be included in a walk-through of the Pope John XIII facility, to determine if the former high school could help alleviate overcrowding, during their meeting at Everett High School on Monday night.

Superintendent of Schools Priya Tahiliani told the board that she would advocate moving seventh and eighth graders into the building; however, the decision doesn’t rest solely with her. She was quick to note that it won’t solve all problems – “1,200 students from 5 to 18 years old in grades K to 8 can’t be in one school,” Tahiliani said. “Two school buildings are required.”

If Pope John were to become a school, they would need to widen accessibility access into classrooms, and they’d need to hire additional staff, if they were to open this building. She also stated that the former school site has the backing of the Everett Teachers Association.

The plans that predated Tahiliani were based on a building comparison in 2018-2019 – modular units would cost $12 million; Pope John, $30 to 40 million; the old high school on Broadway, $145 million; and expanding the EHS campus, $67 million – all of which are with a hefty cushion, according to Tahiliani.

This option would eliminate overcrowding in all schools, except the Albert Parlin Junior High School, reducing overcapacity from 256 to 38 students.

School Committee Member at-Large Samantha Lambert said she has been advocating for a middle school for a long time. “Two waves of increased enrollment are coming in September and January,” Lambert said.

Tahiliani said she does believe a junior high is a successful model since she feels they’re more prepared when they get to high school age.

Ward 5 School Committee Member Marcony Almeida-Barros said it would pretty much reduce overcrowding tozero, except for the Parlin.

School Committee Member At-Large Cynthia Sarnie asked if it is true that children were in hallways and closets learning.

Tahiliani said they have restructured several closets to make them learning spaces. “There’s also small group instruction and intervention in the hallway, mostly in the elementary school,” Tahiliani said.

She asked Mayor Carlo DeMaria if he has done any cost analysis since the last meeting. DeMaria said the number to renovate Pope John in 2019 was $50 million. They have filed a Massachusetts School Building Authority (MSBA) application to build a new high school with CTE programming, and he prefers it at Rivergreen Park. That should be completed by February.

“People are starving, unable to pay their tax bills now,” DeMaria said. “Unfortunately, I have to steward the tax dollar – trying to make sure that we spend our money wisely.” He added that he’d love to be Santa Claus, but that it’s a balance.

Sarnie asked DeMaria how he feels about a potential change. DeMaria said he’s open to anything, adding that he’s the only School Committee representative who has a child in the school system.

DeMaria said the City of Everett bonded the Pope John building for $10 million. They built 77 units at St. Theresa’s, and the City Council took a vote a few years ago to buy Pope John for senior and veterans housing.

DeMaria said there are 600 kids at the old Everett High School along Broadway now. That would increase the asset that the City of Everett owns, if they use that option.

Ward 4 School Committee Member Michael Mangan asked if they can transition assistant principals instead of hiring people. Tahiliani said she is happy to explore that option, if they get to that point. She clarified that the $30 to $40 million conservative estimate was done this past week. The other plans were from 2018 to 2019.

“A school building is a need to have five years ago,” Tahiliani said. “We are here to advocate for the students.”

Mangan said Councillor-at-Large Stephanie Smith made a motion at last Monday’s meeting to tour the Pope John facility. He suggested to include School Committee members in that walk-through.

School Committee Chairman Jeanne Cristiano, who represents Ward 3, said we needed schools yesterday. They started at 506 students two weeks ago; now there’s 630 in the freshman class. “All these plans are great,” Cristiano said. “But we need action now.”

Cristiano said if she had a special education child being pulled out of his or her classroom, they already feel badly about learning differently. She asked DeMaria why he was shaking his head. DeMaria said interventionists take kids out of their classrooms for services. He said it’s been happening since 1991, when he graduated.

When he was explaining his own experience in school learning remedial math and reading classes, Cristiano said “that explains it.” DeMaria responded, “Excuse me?” taking exception to her remark.

“You should be ashamed of yourself,” DeMaria said. “I was trying to tell you about my own personal experience in school.”

DeMaria said he has to make sure that people can afford to live in the city and appreciated the need for more classrooms but Cristiano’s derogatory comment wasn’t called for.

“I don’t want to fight with you,” DeMaria said to Cristiano. “We’re neighbors and friends here.” He suggested working together, despite differences of opinion, and that he will visit the schools in the coming days.

Cristiano, a Pope John graduate – said the building was looking fabulous after she toured the facility last Friday afternoon.

Mangan said parents and neighbors said they all wanted a school during three neighborhood meetings that he attended. “That’s how I drew my conclusion,” Mangan said. “The council seems overwhelming in support of making it a school for the foreseeable future.”