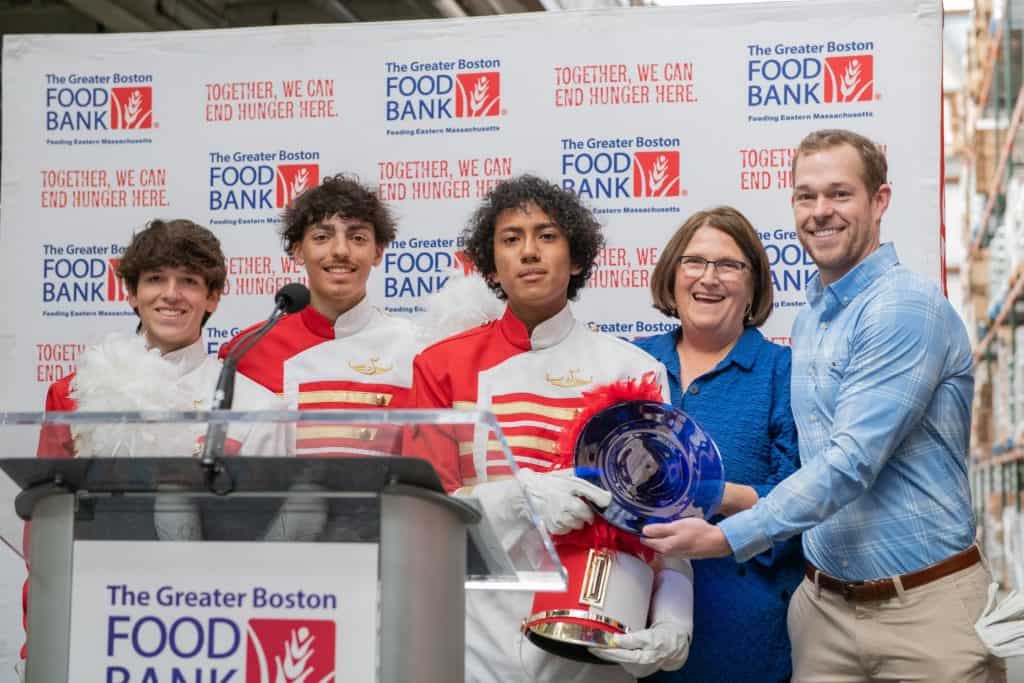 On Thursday, November 10, The Greater Boston Food Bank (GBFB) held its 17th annual Chain of Giving event in its original format, a tradition engaging civic and community leaders to draw awareness to the critical issue of food insecurity in our region and GBFB’s Hunger Free Holidays campaign in support of hunger relief this holiday season.

GBFB also presented the Everett High School Crimson Tide Marching Band with the Nally Award after a performance outside of the venue. Established in 2006, the Nally Award honors Danny and Betsy Nally from Westwood, Mass., and is given to a student or students who have made impactful contributions to ending hunger in their community. The first band to be reorganized in Massachusetts during the middle of the pandemic, the Everett High School Crimson Tide Marching Band has provided comfort to families when called upon for funerals and volunteered at many hunger-relief organizations, including GBFB’s partner Grace Food Pantry, Harvest on The Vine and Food Can Drives for the Homeless. Members Sal DiDomenico, Jr., Enrico Vega and Rocco Ortiz accepted the award.

“Everett High School is the most diverse high school in the state, and that diversity is reflected in the makeup of this nationally recognized performing arts group,” said D’Amato. “Their commitment to community service is just as strong for their love of music. They are exemplary community members who always say yes, ask how they can help, and give back to their community.”

Through December 31, GBFB is inviting individuals and teams to donate online in support of its Hunger Free Holidays campaign. This year, GBFB aims to provide 90 million healthy meals across 190 cities and towns in Eastern Massachusetts. More information on donating as a team or individual is available online at GBFB.org/Holidays.