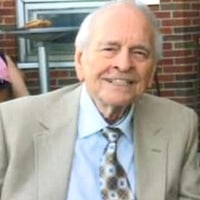 Of Everett, beloved husband, father, papa, great-grandfather and friend passed away at home surrounded by his family on Monday, September 5.

The oldest of four children, Joseph was born to the late Joseph and Raffaela (Cogliano) Colameta on March 10, 1930.  He graduated from Everett High School.  He was a U.S. Air Force veteran who served honorably during the Korean Conflict.  As a youth, Joseph served for twelve years as an altar boy at St. Anthony’s church in Everett.

Joseph was a long-time employee of Almy’s Department stores working his way up through the company from stock-boy to Director of Personnel serving on the company’s Board of Directors.  Joseph then worked for the City of Everett as Purchasing Agent during the Connolly administration. He finished his career working for Middlesex County Superior Court as Personnel Director.

Beloved husband of Marion L. (Thorne) for 65 years.  Devoted father of Patricia of Methuen, Paul of Everett, Philip and his wife, Dawn, of Everett, Joseph of Shrewsbury and Janet of Everett.  Loving papa of Stephanie Lyon and Jeremy MacRitchie of NH, Christopher Lyon of Illinois, Deanna and Scott DiCicco of Peabody and Kayla Colameta and her boyfriend Anthony Cruciotti of Peabody.  Beloved great-grandfather of Cameron and Ellie DiCicco and Archer and Alice MacRitchie.  Dear brother of Thelma DeVito and her husband Ralph, of NH, the late Robert and his wife, Eleanor and the late Richard, and his wife, Barbara.  Joseph is also survived by several loving nieces and nephews.

Relatives and friends were invited to pay their respects during visiting hours at the Cafasso & Sons Funeral Home, 65 Clark St. Everett on Thursday and again on Friday, September 9, at 9 a.m. with a Funeral Mass to follow at St. Anthony’s Church, 38 Oakes St., Everett at 10 a.m.  Interment, with US Air Force Military Honors, will be at the Puritan Lawn Memorial Park, Peabody.

In lieu of flowers, contributions in Joe’s memory may be made to the charity of one’s choice.