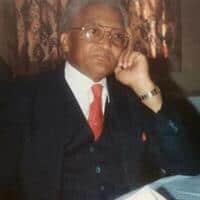 William Woodley was born to Wesley Davis and Pearl Woodley on September 7, 1934, in Nash County, North Carolina and raised by his loving grandparents William and Lula Woodley.  As a young man, William loved hunting, fishing, and teaching Sunday School.  William enlisted in the United States Air Force and served before being honorably discharged.

William moved to Boston, Massachusetts in 1957 where he met his wife Frances Dedeaux in 1958.  On November 20, 1960, they were married and to their union were added five children, William, Lorenzo, Annette, Bernadette, and Eric.

William was a loving and dedicated husband and father who formerly worked for E. Ciardi and Co. Inc. as a Restorer, he also owned and operated a cleaning business in the Boston area. William loved working on cars, had a great love of dogs, was an avid watch collector and enjoyed spending time with his friends and family.  William was active in church ministry and served as a Deacon.  William would often entertain his family by singing songs and hymns that inspired him and his love for God.  His unending love for his wife Frances inspired his children and the people he met along the way.  He was often praised for the love exemplified by his family, and everyone wanted to belong to The Woodley’s.  His open arms, dedication, and support shown to his wife Frances’ ministry played a significant role in many people receiving Christ as their Lord and Savior.