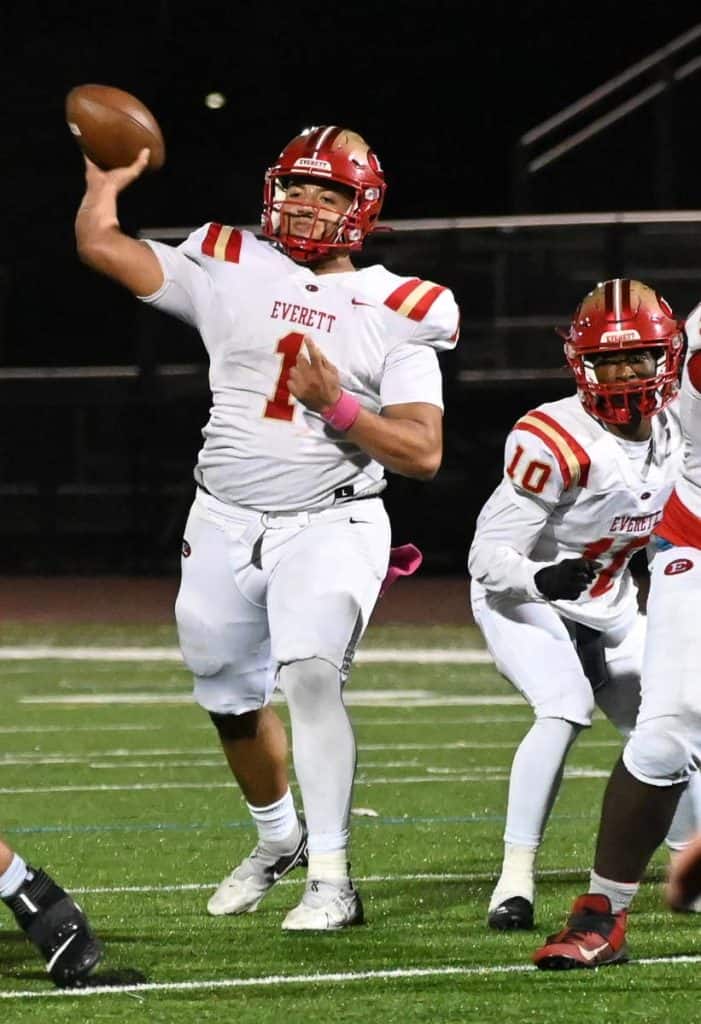 There’s no Thanksgiving Day game this year for the Everett Crimson Tide football team, but coach Rob DiLoreto promises that will change next year. But in the meantime, despite being eliminated by host Central Catholic (8-3, third seed), 21-0, from the Super Bowl playoffs in a Division 1 quarterfinal round game on Nov. 11, the Tide turned in another superlative season, ending up with an 8-2 record overall and 6-0 in the Greater Boston League (GBL) to win the title, once again.

As the 11th seed, the Everett boys defeated host Taunton (5-4, sixth seed) in a Round of 16 game, 33-14, before taking on the Raiders, who followed up their win over the Tide with a loss to St. John’s Prep (9-2, seventh seed) in a semifinal game on Nov. 18, 28-7. The Eagles will now take on Springfield Central (10-1, fourth seed) for the Super Bowl championship at Gillette Stadium on Dec. 3.

This is also award season, and the GBL all-star team was announced recently to kick off the process. Everett quarterback Karmarri Ellerbe was singled out as the league MVP for his many accomplishments this fall. He completed 50 passes out of 90 attempts for 737 yards and eight touchdowns. Throughout his scholastic career, he was credited with 19 touchdowns. He also ran the ball 84 times for 888 yards this fall with 10 touchdowns.

Teammate Jayden Prophete was also named a league all-star after rushing for 283 yards on 32 carries. Prophete threw one pass to Ellerbe this year for 38 yards, as well. He had five receiving touchdowns for a total of 27 yards to go along with two successful two-point conversions that completed scoring drives. He was also credited with two defensive touchdowns and six interceptions this year.

Damien Lackland (69 carries for 487 yards, five catches for 50 yards, 13 touchdowns), Christian Zamor (14 for 91 on the ground, 11 for 206 in the air, one rushing touchdown, three receiving touchdowns), Jaiden Williams (9 for 75 on the ground, two for 16 in the air, one rushing, one receiving, one defensive touchdown), Giacobbe Ward (18 catches, 309 yards, two receiving touchdowns, one interception), Domenic Papa (6 carries for 48 yards, caught two passes, one interception) and Ralph Pierre were also named league all-stars.