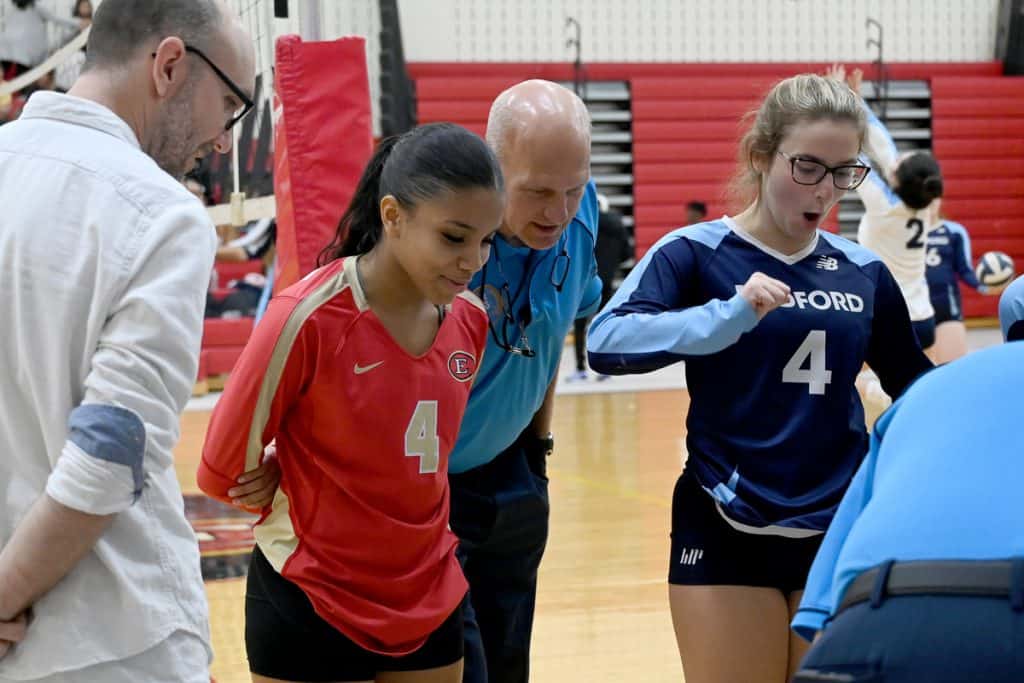 Nicole Brandao collected eight of her 19 kills when it counted the most in the fourth and fifth sets. Vanessa Almonte helped her out in those final two sets, coming up with four of her five kills in this match to go along with a block. Samela DeSouza Drumond and Julie Miranda kept feeding hitters throughout the match, according to Fineran, while Michelle Ngo was credited with five service points and two kills. She also had the play of the match, when she made a diving save that sealed the victory. Victoria Rodrigues served the final three points of the match, which gave her 20 on this day.

Everett’s second win of the year was another gutsy five-setter, this time over Lynn Classical. “It was good to see the team stop being afraid to lose,” said Fineran. “The clutch performers stepped up to ice the game against the Rams.”

“Victoria Rodrigues led the way against Classical with a perfect 26-for-26 in serves, including the game-winning point in the first set,” added Fineran. “She also chipped in with two aces, two kills, two digs and at least two point-saving hustle plays.”

“Sophia Souza had lots of good swings, and also her first kill was a beauty against the Rams,” added Fineran.

The Crimson Tide then earned their first 3-0 win in a home match against Lynn English. The locals rallied to take the first set before cruising in the next two.

DeSouza Drumond (1 kill) and Rodrigues (3 aces, 15 for 15 in serves) combined for 16 assists. Ngo came up with eight service points that included four aces, none bigger than the final point of the first set, according to Fineran. She also had four kills and a dig.

Jane Ebay came up with a dig, and Vanessa Almonte had six service points, eight kills, two blocks and a dig to help secure the shutout win. Alejandra Cajamarca produced eight service points, three aces and a dig. Emily Nogueira made seven service points and four aces. Nicole Brandao came up with five kills, one block and two digs. “Six of her seven service points came in that critical first set when we were down 24-19,” said Fineran. “It was a solid team win. We played smart and made adjustments, while making fewer mistakes as the match wore on. We had eight unforced errors in the third set, compared to 24 in the first set.”

The Tide made it two in a row in shutout wins after dominating Salem in the rematch later in the month. “Julie Miranda’s serving and setting helped climb the team out of an early hole to win the first set, 25-22,” said Fineran.

Consistent hitting from Vanessa Almonte and Nicole Brandao and solid defense from Victoria Rodrigues led the way in the second set win, 25-19. Julie Miranda then had two runs serving the ball in the third set, including scoring the last five points to help account for the 25-7 rout.

“Our passes and sets were good, and our middies were finding holes in the middle and down the lines,” said Fineran. “We adjusted to forget the mistakes quickly to minimize their better servers. We just got better as the match went on.”

After taking on Malden and Chelsea earlier this week, the Everett girls will welcome Lynn Classical to town later today (Friday, Oct. 7) for another Greater Boston League battle. They are then at Lynn English on Tuesday (Oct. 11), before coming home to go up against Somerville on Wednesday and Revere on Friday. On Oct. 21, Pioneer Charter School will come to Everett for a nonleague encounter, followed by Saugus five days later.