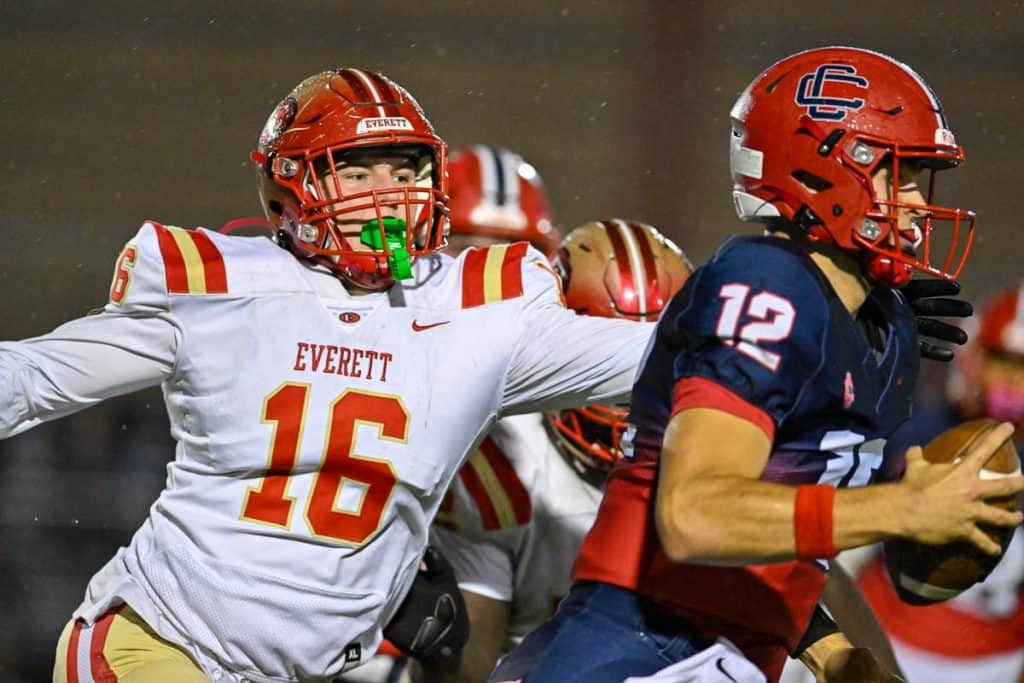 It’s the fate of the playoffs, where one loss means a team’s Super Bowl dreams are instantly wiped out. And when there’s no traditional Thanksgiving Day game to anticipate, it all seems so anticlimactic.

But with that said, the Tide gave Central Catholic all it could handle. After beating Braintree, 46-14, in a Round of 16 game the previous week, the Raiders were in a virtual dogfight for all intents and purposes against their GBL counterparts.

“Our team played very hard against Central Catholic, and I am very proud of our efforts,” said coach Rob DiLoreto. “We had a few costly turnovers and untimely penalties that no doubt made the game tougher for us. But our team still showed tremendous resiliency by giving our very best right through the final snap of the game.”

Senior quarterback Karmarri Ellerbe completed nine passes for 98 yards and rushed for another 43 on 17 carries. Senior running back Chandler Timoleon was credited with 39 yards on eight carries. Altogether, the Tide ran the ball 33 times for 91 yards. Senior tight end Kevin Ruiz caught two passes for 41 yards, and Giacobbe Ward was on the receiving end of three passes by Ellerbe for 35 yards. Juniors Christian Zamor (13 yards) and Pedro Rodrigues (11 yards) each accounted for one reception.

“We all wish we were playing on Thanksgiving this year, but we also know that not having a game this season is out of our control,” he added. “Masconomet ended the rivalry with us a few years ago.  Last year, we played St. John’s of Shrewsbury, but they decided to play Malden Catholic, so as a result we are now searching for another Thanksgiving Day rival.”

But overall, DiLoreto sees nothing but positives emanating from his squad this year. “This season, our team showed tremendous growth and improvement,” he said after last Friday’s Central Catholic game. “Our senior class showed tremendous leadership, and every one of them will be dearly missed. Looking ahead, we have many starters returning on both sides of the ball, so we are confident we will field, once again, a very competitive team in 2023.”