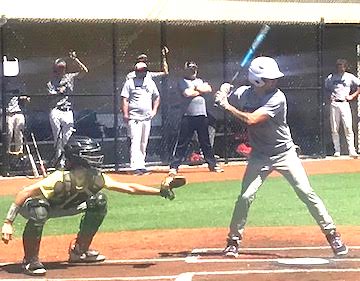 Everett, Malden, Saugus and Revere residents contributing to success on the diamond this season

Summer can be a time when everyone steps back and takes a few moments, days or even weeks to relax and “recharge the batteries”.

When it comes to baseball, however, nothing slows down in the summer. Just the opposite: It all ramps up for baseball players. Why do you think they call them the “Boys of Summer” anyway?

For the past six years, the Powers Brothers, Manny and Nick have run the Malden Marlins franchise in the CABL, and just like their high school days, are some of the best players in the league still, as they approach their 30s.

Manny Powers, a 2012 Malden Catholic grad and Nick Powers, a 2013 Malden High graduate, were named to their 5th consecutive CABL All-Star Team and were joined by three of their Marlins teammates, including two other former Malden residents, Ricky Mendez (Malden High 2013) and Connor Mulcahy (Malden Catholic 2012).

The league was split in half for the purposes of the All-Star Game and the team the Malden Marlins were on won the game, 3-0, led by the hitting of Manny Powers, Mendez and Mulcahy. Nick Powers hurled a scoreless seventh for the save.

Malden High School assistant baseball coach Mike DiCato is the top pitcher in the Boston Men’s Baseball League (BMBL) 28-Plus Division and was recently named Pitcher of the Month for June for recording three impressive wins for his team, the Boston Dodgers.

DiCato, a former Malden Catholic Division 1 Player of the Year in 2005 and a UMass-Amherst record-setting pitcher, leads the league in nearly every statistical category.

He is 5-2 on the mound for the Dodgers with six complete games and is the league leader in wins (5), innings pitched (48) and strikeouts (69).

Perhaps his most impressive stat? Aside from the 69 strikeouts in 48 innings, DiCato has walked only SIX (6) batters! That’s 69-6 strikeouts to walks ratio!

No lie: He might be leading the NATION in that category for men’s league baseball.

Recent Saugus High Class of 2022 graduate Nathan Ing has been one of the top baseball players in the Northeastern Conference (NEC) for the past three years, both on the mound and at the plate.

Ing took a big step forward this summer when he joined the roster of the league-leading Champions Pub team out of Peabody in the prestigious North Shore League.

The North Shore League is one of the leading men’s baseball leagues in the region.

Ing has fit in nicely on a team full of experienced players like longtime legends Jon Cahill and Mike Giardi, mixed with newcomers like the Saugus All-Star.

The 6-2, 220 Ing, who was a key contributor to success of the Saugus Sachems the past three years, is headed for Bentley University in Waltham where he intends to pursue his academic and baseball career.

Popp plays for the Giants Elite travel team out of The Dugout in Lynn and before the summer end is planning on participating in The Lynn Invitational Showcase Tournament August 10-12. Also in the works is a trip to Florida to take part in a National JUCO Showcase event in Ocala, Fl. in mid-August.

Everett’s Marshall, also an outfielder and pitcher, plays for the Legends Baseball Expos this summer and has taken part in a number of nationally-recognized tournaments this summer.