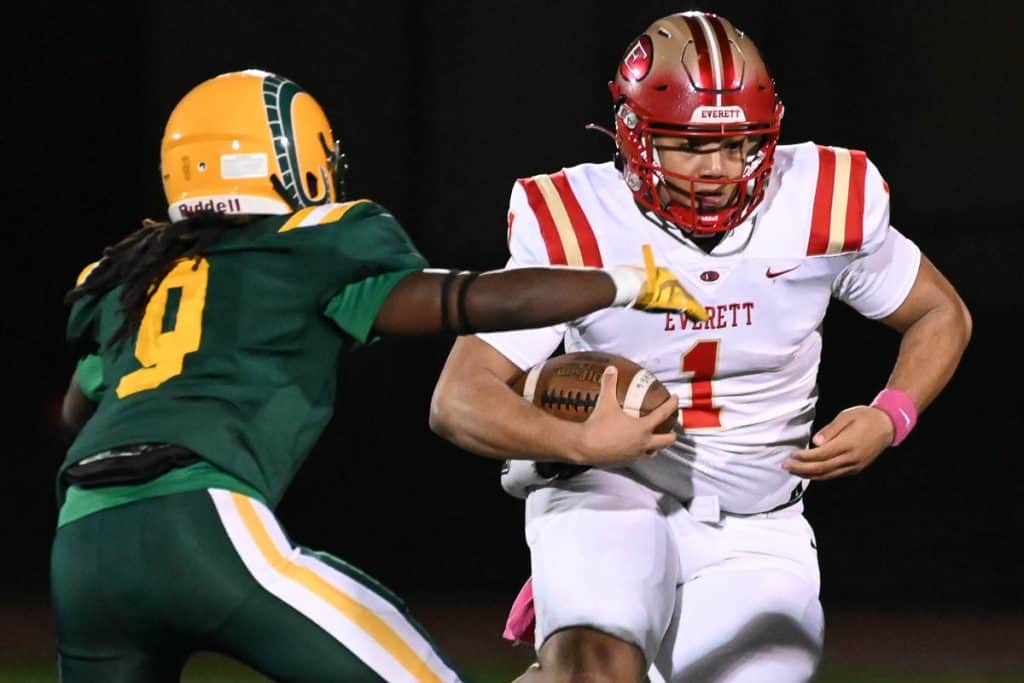 The Everett High School football team (7-1 overall, 6-0 in the Greater Boston League [GBL]) has been dominating GBL rivals all season long, but probably its most important victory came last Friday night (Oct. 28) at Lynn’s Manning Field against Lynn Classical (5-2 overall, 4-1 In the GBL). The Crimson Tide (5-0) entered the contest one game ahead of the second-place Rams (4-0) in the GBL, but by game’s end coach Rob DiLoreto’s squad emerged unscathed once again after posting a 31-0 drubbing over the home team. As a result, the Everett boys begin the Division 1 playoffs as the 11th seed, and they will face host Taunton (5-3), the sixth seed, in a Round of 16 game Friday night (Nov. 5), starting at 7 p.m., while the Rams, the 15th seed, have the dubious honor of taking on undefeated Andover (8-0), the second seed, in Andover.

“I was very proud of our effort against a very physical Lynn Classical team,” said DiLoreto. “Our kickoff team set the tone early on by creating a big turnover, which led to a touchdown [in the second quarter]. They also ended up leading us to another touchdown. [Those plays] turned out to be big factors in the outcome of the game.”

“But we still know we need to play our very best game of the year away from home against Taunton to begin the playoffs Friday night,” added the veteran high school coach.

After a scoreless first quarter, the Tide scored 12 second-quarter points. Damien Lackland ignited the offense with a two-yard touchdown run, which also ended up being the game-winning points. The special teams then began tacking on the insurance points when Angel Diaz recovered a fumble and proceeded to run the final five yards to account for his team’s second score.

Quarterback Karmarri Ellerbe produced the first touchdown of the second half with a six-yard run to extend the lead to 18-0. Lackland made it 24-0 with a 31-yard burst from scrimmage, and he was also credited with the team’s final score of the game in the fourth quarter after successfully negotiating the final four yards to pay dirt. Adoni Santos followed by kicking the extra point through the uprights to seal the 31-0 verdict.

But now, it’s all about the playoffs, where one loss ends a team’s Super Bowl dreams, while also being relegated to consolation games to complete the regular season. Despite having a better record than Taunton, the power rankings dictate for Everett to take a long trip to that school. But DiLoreto promises that his team will be prepared to face them.

“Our coaching staff was hard at work studying film on Taunton after finding out on Monday we’ll be playing them,” he said. “My own film study and gameplan preparation usually begins very early Saturday morning, so this is a very short week for me. But we will get the work in to properly prepare the team. We are naturally very excited about qualifying for the playoffs, and will do our best to represent Everett with pride.”