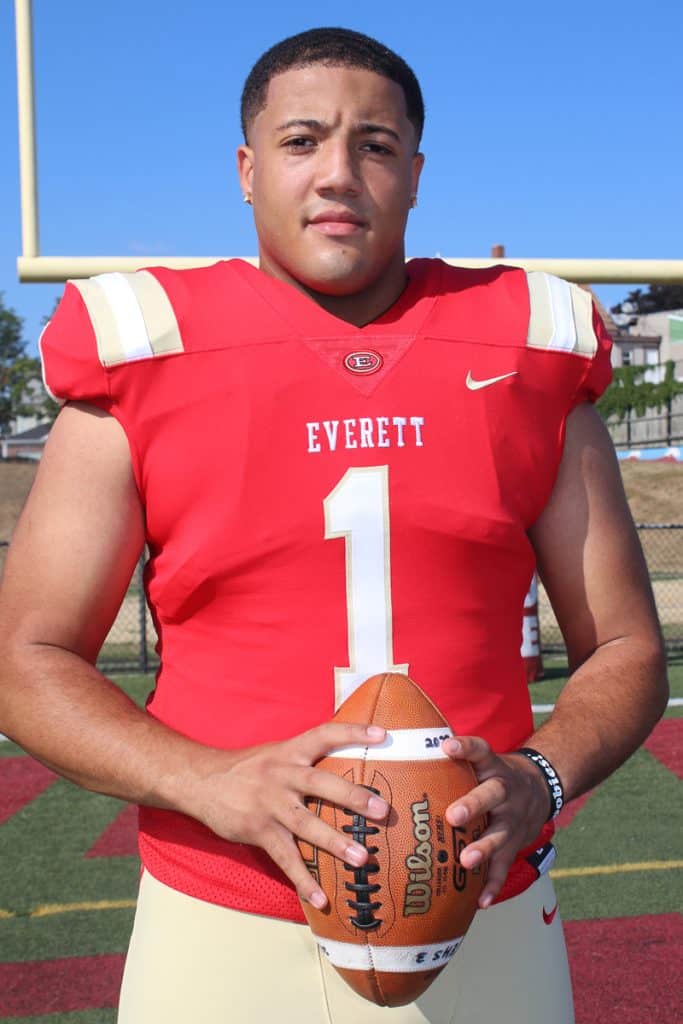 The Everett High School football team (3-1) has now won three in a row after dropping its season opener to nonleague host Xaverian. The Crimson Tide’s latest win was against BC High, another Catholic Conference team, last Friday night (Sept. 30) on the road in Weymouth to the tune of 42-16. They had a 28-8 halftime lead and as a result cruised the rest of the way.

“Our team played a very clean game against BC High, and I am very proud of our effort and performance,” said coach Rob DiLoreto. “We hope to build off this win and continue to improve this week by preparing hard and working hard on the practice field [for this week’s game against visiting Revere on Friday night, Oct. 7, at 6 p.m.].”

“Winning builds confidence, and I hope the players are feeling more confident at this point,” added DiLoreto.

Damien Lackland ignited the offense in the first quarter with a one-yard run, and Jayden Prophete followed with another running play on the two-point conversion attempt. The Eagles then tied it up before their Everett visitors broke the game wide open.

Prophete scampered for a 20-yard touchdown run to give his teammates the lead; once again. Quarterback Karmarri Ellerbe decided to get in the fun after calling his own number with a four-yard run for six more points. Adoni Santos kicked the extra point to complete the team’s first score of the second quarter. Ellerbe then showed off his arm while hooking up with Christian Zamor for a 61-yard scoring strike. Santos nailed another successful extra point to extend the Everett lead to 20 points heading into the break, 28-8.

Just like he did in the first quarter, Lackland opened up the scoring, this time in the second half on a 34-yard touchdown run. Santos booted another successful extra point, and the rout was on, with the Tide now in front, 35-8.

In the fourth quarter, Ellerbe closed out the Everett offense with a two-yard run to paydirt. Santos tacked on the final explanation point with another kick through the uprights.

The Eagles did, however, get into double digits with a special teams fourth quarter score on an 84-yard kickoff return for six points, followed by another successful two-point conversion try to account for the final score.

DiLoreto had high praise for his players after this satisfying win over a traditional Catholic Conference powerhouse, including Ellerbe, who rushed for two touchdowns and threw for another. “I felt [Ellerbe] made some big throws for us and also made some nice reads in the run game,” said the veteran coach. “Our offensive line also played very well as one unit, opening up some nice holes for our running backs, and on defense [Prophete] led the way with three interceptions. Dom Papa and David DeSouza also played well on that side of the ball.”

The Tide coach is now looking ahead to Friday night’s home game against the aforementioned Revere. “Revere is extremely well-coached. They have won three straight games, like us, and are a very talented team. We know we need to play our very best on Friday night against them.”