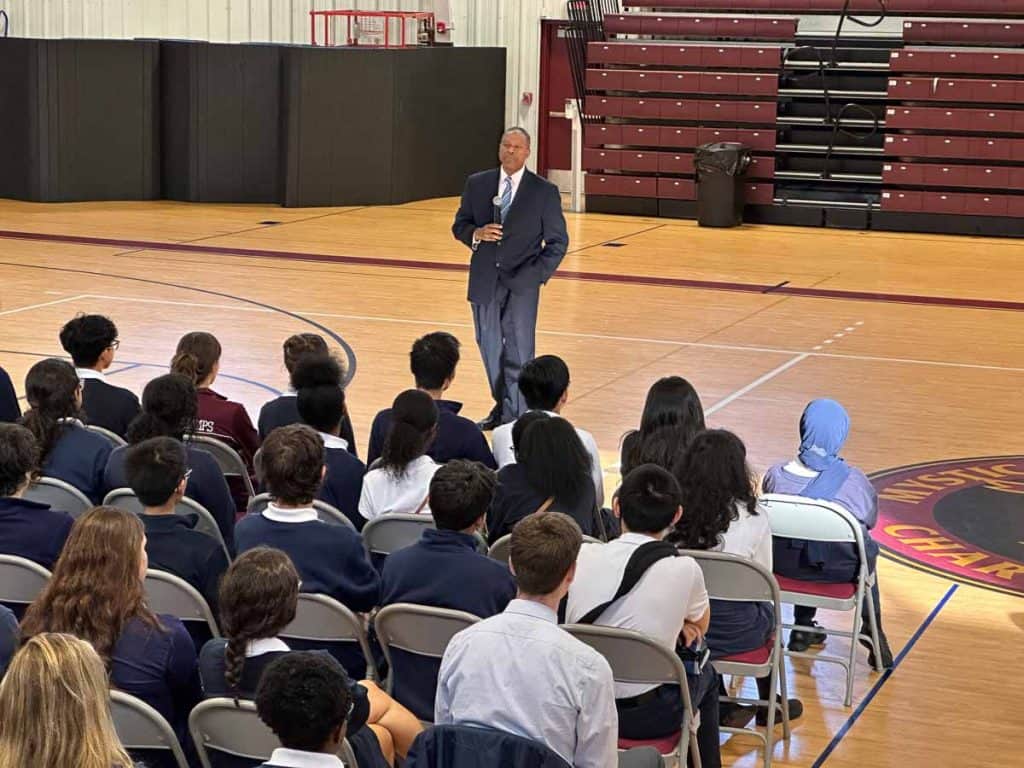 MVRCS started its 10th annual American Heritage Week last month with an assembly for grades 9-12. Gerard Robinson, who served as secretary of education in the Commonwealth of Virginia, and is an alumnus of the Harvard Graduate School of Education, was this year’s keynote speaker.

In addition to his role as co-host for “The Learning Curve” podcast, he is a fellow of practice at the Institute for Advanced Studies in Culture at the University of Virginia. Following his presentation, Mr. Robinson met individually with junior and senior student government officers, discussing his background and career path, and engaging in a productive exchange of ideas.

In his keynote address, Mr. Robinson explained how Boston, education in general, and his own family story were impacted by the concept of sacrifice. As an example of sacrifice, Robinson explored John Adams’s decision to defend the British soldiers involved in the Boston Massacre, damaging his own reputation in the process, to defend the American ideal of innocent until proven guilty. He also pointed to the Felix Petition of 1773; a document written by Bostonian enslaved Africans to free themselves from bondage before our country even existed. This laid the groundwork for social movements and legal precedents which would decades later open the door for his father’s great-uncle to run away from a Virginia plantation to join the Union Army to fight to put an end to America’s peculiar institution.

Finally, Mr. Robinson addressed how American education was born through sacrifice by discussing its foundation in the Northwest Ordinance of 1787, connecting this origin with the creation of modern-day charter schools.