From NECC student to Kiss 108 cohost: An alumnus reflects on his career journey 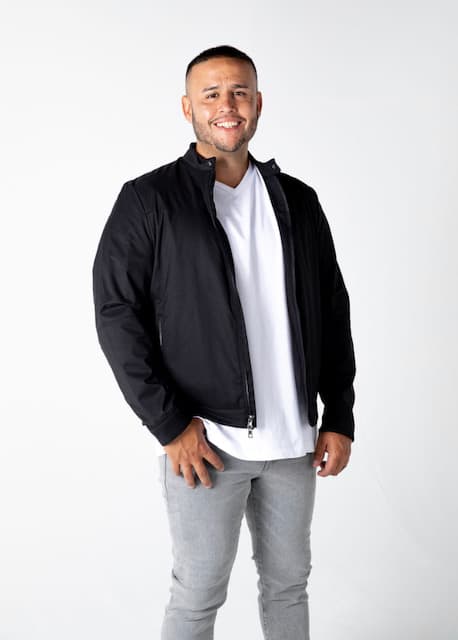 For many people living in Massachusetts and beyond, Justin Aguirre is a voice that eases them into the workday each morning. A cohost of the popular “Billy & Lisa in the Morning” show (previously “Matty in the Morning”) on Kiss 108 Boston, he has long kept people laughing and entertained through their daily commutes. What many don’t know is that long before his success on air he was a journalism/communications student at Northern Essex Community College.

The Salem, N.H., resident, who is originally from Malden, says he began attending NECC in 2006, at a time when he found himself in need of a critical change of pace. “I was just getting my life together after several years of issues with addiction,” he explained. “A mentor of mine suggested I look into Northern Essex because I had an interest in media and he knew they had a strong media program.”

At his mentor’s urging, Aguirre successfully enrolled in NECC’s journalism/communication program, but admits that it took him some time – and some strong encouragement – to gain the confidence he needed to succeed. “When I got to NECC, I had a few months in recovery and a criminal record that I was convinced would prevent me from reaching any goal of mine. It was the push of my professors that gave me the confidence to go after my goals.”

By 2009, equipped with a fresh set of professional skills from NECC, he successfully obtained an associate degree and transferred to Salem State University, where he landed a coveted internship on the Ramiro and Pebbles JAM’N 94.5 Morning Show – another important turning point in his career. “I grew up listening to KISS 108 and JAM’N 94.5 and always dreamed of working at one of those radio stations in the morning,” he says.

Aguirre was eventually hired by JAM’N 94.5 as a part-time producer and, from there, moved on to Kiss 108, working first as a producer for Ryan Seacrest and later for Matt Siegel of “Matty in the Morning.”

The day that Siegel first asked him to be part of the show, he adds, is one that particularly stands out to him. He had just gotten through with interviewing Bono and The Edge of U2 – two of the biggest stars he’d had the honor of meeting at that point in his career – when Siegel pulled him aside and extended him the offer to join as a producer. Aguirre’s feelings on the offer were initially mixed; he confessed to Siegel that his rocky past might not go over well with their listeners. But Siegel waved off such concerns right away. “He said two things to me,” Aguirre says. “One: ‘you don’t have to worry about anything; I have your back.’ And two: ‘That’s the coolest story I’ve ever heard – now nobody will mess with me!’”

Few can argue the successful rise that Aguirre has had since. Following the announcement of Siegel’s retirement in May, Aguirre was promoted to his current role as cohost and executive producer of the “Billy & Lisa in the Morning” show, a position that has him waking up at 3 a.m., hosting live shows from 5 to 10 a.m., and a podcast, “The After Show,” until noon.

It’s a job, he says, that while often nonstop, continues to reap incredible rewards. “Everyone has problems in their lives, but providing a show [people] can routinely listen to and making them smile and laugh is really special to me,” he says.

His advice to NECC students looking to pursue a similar path? “Figure out what it is you want to do with your life and go after it no matter what! Learn as much as you can, but, most importantly, never stop learning. Always keep an open mind and open ears!”