It is said in Malden… 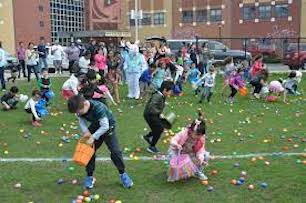 That Ramadan – the holy month of fasting from dawn to sunset, introspection and prayer for Muslims, the followers of Islam – begins today, April 1, and continues until May 1.

That Ward 8 Councillor Jadeane Sica and City Council President/Councillor-at-Large Craig Spadafora will be hosting their Annual Easter Egg Hunt on Saturday, April 16, at 10 a.m. at Linden Park/Hunting Field, but would be using a different format for the “Hunt,” with details coming soon.

That Ward 6 Councillor Stephen Winslow reminds Malden residents there will be Malden River cleanups planned this Sunday, April 3 – one at 10:00 a.m. and a second at 12:15 p.m. – and that any volunteers can report to the banks of the river behind the Malden DPW facility (356 Commercial St.) about 15 minutes before those start times.

That Malden Fire Dept. personnel recently came to the rescue of a student who was temporarily disabled and using a two-handed walker who had been stuck in one of the elevators at Malden High School. The student was extricated quickly, unharmed.

That two of the coldest days of this – or any – spring were recorded this year on Monday and Tuesday morning, with temperatures reading 17 degrees (with a wind chill making it plummet to near 0 degrees) on Monday morning during the commuting hours and even lower on Tuesday morning – 15 degrees at 6:00 a.m.

That predictably, the “only in New England” weather was scheduled to bring us partly sunny skies and temperatures in the low 60s on Thursday, which would be 45 degrees warmer than on Tuesday morning, about 72 hours later.

That the Malden High School Varsity Boys Lacrosse team was the first Golden Tornados squad to open the Spring Season, hosting Lynn Classical in a Greater Boston League (GBL) matchup yesterday at Macdonald Stadium, with the results not available until after press time.

That the Malden High School Varsity Baseball team will be the first in this area to open the high school season when the Golden Tornados boys host Salem Academy Charter School Navigators at Maplewood Park on Saturday at 11:00 a.m.

That “Pothole Season” is most definitely arrived, and Malden Director of Public Works Director Bob Knox urges all residents to report these and other issues by Googling See/click/fix Malden, and it will give you directions on how to report the issue. If you go to the portal, it allows you to see actual, real-life issues, like potholes, and tells if they were resolved.