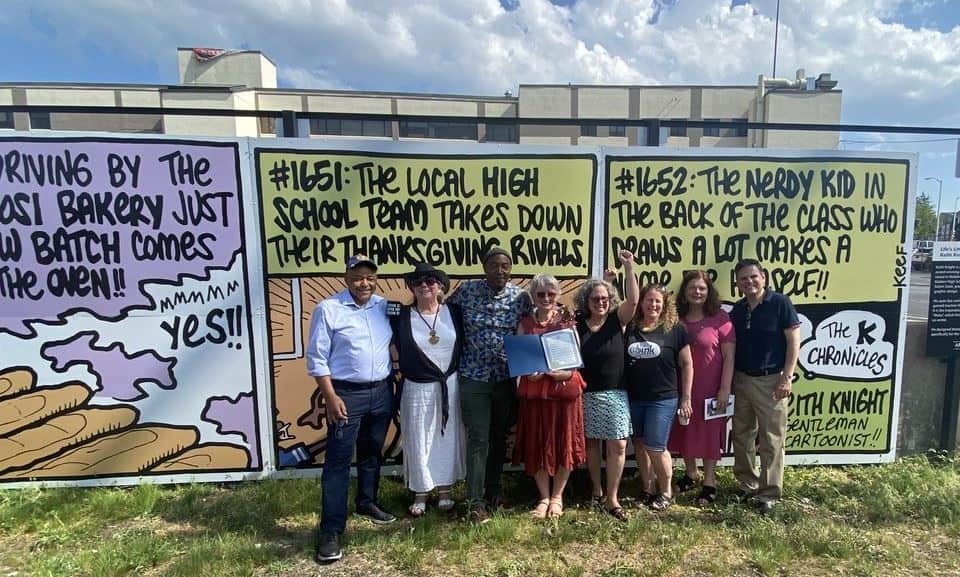 Mayor Gary Christenson recently joined members of Malden Arts, artist Keith Knight, Jr., his family and residents for an unveiling of the Keith Knight Mural along the Northern Strand Community Trail behind The Breakfast Club (formerly Doo Wop Diner). Mayor Christenson proclaimed May 22, 2022, as “Keith Knight, Jr. Day” in Malden, Mass. All are encouraged to come and view the artwork and enjoy the trail.

Keith Knight, Jr. – a nationally syndicated, award-winning cartoonist born and raised in Malden – is a 1984 Malden High School graduate. In his early years he was known as a Michael Jackson impersonator; he later became a popular rapper and musician. His autobio comic, “The K Chronicles,” was the inspiration for the Hulu show “Woke,” which he cocreated and wrote. Keith is well-known for using his unique style and talent to address political, social and racial issues through his art. He has also led panels at college campuses, comedy clubs, libraries and churches to help educate on various community topics and create environments of inclusion and acceptance.

Keith’s willingness to use his skills as an artist and a writer to make a difference led the Malden Arts ARTLine to honor Keith. The idea of the Malden Arts ARTLine came after a visit to the Ed Emberley retrospective at the Worcester Art Museum in 2017. Members identified four living Malden-born artists, writers and musicians whom they invited back to Malden to celebrate their contributions to the arts with public murals in Malden. The members started with the oldest, and the Ed Emberley mural, which was designed by Naomi Kahn and painted by high school art students using Ed Emberley drawing books for inspiration, was unveiled with Ed and family in attendance on Exchange Street on May 23, 2018. This was followed by two more celebrity visits: from musician Norman Greenbaum in October 2019 for the “Spirit in the Sky” mural unveiling – art by Jesse Melanson, location also on Exchange Street – and, in December 2019, Frank Stella, who unveiled the “Frank Stella Mural” on Malden High School. The youngest of the four artists, Keith Knight, during the pandemic years came up with a Malden-centric take on his comic strip “Life’s Little Victories.” The unveiling of the Keith Knight Mural was almost four years to the day, May 22, 2022, from the first mural, the Emberley, on May 23, 2018.