Malden Catholic’s Make-A-Wish Club grants the 4th wish in 4 years – donates $12,500 to Make-A-Wish® Massachusetts and Rhode Island to provide a parrot for RJ 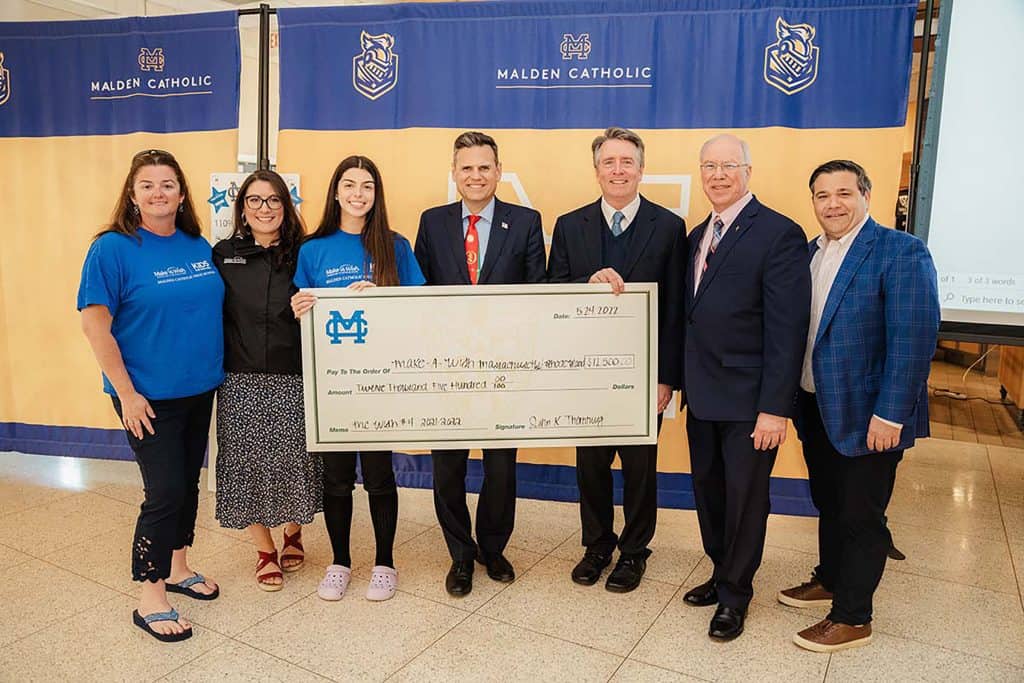 RJ, 10, of Malden, is full of love for his family and for animals. When he was diagnosed with Hodgkin lymphoma, one of the activities that helped distract him from the discomfort and stress of his illness was watching animal videos. He has especially loved exotic birds and watching trainers work with them. Inspired by this love, he wished for his very own parrot. The anticipation of his wish coming true helped RJ keep a positive attitude as he regained strength following his treatment.

When Zeus was old enough to travel, RJ and his family were escorted by limousine to pick up the young bird at the airport and bring him home. RJ is proud to care for Zeus and is especially excited about teaching him to talk. He and his grandma are working together to train the bird. So far, Zeus can say “Thank you,” and RJ has a growing list of other words he plans to teach him. According to RJ, “Zeus is literally the best animal I could ever have.” Watch on YouTube: https://www.youtube.com/watch?v=r3QLqY_TYoo

Over the last four years, MC Make-A-Wish Club members and parents have joined together to raise money through a variety of events, candy grams and product sales to provide four wishes to children in need. “This served as a reminder that with a community working together, we can provide renewed hope and uplifting joy when it is needed most,” stated MC President John Thornburg.

About Make-A-Wish® Massachusetts and Rhode Island

Make-A-Wish® Foundation of Massachusetts & Rhode Island (massri.wish.org) creates life-changing wishes for children with critical illnesses. They seek to bring every eligible child’s wish to life because a wish is an integral part of a child’s treatment journey. Research shows children who have wishes granted can build the physical and emotional strength they need to fight their illness. Since 1987, the organization has granted more than 8,500 wishes for children in Massachusetts and Rhode Island.