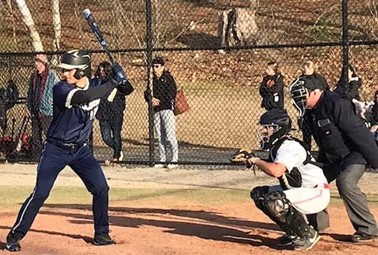 Spring sports are off to a great start in Malden High Golden Tornado country as all of the teams are off to winning starts. Leading the way for Malden are the Boys Volleyball and Boys Lacrosse teams, which have both started unbeaten at 4-0. Right behind them are the Boys and Girls Tennis teams, which both won this week to check in at 3-2.

The Malden High Baseball Team is at 2-3 overall with a split this week. On Monday Malden topped Chelsea on the road, but dropped a game to Lynn Classical on the road at Fraser Field on Wednesday in a 9-3 final.

Malden High got home run blasts from freshman catcher Bo Stead and senior outfielder Jordan Rodriguez to power their way to a big win over host Chelsea High on Monday. It was the first career homer for both players as the 9th grader Stead went a yard over the left field fence, a three-run jack, in the first inning, and Rodriguez, a first-year player for Malden after transferring from another school, boomed a long shot way over the centerfielder’s head for his roundtripper in the fourth inning.

Sophomore righthander Jake Simpson earned his first career pitching win with no hits and no runs allowed while he was on the mound. Junior Kyle Wilson kept the shutout going in his one-inning varsity debut, while soph Saul Kruckenberg did the same in a one-inning stint.

The Tornados could not avoid the “One Bad Inning” syndrome on Wednesday, surrendering six runs in the fourth inning (three unearned) on the road against Lynn Classical in an eventual 9-3 loss. Malden scored all of its runs in its last at bat on singles by Coggswell and Noelsaint along with an RBI double by Ortega. Classical got its fifth win in a row to start the season (5-0 overall, 4-0 GBL), atop the league along with Somerville (4-0).

Baseball is back in action Monday, on the road at Tony Conigliaro Field at Revere High on Patriots’ Day for a 10:00 a.m. game. The Tornado squad will stay busy next Friday, hosting the 7th Christie Serino Memorial Classic Baseball Tournament at Maplewood Park in Malden. Malden will play Greater Lawrence Tech at 10:30 a.m. at Maplewood Park to open the tournament. Somerville squares off with East Boston in the other first-round game. The winners will square off at 1:00 p.m. for the Serino Classic Championship while the two other teams will play a consolation game at 1:00 at Rotondi Field, which is in the same complex.

Malden High Boys Lacrosse is off to its best season start ever at a perfect 4-0, following a 9-0 shutout win over host Revere on the road on Tuesday. Malden got four goals from sophomore Chad Robertson in the win and a shutout performance in goal by senior Aidan Jordan. Head Coach Jon Copithorne’s squad also registered decisive wins over GBLer Somerville (15-8) on April 7 and then over non-leaguer Salem High (10-1) on April 8.

Malden was scheduled to be back in action on the road against defending GBL Champ Medford High yesterday (Thursday) after Advocate press deadline.

Looking ahead, Malden returns to action with a 4:00 p.m. game on the road against Lynn Classical on Tuesday, April 19. A rematch with Somerville at home on Monday, April 25 (4:00 p.m. start) at Macdonald Stadium awaits the Tornado team next week.

Head Coach Dan Jurkowski’s Malden High Boys Volleyball team stayed perfect on Wednesday with a 3-0 sweep on the road over Essex Tech, improving to 4-0 as a team. Led by senior co-captains Kingson Chen and Yoji Yonetani, Malden has been “extra-perfect,” winning every single set in the four-game season start. Malden swept Madison Park in its opener, then beat Boston Latin Academy, 3-0, on April 6 and GBLer Somerville, 3-0, on April 11.

The Tornados were back in action on Thursday on the road to Boston against O’Bryant International High School at 4:00 p.m. Malden plays during April Vacation Week against Revere at home (12:15 p.m. start) on Wednesday, April 20 and then again on Thursday, April 21 at home at 11:30 a.m.

The Malden High Girls Tennis Team is off to a great start this season, rolling out to a perfect 4-0 record overall with a close, 3-2 win over Lynn Classical on Wednesday. Malden also beat Revere 4-1 recently to up the record to 3-0.