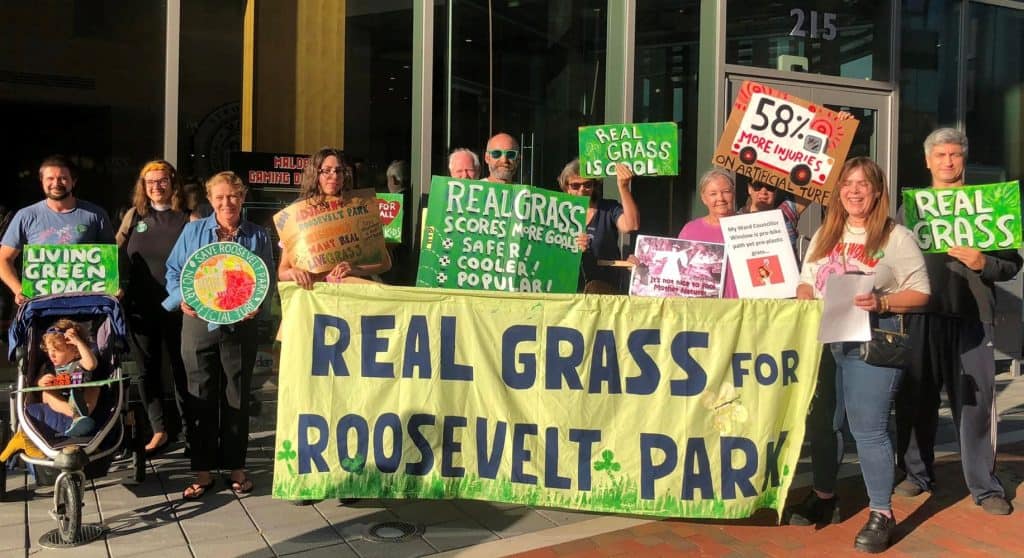 Boston’s ban on new toxic turf fields, citing toxic PFAS chemicals, made world news in The Guardian on Sept. 30. “The city has a preference for grass playing surfaces wherever possible and will not be installing playing surfaces with PFAS chemicals moving forward,” The Guardian quoted from a statement from a spokesperson for Boston Mayor Michelle Wu. Amid a growing global climate crisis, Wu’s winning climate justice platform is shaping Boston’s policies to protect public health with clean air and water, fight for environmental justice communities and expand Boston’s green spaces.

Malden city officials have targeted this less affluent, more diverse neighborhood with yet another toxic turf field. This would bring the total up to five toxic turf fields in a neighborhood already burdened by a toxic legacy of industry, redlining and an urban heat island. Toxic turf fields are already clustered in this area of the city, and Roosevelt Park is the last living green space in Precinct 1 of Malden’s Ward 5. While concurrent renovations planned around Malden’s other public parks prioritize living grass athletic fields, no toxic turf fields are planned for more affluent neighborhoods. Malden’s official current plan seeks to permanently remove over two acres of living green space to install toxic plastic turf.

Many school-community parents, teachers, adjacent neighbors and allies have signed petitions and spoken to city officials in favor of removing toxic lead soil, restoring the living grass field and maintaining the mature trees already growing there. They ask that the City of Malden commits to a new plan inclusive of the school and neighbor stakeholders excluded from the planning and design process.

The Friends of Roosevelt Park (FoRP) has gathered support and led recent victories in pushing for preserving this urban living green space: In May, social and environmental justice groups NAACP, MaldenCORE and Friends of the Malden River joined the Malden Community Preservation Committee and FoRP in urging city officials to halt toxic turf plans in favor of living grass. In July, FoRP’s objections spurred the U.S. Department of Housing and Urban Development (HUD) to question Malden leadership on the plan’s environmental justice failures. FoRP also gathered enough signatures to require Malden city officials to host a meeting for residents to express concerns around toxic turf’s PFAS chemicals, increased risk of injury, intensifying and enlarging the urban heat island or removing public living green space. The City of Malden held two meetings in September, but officials have yet to heed calls for project revision.

Malden residents are also finding hope in seeing that the U.S. Environmental Protection Agency (EPA) is starting to hold toxic turf accountable for hazards and pollution. On August 26, the EPA announced two per- and polyfluoroalkyl substances (PFAS) chemicals as hazardous substances. As hazardous waste disposal restrictions mount, PFAS in artificial turf will make it more expensive to dispose of when the carpets wear out.

On Sept. 14, the EPA announced that artificial turf fields in the Mystic, Charles and Neponset River watersheds will need to file for stormwater pollution permits. Science research shows they release one to five tons of toxic microplastics into stormwater systems and rivers per field per year. Stormwater from Roosevelt Park drains into a culverted branch of the Malden River, which is part of the Mystic River watershed. Aging toxic turf fields already installed in the neighborhood require regular replacement of thousands of pounds of crumb rubber infill to be playable. By design, this manufactured toxic waste washes into stormwater and pollutes the surrounding rivers and salt marsh ecosystems.

Malden residents are hopeful that international attention toward regional rejections of artificial turf will help local civic leaders grasp the gravity of their concerns and encourage them to rethink and forego such a big environmentally degrading mistake. Retired Salemwood science teacher Kathy Sullivan noted, “I read that artificial turf fields in sports have become a status symbol, but now that the NFL and other sports players are pushing back on the safety concerns, grass will be the status symbol in 10 years. Where does that leave all of the communities who built artificial turf fields? How will they pay to get rid of the old turf and replace it with grass again? Malden needs to be more forward thinking for the sports players safety, climate action, environmental safety and costs associated with installing artificial turf and the cost to remove and replace it every 8-10 years. Public opinion and sports players opinions are swaying away from artificial turf as more and more climate and environmental science and safety concerns arise daily in the news.”