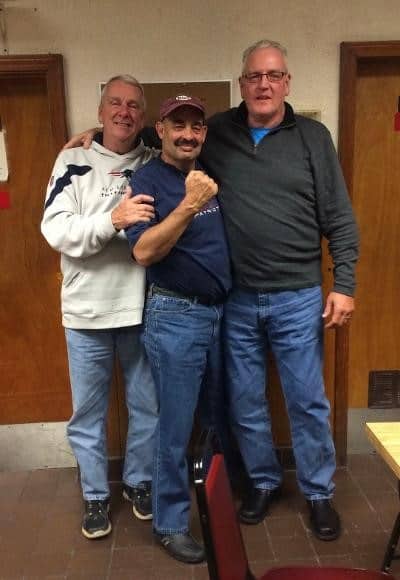 Just like that, Pine Street’s Cliff Cioffi turns the big 7-0. His days and nights of dominating the Amerige hoop court, a distant (but still vivid) memory (just ask him). His days debating cultural, social and political issues at the A.O.H. on Charles Street are, at best (thankfully for fellow members), limited. His days of being the center of attention, although not technically over, lessened dramatically over the years (new knees, repaired shoulders, domestic bliss). But make no mistake, “Choff” is far from done with his present-day mortal coil. He’s Cliff Cioffi. He’s 70 years old, and if he had his druthers, he would torture us for another 70 years!

He burst into our lives in the summer of ’71 just as Rod Stewart’s “Maggie May” began climbing the charts. Hasn’t been a day since that fateful moment that something Choff pontificated on doesn’t enter our consciousness (haunt us?). His core belief system unchanged through the years – proudly wearing his liberal freak flag even when it was a clear and present danger to do so – his musical taste, always two steps ahead of any trend. His instinctual ability to bring people together and get the party started? Unmatched in the history of Amerige and Devir Park. Cliff is special in so many ways. Those that know him understand what I speak of. At times obstinate (like his siblings) – at times overopinionated – on occasion, a tad overbearing. But he wouldn’t be “Choff” if he weren’t. Again, those who know him love him unconditionally. Role model, mentor, Rabbi, friend; all the above and more. Choff lives life his way. Never a dull moment in his entire glorious life. Happy birthday, “Mr. Big Stuff!”

Representative Paul Donato is straight out of Medford, but he is one of Malden’s best friends. He knows the people. The landscape. And where all the best restaurants are! Paul would like to continue to serve Malden. Let’s get to know Paul the person, just a bit. Twenty questions for one of the hardest working men in show biz…

As Peter Falk’s iconic TV character “Columbo” would say “Just one more thing, sir.” This past May counted the 23rd year of Steve Powell’s passing. Here I combine the old with the new to revisit his short but sweet life: I miss my dear friend, the original renaissance man himself, the late Steve Powell. Very, very hard to believe we have been without him for all these years. He would have just loved today’s technology, today’s music, today’s Malden, today’s weed! Steve passed away unexpectedly on May 22, 1999 – leaving behind too many people who loved him to count.

Eccentric, unconventional, gifted with a killer smile – he certainly was all those things plus one of the purest athletes Malden ever produced to boot. His induction into the MHS Sports Hall of Fame was a no-brainer. He was just so good. Steve had an inexhaustible joie de vivre – talented with a terrific sense of humor and a remarkable appreciation for the healing powers derived from the simple pleasures of life.

His travels around the world are stuff of legend. I discovered a postcard he had sent me in 1991 while he was “vacationing” in Malaysia. He tells me that he is in this “awesome rainforest,” one of the last in the world, that he trekked three hours into the forest and was so tired he “almost croaked” due to the humidity. He was looking forward to getting back to the camp because they “stocked cold beer” – but he was going to hold off on a birthday adventure up some mountain because he was “way outta shape.” I doubt that you were ever out of shape, Steve.

Here is my favorite Steve Powell story: I ran into the multi-sport star athlete, world-class adventurer and music lover late night in December of 1994 at the infamous Rat in Kenmore Square. We were both there to see the Jam cover band “All Mod Cons.” After the show we went to Steve’s apartment in the North End for a “night cap.” He introduced me to his cat “Bella” and explained how he inherited the cat with the apartment. The landlord insisted that if he wanted the place, he had to take the 20-plus pound feline that the previous owner left behind when she passed on. No problem. Classic Steve Powell!

Steve’s sister Katie was kind enough to reminisce about her beloved big brother: “Steve loved life, a bit too much. He loved people and did everything he could to listen and learn about them from all around the world and people of all walks of life. He never judged anyone and based his opinions only by his own experiences.

“Europe and Asia were his favorite places to visit. He traveled by backpack, moped, and hitchhiked. He loved small villages and learning about the natives and their way of life, eating their exotic foods, and experimenting with homemade drink.

“I don’t think there has been – or will be – anyone like Steve. He fought for the underdog and didn’t mind telling you what he thought about you if he believed you were a bully. Steve was smart, school was too easy. He was in major works and honor classes. He would engage people in philosophical discussions and had the ability to persuade anyone to his side. He took risks…he wasn’t afraid to try new things…unfortunately, that wasn’t always the smart thing to do.

“A couple of stories…. he was backpacking through some small village somewhere in Europe or Asia with his friend, Mike. They were dirty and hadn’t bathed for quite some time. They came across a small, poor excuse for a car wash. Steve went through it totally naked. When he came out the other side, there were a bunch of village women and men astonished. Needless to say, he was invited for dinner and stayed with one of the families for a short period.

“Steve was rebel, and impertinent (at times) …during his high school years, a coach told him not to step foot on the Macdonald Stadium turf (probably Mr. Duffy), so Steve did a handstand and walked to the other side of the field, on his hands!”

“Steve literally had a million stories. Sad that he cannot share them with us. His relentless pursuit of that next adventure, that next high caught up with him in 1999. His friends, his family, and the community at large are poorer for that.”

Postscript 1: From 1979’s “London Calling,” an album that mirrored Steve’s life philosophy; a line from “Clampdown” offered up by one of his muses, Joe Strummer: “You don’t owe nothing, so boy get running / It’s the best years of your life they want to steal.”

Postscript 2: You gifted Black Flags’ “Damaged” to me back in ’92, Steve. It’s displayed in my hallway. I think of you every time I walk by it.

Postscript 3: Steve played on one of Choff’s star-studded hoop teams in the Melrose League many years ago. Choff stacked his squad with ringers like he did every year. Steve fit in nicely as they dominated the league including big wins over archrival Melrose’s (in)famous Barrett and Johnson brothers.