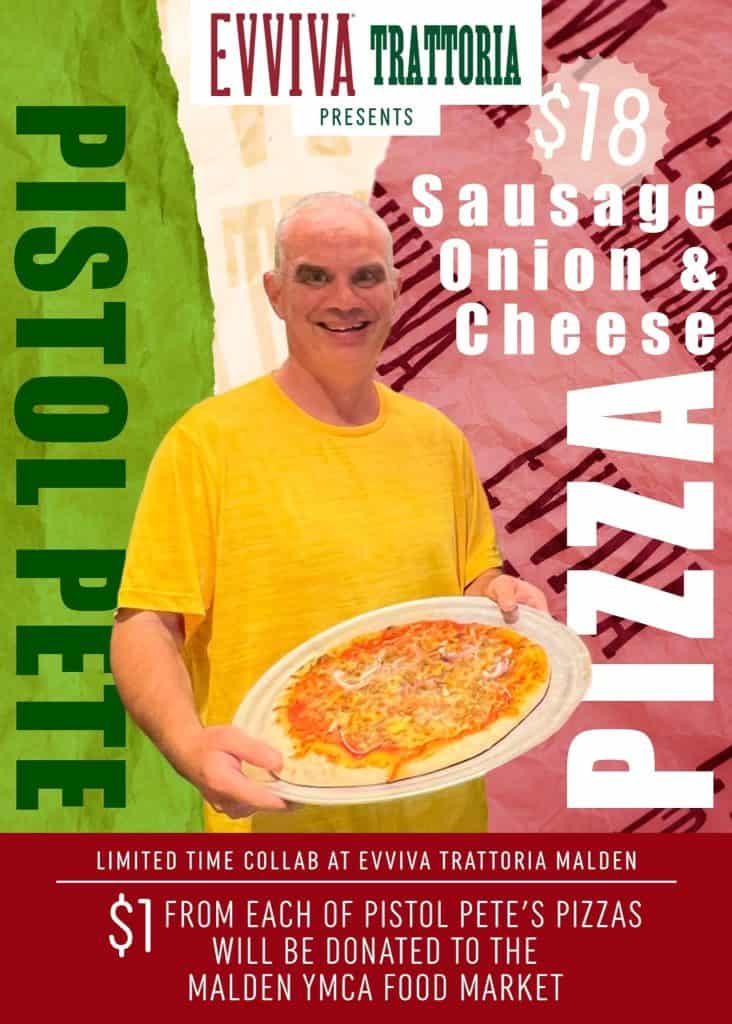 By now you’ve probably already had a “Pistol Pete Sausage, Onion, and Cheese Pizza” at Evviva Trattoria. Or at least heard the chatter that it made its debut in August. “All About Malden’s” Peter Caso was the inspiration behind Chef Anthony and Director of Operations Marcie’s impetus to create a pie worthy enough for Watts Street’s favorite son. Pete is very proud of himself and the staff at Evviva and was excited to hear that a poster advertising the special pie will adorn a window at the trattoria. Take it away, Pistol: “Came home from work today and the official poster for my Pistol Pete pizza was communicated to me soon to be put on the window for display at Evviva. I am so proud of myself and my accomplishments in Malden and I want to give a big thank you to Evviva and their fabulous staff for this. What does everyone think of this. Hope everyone enjoys my delicious pizza! Congratulations to me and Evviva.”

Malden Recreation Director & stone-cold Edgeworth resident Joe Levine turned 67 last week. The kids at the Stadium serenaded him with a surprise “Happy Birthday.” When it comes to Joe Levine, 67 is the new 47. Just sayin’!

Many people who came of age in Malden during the 1960’s idolized pop icons The Monkees, I included. We bought our Monkees (vinyl) records (Kids, ask your parents what vinyl records are) at Jordan Marsh, Caldor, Zayre or J. M. Fields. We bought our fanzines at Beers Drug Store, Moe’s Smoke Shop, or “Frenchie’s” on Charles Street. And if we were fortunate enough, got to see them live and in person maybe at the old Boston Garden. Malden High School 1984 graduate Dave Alexander toured with the Monkees for close to 25 years during their 1980’s comeback years. David passed away recently after a courageous battle with cancer, his sense of humor fully intact to the very end. His big brother John related that when asked who he’d like to meet on the other side, Dave did not hesitate: “the Three Stooges, of course.” His dear friend, Micky Dolenz, the last original member of the Monkees, had this to say: “A sad, sad, day. RIP my beautiful friend and bandmate, Dave Alexander. We shared so many years of music and laughs together. For twenty-five years in the various Monkee/Micky configurations you were the consummate musician and vocalist. We will miss you terribly, ‘Loafie.’ Wherever you are, you will rock ’em.”

Some dream of silver & gold (Hey, there’s a Hank Williams Sr. song there), lottery riches or vacations on the Isle of Capri. On this mid-September evening, with a hint of fall in the air – as I sit watching Angie Dickinson’s 1970’s groundbreaking “Police Woman” TV show (the “Silky Chamberlain” episode with a very young Cheryl Ladd) – I dream of Richie Cremone’s chicken soup (not Cheryl!). The soup that made Chef Richie famous and me very happy. Missing you both, Richie! Insert smiley face.

Former Malden Police Officer Mike Hardiman via Facebook on his Woodstock experience: “Now that we’re coming up on the anniversary of one of the best times of my life. I was home on leave from the Navy and l called up a friend of mine from Medford, that l met while driving cab for Malden Taxi. Asking him what he was up to, he told me he was leaving with a few friends for Bethel, New York, to go to Woodstock. He gave me three hours to get ready, and he picked me up, I always loved doing things on the spur of the moment. I got separated from my buddy and his friends and I had to hitchhike back to Newport, Rhode Island. I got picked up by four girls from Quincy, spent the night in Quincy, and two of them took me back to my ship the next morning in time for roll call, or muster at 6:30 am. I’d love to repeat that experience at the age I was at then.”

A bit of a scoop provided by none other than cub reporter Steve “Jimmy Olsen” Winslow…seems that at the recent Greater Boston Labor Council Annual Labor Day Breakfast Vice President Kamala Harris gave a shout-out to Malden as she spoke about the Federal Infrastructure funds that will be provided to remove lead water pipes. Thanks for the scoop, Steve!

As Peter Falk’s iconic TV character “Columbo” would say “Just one more thing, sir” – when Marty Gately speaks, I listen: “How do you know when something is a big deal in Malden? When both Peter Caso, the man behind the Facebook ‘All About Malden’ page, and Chris Vetree, a walking encyclopedia of Malden, are in the same house. The Irish American Labor Day race brought Peter, Chris, and hundreds of others down to the little Irish club on West St.

“The race is my favorite Malden tradition! I love getting to see so many of my old friends like Jim Galante, who I used to run the race with when it was a half marathon and Jim’s uncle, MC and Edgeworth legend, Matt Connolly, was running the show. Matt’s son, Joe, and his wife Diane are still involved volunteering as are Mike McCarthy and Brian Killion, a better group of people, you are not going to find! The race has raised tens of thousands of dollars to fight cancer!

“Peter Levine predicted that I would finish in the top of my age group. I told him that I would not finish in the top of my age group but I, correctly, predicted that I would win my weight class. (Insert smiley face) I am happy to report that I blew off the humidity and finished 1:40 faster than last year. As a veteran of the race, I know a few things: (1) after you make the turn from the Fells to Highland Ave, it is all downhill or flat; (2) you need to choose your cup wisely at the final water stop located in front of the Hibernians on Charles Street (wink, wink) and (3) when you see the Irish flag in front of Neal Carroll’s house on West Street, you are almost there. BTW my grandfather was the President of the AOH back in the days before I was born, a fact that did not impress my grandmother who always referred to the AOH as ‘All Over Hell’ whenever we drove by. Still makes me laugh.

“A ton of Malden people were there including Mayor Gary Christenson, a guy in his fifties who finished the race in 20 something (impressive), and then was immediately on his phone making sure that the city was prepared for the coming storm. The guy never stops! Paul Donato was there, on the day before his primary win, doing some last-minute campaigning as was Edgeworth’s stellar rep on the School Committee, whip-smart Rob McCarthy.

“The best part of the race is seeing old friends, none who I have known longer than I.A. Road Race Volunteer Karen Bushee who, along with my cousin, Denise (Craven) Leonard [I] met for the first time on a September day in 1963 when we all arrived together at the Malden Hospital Maternity Ward. Karen’s daughter, DOCTOR Fallon Bushee, took a break from saving lives to come in second place in the women’s race followed by her twin sister, Shannon. Shannon is a successful financial writer. I don’t know what that is but my friend Paul Weston, who also posted a better than he expected time, and is also a finance guy/real estate broker, seemed to be impressed with what she was saying.

“The post-race party had a decidedly old country feel as everyone was hanging out inside because it was pouring outside. Looking forward to next year!”

Postscript 1: Congrats to you indeed, Pete Caso. I’ve had the pleasure of knowing you since you and your hooligan friends were young pups running wild on the streets of Edgeworth. You’ve come a long way, baby! My “Pistol Pete Sausage, Onion, and Cheese Pizza” was worthy of its namesake. Forgetaboutit and congrats again!

Postscript 2: If you do not know Chris Vetree, you should. You’ve probably seen him around town but didn’t know his name. Next time you see him, say hello. Chris is a very interesting person and a sweetheart of a guy.