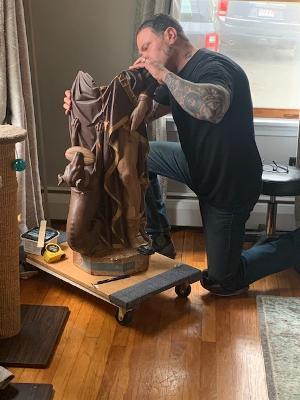 Nicholas Menkello is Nicky Angelo’s godson. You may not know Nicholas Menkello but you know Nicky Angelo! This beloved “Son of Edgeworth” singlehandedly kept the Saint Rocco Feast alive through the good and lean years, his status in his Edgeworth neighborhood a cross between Paul McCartney, JFK and Matt Dillon. Not only for the exemplary life he’s lived, not only for that handsome, ageless babyface (we often speak of Nicky’s still incredible head of hair), not only for marrying well, but most of all for his two beautiful daughters, Paula and Ann-Marie!! I remember my first-ever Nicky Angelo experience. It was at Saint Rocco 1978. I was nursing a Miller High Life in “Albert’s Beer Garden” with my (late) BFF Jimmy Damiano when the “Prince of Pearl Street” comes strolling in. (Is it just me? This guy even walks cool!) Showing cult-like reverence, the crowd splits like the Red Sea as if Nicky were the Rolling Stones’ Brian Jones parting the crowd at the Monterey Pop Festival in 1967! I asked Jimmy who the (heck) that was. He sideways glanced me with a smirk and says, “I forgot, you grew up on the other side of Highland Ave.; you probably don’t know Nicky Angelo.” But I digress…

This little story is about Nick’s godson Nicky (Menkello). Handsome like the godfather (oops, I meant hisgodfather), Nicky and I became fast friends this San Rocco over our love of the weekend and the reason we gather on Pearl on the second weekend of the year. Every year. Nick is chiseled like a WWE wrestler and has a “don’t mess with me”–type look about him, but as the saying goes, “Don’t judge a book by its cover.” Soft-spoken with a way about him that belies his appearance, Nicky pulled double duty this past San Rock weekend first by volunteering behind the grill then walking the Procession on Sunday afternoon. This earned him my annual “San Rock 10th Player Award” for the three-day fest. I digress, once again.

Nicky told me a great story about a recent purchase of his. Well, take it away Nicky: “Anyone who grew up in the Edgeworth section of Malden knows that around the beginning of August there is a heightened sense of community among the Saint Rocco faithful. For the past several years I’ve been searching for a statue like the one we all know and love that stood at the corner of Saint Peter’s Parish, and now, at the IACC (the original still displayed in Vinnie Della Gatta’s bay window on Pearl). I was able to finally find the exact same one carved by the Daprato Brothers (1884 vintage Italy)! It went on auction, and I placed a bid along with my Edgeworth story, and what it meant to not only my family (godfather Nick) but to an event that brought us ALL together. I won the auction instantly and his long journey began to Boston. Unfortunately, upon arrival the Saint was destroyed, in pieces. I was devastated to see it in ruins. But much like my Italian ancestors would have done, I summoned the skills needed to take every shattered piece and slowly restore him. It took about a month and many hours but it’s back to a proper condition, with minor imperfections. It was a painstaking honor to rebuild alongside the amazing skill of the Diprato’s [sic] nearly 150 years ago. He will grace my dining room on a platform I built from hand and will be in our family and our hearts forever. Viva San Rocco.” Brilliant Nicky, thanks for sharing.

As Peter Falk’s iconic TV character “Columbo” would say, “Just one more thing sir” – with the blink of an eye the latest chapter in the long history of the Saint Rocco Feast is over. Hard to believe for me that it was my (now) 55th year on the black hardtop of Pearl Street. On that long-ago Monday night in 1967, big brother Joe took me to the Saint Rocco firework display at Devir Park. I have been a Saint Rocco devotee ever since. Growing up the Feast was considered the high point of the summer where we (unfortunately) knew the school year was rapidly creeping, and summer was on its way out. But before it was, we would have one last blowout. I think for me and a lot of folks who grew up in the neighborhood it’s the continuity of the event that we take to heart: the way you can set your inner clock to the Feast, that second weekend in August, every year. That “organic connection to the heart and mind” that those of us who grew up in Edgeworth and Ward 2 all feel. Viva Saint Rocco, “Salute” (health) and “Chin don” (100 years)!

Postscript 1: Johnny “All Tech” Spadafora demonstrating to his daughter Jessica the proper way to pin money on the Saint, explaining how to guide the Saint through the streets of Edgeworth while avoiding the ubiquitous pothole and elevated manhole covers, but most importantly, lovingly passing down the history of the old neighborhood for the next generation of Spadaforas. Important lessons handed down, father to daughter.

Postscript 2: Dom (Fermano) made the “Stock 82” toast at about 6:25 on Friday night. We saluted Richie Cremone, Tony Pisaturo and all that came prior to us. The Saint was then escorted down to “Little Pearl” to start the weekend. Just as Richie and Tony Pez would have wanted it.