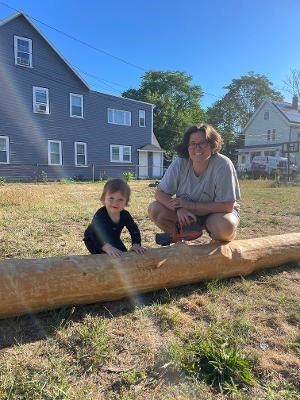 MHS Hall of Fame athlete Jenelle DeVits and her adorable daughter, Penelope, took a break while preparing the grease pole.

When Penelope’s mom and San Rocco Grease Pole co-organizer Jenelle DeVits speaks, I listen: “As an Edgeworth kid, I remember walking down to Pearl St. as fast as I could to get a good spot for the grease pole every year. Even as teenager, my friends and I would pull up to the fence early, and then start cheering the climbers on like it was the playoffs, game 7. It was a yearly ritual for as long as I can remember. I’ve watched some amazing Maldonians come together as a team to get the salami and cheese atop the grease pole. The last few years, I’ve witnessed the hard work and dedication of some long-time Edgeworth guys bring this tradition back – Andy Rigano, Nick Gizzi, Joey and Jay Hurley, Tim Kelly, etc. A few years ago, I was honored to join them on the team, when, for the first time, the Edgeworth ladies stepped up to help get them to the top. We watched Gina Spadafora Hurley, Anna Rigano, and others come out of the crowd. We witnessed top tier specialist Rebecca Krigman prove that climbing the grease pole is an equal opportunity risk!

“Last year was extremely special, as the climb to honor Chris Rigano brought our neighborhood together like never before. This year, I was glad to help bring the grease pole back and work with Rebecca, Nick, and Andy to get it up and recruit climbers. I even got Andy to pull a ‘Tom Brady’ and come out of his so-called retirement to climb. This year, we climbed to beat cancer. We climbed for Tim Kelly. As our team assembled though, we realized we were short a few bodies, so we started recruiting from the crowd. It was great. We watched several Maldonians step up and join the team. Eventually, we even had Billy Spadafora out there!

“The best part, though… after an hour or so of watching us struggle to get that fourth tier, Marina Rigano Cox and Gina Spadafora Hurley changed, taped up, and gave us the last boost we needed to get to the bag. It was something else watching Gina’s son Joey climb on top of her shoulders to grab it – talk about an Edgeworth family!

“A lot of people do not appreciate the hard work and time commitment it takes to make the grease pole happen every year, so I want to thank my wife, fellow Maldonian Kimberly Gillette, for holding down the fort at home so I could help make this happen. My 14-month-old daughter, a fourth generation Edgeworth kid, experienced her first St. Rocco’s Feast this year. She loved the music, the people, and the dancing, but I hope one day she is covered in grease helping her friends get to the top. Viva San Rocco!”

“Good evening, Mr. and Mrs. Maldonian from border to border, coast to coast, and all ships at sea. Let’s go to press…”

As Peter Falk’s iconic TV character “Columbo” would say “Just one more thing, sir” – pausing at hallowed Malden ground (Russell and Whitman) at Private First Class Kevin Robert “KC” Crowe’s memorial stone during the Sunday afternoon Procession; always an emotional experience for those of us who escort the Saint. This “Son of Edgeworth” grew up across the street from the memorial and took great pleasure in the Saint Rocco tradition. Kevin lost his life in battle on June 5, 1969, during the Vietnam conflict. His family still resides in the neighborhood, lovingly maintaining the memorial erected for him. It is very important to continue to remember one of our own – PFC Kevin “KC” Crowe. Never to be forgotten as long as there is a Malden; KC always in our thoughts. 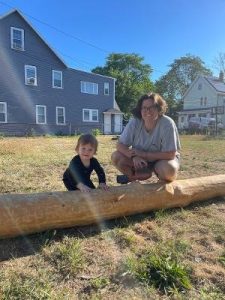