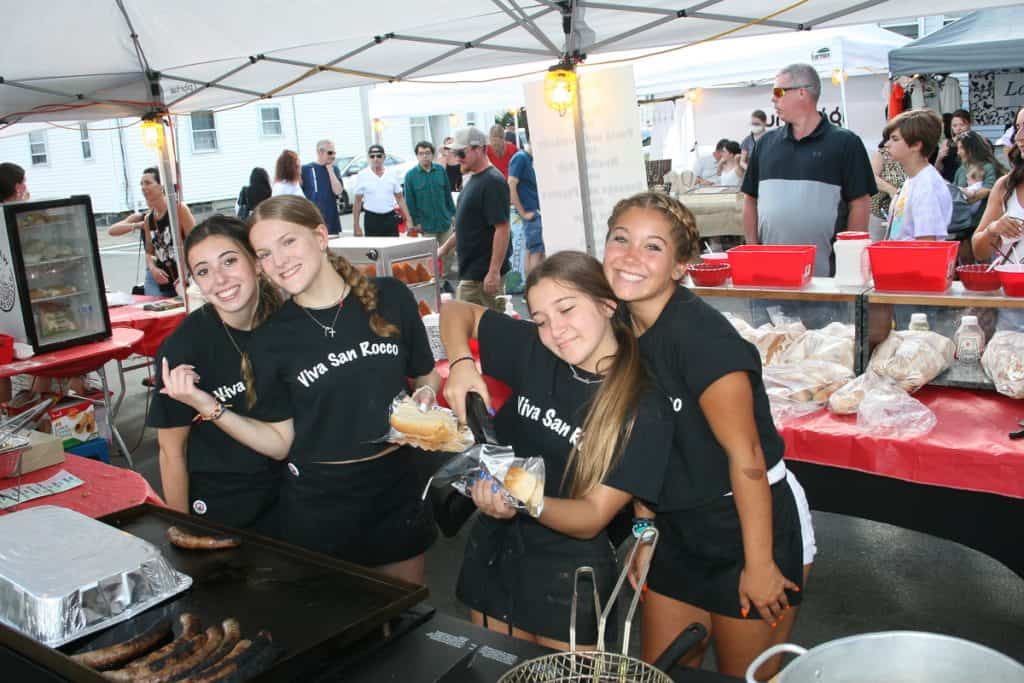 As Peter Falk’s iconic TV character “Columbo” would say “Just one more thing, sir” – I wrote the following words shortly after the Feast wrapped up, before the news hit that Alice had passed on. Strong. Dignified. Principled. Beautiful. Alice was all this, and more:

“On Sunday during the annual San Rock Fest we stopped in front of Alice Spadafora’s home. It’s part of the tradition. The First Lady of Edgeworth, Alice Spadafora, was not on her front porch last year when the Procession passed by. We were overjoyed that Lady Alice greeted us this year as the Saint rolled up into her driveway. We all jockeyed for position to say hello and get in that special ‘Kodak Moment.’ Alice and her family are part of the rich history of Malden and especially Edgeworth. It felt really good that we got to see her, and that she got to see us.”

Postscript 1: On Thursday morning, August 25, Gina Spadafora-Hurley broke the news first: Her beloved “Nana” had passed away the night before. It could not have been easy. She posted a beautiful tribute on Facebook which immediately drew hundreds of responses: “During the night we lost our amazing Nana, Alice Spadafora. She would have been 96 in just 8 days. Nana was still living on her own, cooking her homemade meals and still calling us to come pick up her homemade sauce and pizza. We surely will miss all those yummy meals made with nothing but pure love and homemade ingredients. We will never forget our summers down at the Cape house, our Saturday mandatory lunches at the ‘bar,’ and her fried dough. Oh yeah, and how she snuck us scratchies under the table. We will miss all her hand outs of chocolate kisses even if she stuffed them in our kids’ pockets and they ended up in the wash machine. She poured her heart and soul making Anthony’s of Malden the place it is today. Nana Alice raised millions of dollars over the year to donate to St. Jude. She was truly passionate about helping everyone but especially children. I know she is up in heaven playing unlimited slot machines and cursing that she didn’t spend her free play of $300 at Encore. We know she will continue to watch every single Red Sox game and yell at anyone who gets in her way. She lived an incredible life with tons of people who truly loved her. We will certainly miss her.”

Postscript 2: The Sunday afternoon Procession of the Saint through the streets of Edgeworth is always a highlight of the weekend. The Saint starts/stops and accepts donations from pilgrims lining the streets (Thank you, Basil Rigano) or residents standing in front of their homes (Thank you, Mike and Susan Jotki), then proceeds forward. Sadly, the Procession, which at one time escorted down many, many streets, is down to a scant few these days. But the ones remaining make it all worthwhile.

Postscript 3: Flashback! A special stop in 2020 was in front of Alice Spadafora’s home on Emerald Street. Alice and the whole Spadafora family provide refreshments and sandwiches (The turkey slider was extra yummy!) for those accompanying the Saint and for the marching band. Alice was awarded a St. Rocco tribute (a miniature San Rock statue) by the committee for her generosity and commitment to the Feast and to the neighborhood throughout her life. Looked like her whole family was gathered in the yard. Those who doubt the future of the Feast, rest assured there are still enough Spadaforas in the neighborhood (and in Malden) to guarantee this Feast survives at least another 92 years.

Postscript 4: Councillor-at-Large Craig Spadafora; husband, father and loving grandson on his grandmother Alice’s recent birthday: “When I think of my grandmother almost reaching her 96th birthday I feel eternally grateful for the simple priority she gave to us as children; being grounded in love of family and friends. Instilled in us at a very early age. She embodies what it means to advance in years gracefully. She remains bright, inquisitive, concerned about others and open to friendship. She is for us, the rock, for which we lean so heavily on through the good and bad in life. For this, we love you beyond words. Many more years of sunshine and happiness Nana.”

Postscript 5: Alice sat on her porch this year (2022) and was greeted reverentially by old and new friends alike. Our fear: that this might be our last opportunity to be in her presence. Rest peacefully, dear lady. To her family, an old Jewish prayer: “As long as we live, they too will live; for they are now a part of us; as we remember them.” More on Alice in two weeks.