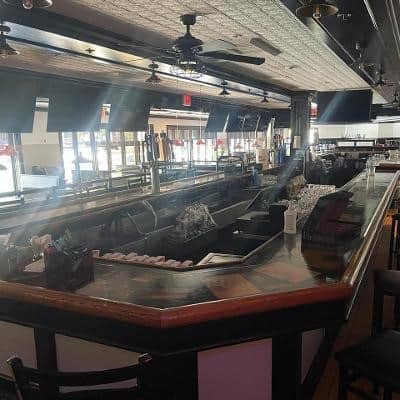 “‘Barnett didn’t need to build a winning tradition. Aspinwall used a pipeline to the Northeast, including numerous players from the small Massachusetts town of Malden, to compile a 252-158 record (.615). The Saints produced NAIA All-Americans Rob Santo, Jeb Backus and Paul Abbatinozzi and won one NAIA district title and reached the championship game in two others between 1979-1987. Malden products Santo, Abbatinozzi, John Montecalvo, Dean Bowrosen and Artie Eld were the backbone of nine consecutive winning seasons.’”

As Peter Falk’s iconic TV character “Columbo” would say, “Just one more thing, sir” – former Ward 6 Councillor, longtime Maldonian and social media sensation Neil Kinnon was on the road again. Take it away, Neil: “Drove from Malden to Fargo N.D. over the weekend with (son) Ryan (U hauled it). His job has been there since graduating college, yet he up until now has lived home and worked remote due to Covid. No longer, he now will work from the office or the road living in Fargo.

“Never been to Wisconsin, Minnesota or North Dakota and was surprised at how beautiful Wisconsin and MN were as we drove through. We live in an enormous and great diverse country.

“Stopped in Saint Paul, MN and visited the Cathedral of Saint Paul, the third largest I’m told in U.S. behind the National Cathedral in D.C. and Saint Patrick’s in N.Y.C. It was stunning inside. The Capitol down the Street also quite nice.

“Finally arrived in Fargo Sunday night. The area is booming. Thirteen percent population increase in last decade. New housing going up everywhere. New schools and even new Catholic Churches and schools built. The downtown is a throwback in time and seems to be thriving.

“Learned Fargo was home to Roger Maris, still the true single season home run record holder and also the place Bob Dylan bussed tables and hung out from 1959 until around the time he made it big. Was surprised by Fargo not what I expected and quite nice. Looking forward to another trip back. Good luck to Ryan on his new adventure. Lisa and I are now empty nesters, first time in thirty years. Sure went by fast.”

Wonderful, Neil! Enjoy your newfound freedom. All the best in the future.

Postscript 1: Happy belated (89th) birthday to longtime Maldonian Harry Lockhart. Harry’s daughter Karyn and I were schoolmates, graduating M.H.S. together in 1975. Karyn’s mom, Betty, passed away a year ago; the family is still reeling. Muriel Elizabeth LeCain Lockhart was born in Medford on November 8, 1933, but lived in Malden all her life, graduating from Malden High in 1951 with her husband, Harry. Engaged in 1953, they tied the knot on July 29, 1956. They had three children: Karyn, her brother Kenny from the class of ’77, and their sister Elaine (class of ’87). Harry and Betty were both lifelong Maldonians, living on Hawthorne Street until Betty passed on September 30, 2021. Harry, my sincerest condolences on the loss of your beloved wife. Thank you for reading this column. Stay well, my friend. P.S. Karyn, let’s start planning the 90th right now!

Postscript 2: My mother, Dorothy Drago Levine, left us in 2015. But never actually left us. That hole which appeared in our lives shortly after? You could fly Air Force One through it. Fortunately, she is the fabric of our existence, so she is really never too far away. With that said, “my mom made the best…”

Postscript 3: Speaking of my mom’s chicken soup…that is what we dined on during the “Northeast Blackout of 1965” – by candlelight with Joe’s schoolmate Vinnie Disano staying for dinner.