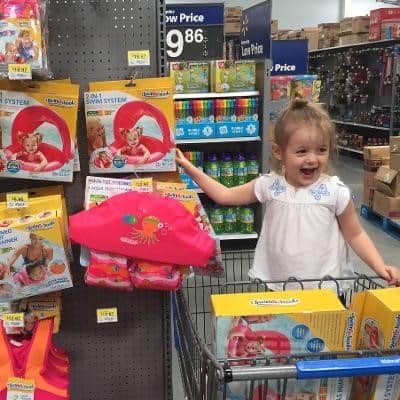 Time is sneaky. When you least expect it, you get bushwhacked and like bam! Lola Nicole Falzarano turns nine! The little girl with a smile that has lit up stages, the little girl with a zest for life that is downright contagious, and a personality of a superstar in the making. My sweet, adorable little tow-headed granddaughter is one step closer to growing up, one step closer to shedding the last vestiges of that little girl who, as a three- and four-year-old, would dance like it’s nobody’s business whenever I put needle to vinyl (she was particularly fond of Bob Marley at that point in her life). Lola has brought much joy into my life. The happiness she has given me? Forgetaboutit! I cannot conceive of life without a Lola Nicole Falzarano in it. I am looking forward to the next place this wonderful world takes us together, Lola. “Time may fly over us (dear Lola) but it is definitely leaving its shadow behind.”—Nathaniel Hawthorne (paraphrased).

As some may have noticed, I no longer write for the Malden Observer. “Malden Musings” was unceremoniously put out to pasture in mid-June. The sad news came via email by a very nice person named Katie. She expressed her regret at having to be the bearer of bad news. She also mentioned how they were going through a transition at WickedLocal.com – making changes to the stories they are putting in the paper and on their website. As part of the change, they would no longer be going forward with opinion content. The death knell of print media continues I thought to myself. Such is life.

September 2022 would have marked 15 years of “Malden Musings.” The column began with gentlemen like Bill Mini, Don Squires and John O’Brien in mind. I was a fanboy of those three local print media icons when they were writing for the various papers way back when. I loved and respected their knowledge, wisdom and passion. I felt that local points of interest, for those who grew up in Malden or who have recently made Malden their home, weren’t being served. I thought that the local coverage was (less than) adequate at best. I wanted to continue in the tradition of Mr. Mini and Mr. O’Brien to inform as well as entertain those in Malden who love the city as much as I do. And as much as they did.

I acquired my love for print media from my late father, Jerry Levine. He was an avid newspaper reader, from the respected (Boston Globe, NY Times), to gossipy tabloids (NY Post), to the center/right (Boston Herald). A self-taught man, he would also devour magazines, such as Newsweek, Life, Playboy (for the articles of course) and Time. He consumed it all and sorted the truth out all by himself – what most people did prior to the 24-hour news/opinion brainwashing cycle beginning. I got the bug first by reading the sports page, eventually progressing to the op-ed pages. His education, as well as mine, was greatly enhanced by our love of print media.

I have no formal training besides writing a “newsletter” back in the 8th grade at Beebe Jr. High School called “The 8-7 Times,” the “8” standing for the 8th grade and the “7” standing for those students who were not trying very hard in their scholastic pursuits. The newsletter consisted of 8th grade gossip with some afterschool extracurricular shenanigans thrown in. I would write it up, xerox a bunch of copies, then hand them out to classmates. One day a copy landed on the desk of my 8th grade English teacher, Mrs. Bothwell, whereas she politely asked me to stick around after class, to “talk to me.” That dear lady told me how much she enjoyed reading my xeroxed offering. She also said that if I applied myself, I had some “real potential” in journalism. I was flattered. I tucked that conversation into my memory bank, never forgot it and continued my scholastic downward spiral.

I have good naturedly been called a hack by many of my friends (I think it has been good naturedly), but I hope that my passion for Malden and the love I have for the many friends that I have made over the years translates into these columns. I started “Malden Musings” in 2007. Marty Gately was the very first person to compliment the column. His urging to write more of them was the impetus for me to continue. Thank you for that, Marty, I have really appreciated your feedback over the years. Then editor Nathan Lamb liked my column. I was very flattered at the time. It meant a great deal to me. I said to myself, “If Marty and Nathan like it, I must be doing something right!” Insert smiley face.

I’d also like to convey my heartfelt appreciation to all the wonderful people who I’ve interacted with at the Observer, from editors I knew as flesh and blood human beings, like Nathan (Lamb), to Wendall (Waters), to Amanda (Mantone-Linehan), to Jane (Enos), to the many more who were just an E-message that popped into my Inbox from time to time. Thank you.

Again, I want to publicly thank the many others who have told me over the years they enjoyed the column. I am truly humbled by your kind words. I sincerely appreciate it. There have been a few missteps along the way, but I’ve learned from each one. I hope my columns haven’t offended anybody. That was never my intention for “Malden Musings.” If I have, please accept my apologies.

Once again, I realize that my columns continue to be “Edgeworthcentric,” that I may dwell on Ward 2 a bit much. They say home is where the heart is. So, bear with me, I’ll get to the rest of Malden…eventually.

As Peter Falk’s iconic TV character “Columbo” would say, “Just one more thing, sir” – for those Boston Globereaders out there, my version of “50 Words” – 1962 Galleria Umberto: “1962. The walk from Carney Court in Charlestown to Parmenter St. in the North End is a short one. Moms taking the three of us to Galleria Umberto for square slices of pizza before square slices had a name. Before Ralph, Paul and their mom opened up on Hanover Street.”

Living in Charlestown at the time as youngsters my mom would take her three boys into the North End to shop and eat. Our go-to place was Galleria Umberto – then located on Parmenter Street – for Sicilian slices before they were called Sicilian slices. Galleria moved to Hanover Street, I believe, in 1965. My mother, Dorothy Drago, was a second-generation Italian from the North End of Boston. My father Solomon, aka Jerry, a second-generation Jew from the West End of Boston. We originally lived on North Russell Street in the West End – bulldozed out and sent into exile by Rappaport and his gang around 1960 at the beginning of the West End diaspora. With all due respect, Carney Court in Charlestown (at the time) wasn’t very conducive to raising a family of three rambunctious boys. My father drove a truck for Agar Supply on Clinton Street in Boston (who remembers the big blue trucks with the pig on the side?). Karl Bressler opened the doors at Agar Supply in 1940. At the time, Agar barely had enough heavy trucks/vans to fulfill their obligations delivering meat and poultry to restaurants in Chinatown and suburban supermarkets. Mr. Bressler was old school – a smart businessman with a heart of gold. My parents were looking for a permanent (aka safe) place to raise their ever-expanding brood. Malden made an impression. It took a mitzvah from Mr. Bressler, but the Levines finally found a home. In 1963 we landed in Malden, which is where the Levine family resides to this day. And we still treat each visit with Ralphie, Paul and Galleria Umberto as a religious pilgrimage. Bless you, mom, for introducing us to that wonderful place.

Postscript 1: Fear not Malden, this column (MTTY) will continue and has found a wonderful home right here at the Malden Advocate. I am in it for the long haul if Jim will continue to accept my 1,500 words (more or less) each week.

Postscript 2: Condolences to the Freker family on the loss of their father, Jack. From all stories I have heard through the years and from reading his obituary in The Boston Globe, Mr. Freker led an amazing life. I know, for a fact, that he raised some great kids! May his memory be a blessing.