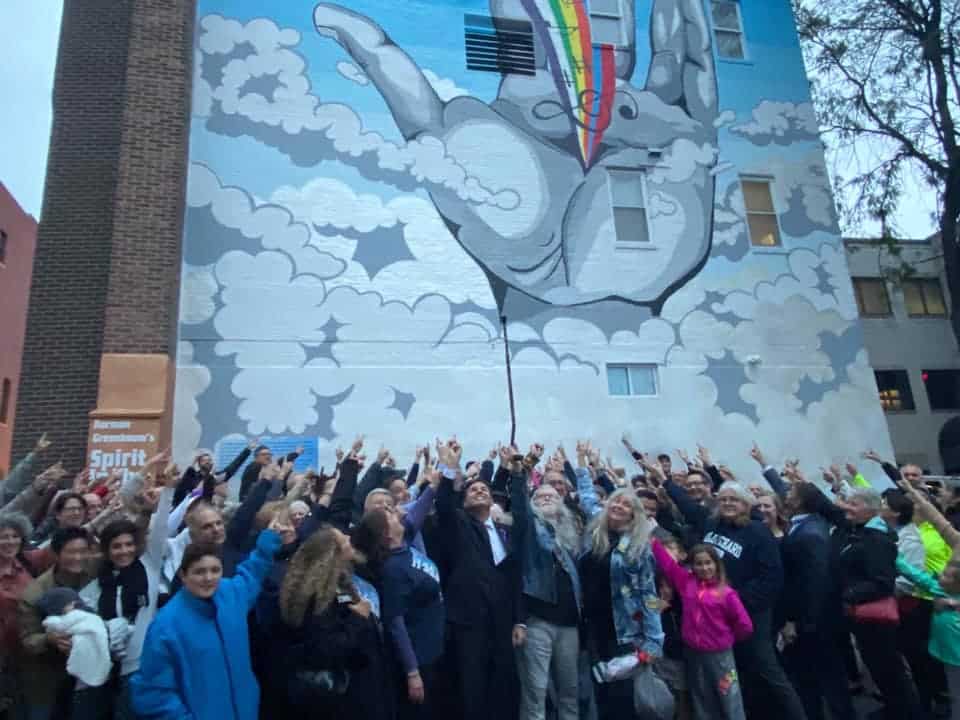 On April 29, at 6 p.m., the Malden High School Alumni Association will induct Norman Greenbaum into its Alumni Hall of Fame. There was a remarkable Norman moment back in 2019 between Malden and Mr. Greenbaum. This article attempts to capture the spirit of the day. I hope you agree.

“Welcome back, your dreams were your ticket out.

“Welcome back, to that same old place that you laughed about…”

Malden gathered and experienced a communal moment on Oct. 16, 2019. An event rarely seen in these dark days of political/social divisiveness. Ya had to be there. You really did. Music and art brought us together for a glorious moment in time and space. Music, art and Malden’s favorite son, our very own “One Hit Wonder” straight outta Suffolk Square (and his old haunt Faulkner Pharmacy or was it Shan-Lon?) – Malden High School Class of 1960 – Norman Greenbaum.

Sharon, Naomi and the rest of the volunteers at Malden Arts are transforming our once sleepy little hamlet just north of Boston into a happening art-filled community with colorful, thoughtful and quirky murals splashed across our five square miles. From Beach to Wicklow Street, Austin, Texas–based artist Jesse Melanson (and his assistant Megan Lacey) poured their heart, soul and a ton of paint on the backside of a tired old building on Exchange Street, transforming it into a beautiful destination spot for fans of music, art and the big boss man, Norman Greenbaum.

Such a great night in Malden Square. We gathered. We waited for Normie to show up. When he arrived (on time), he split the crowd in two and greeted each and every person as old friends. Reminded me of a lyric from the song “Monterey” by Eric Burdon – “His Majesty, Prince (replace Jones with Greenbaum) smiled as he moved among the crowd.” Norman looked regal, the elder statesman of a historic generation. His freak flag still flying – the long, flowing grey locks and beard to match – his cane the only sign of “father time” creeping up on him. And in fairness, Normie was in a horrific motor vehicle accident just four (seven now, of course) short years ago (2015). Not bad for a 77-year-old guy post-traumatic car accident. And with all due respect, his gal pal Bonita looked great also (and kept a close, watchful eye on our/her hero).

My brief time with Norman was unforgettable. Mostly what I took away was how genuine he was. No pretension whatsoever. He looked you in the eye, not over your shoulder, as a lot of celebs will do as they feign interest. He cared. Firm handshake. Connection made. Malden friendship. Thank you for that, Norman.

Mike Provitola reminded Norman that when he was at Lincoln Jr. High he had Mike’s dad (the legendary) “Mundo” as a gym teacher. Norman smiled.

Normie was approached by Police Chief Molis and, with a straight face, introduced himself then explained that he and the MPD had been sitting on a parking ticket that was issued to Norman when he was in high school. Still unpaid. Chief actually handed him a real ticket with his Lisbon Street address (42) on it (vehicle type: “Magic Bus”? or “Magic Carpet Ride”?). My note: Chief believes in authenticity when he is pranking. As Normie stood listening closely, chief continued, he needed the ticket to be paid. Stunned briefly, the look on Normie’s face was priceless. Then laughter all around. An immediate connection between Chief and Big G made.

You could see the sparkle in Mayor Gary Christenson’s eyes as he shook hands with Normie. They greeted each other as if they were old friends, small talk made easy when it’s sincere.

In multiple lifetimes you could not have imagined this night. Norman takes his place center stage, in front of the four-story tall mural, cane in hand with his fiancée and “pest controller” Bonnie to his right. Queue the song that brought us all together, the timeless classic, “Spirit in the Sky.” Who would have ever thought that we’d be standing on the corner of S. Washington and Exchange Street, Norman Greenbaum leading us in a group sing-along accompanying himself on “air cane” to the song we all cherish, the classic rock anthem “Spirit in the Sky.”

We knew all the words, of course. Cathy Leblanc, Dave and Ethel Haskell singing loud and proud. N.Y. Attorney John Tormey doing the “New York Attorney Shuffle.” Paul and Lisa Hammersley with mile-wide smiles. Councillor (Ryan) O’Malley and Councillor (Craig) Spadafora, in a kumbaya moment, shoulder to shoulder singing in two-part harmony – I made that one up – but both loving the special moment, nonetheless. Paul Sieswerda and his pops, who graduated with Normie, fist-pumping to the fuzz-toned guitar drenched classic. Joe Viglione capturing all the fun for his blog. The first couple of Malden, Maryanne Smith, and Donna Denoncourt shaking their moneymakers like it it’s nobody’s business.

The sing-along was pure unadulterated joy – Norman channeling his inner Jimi Hendrix making use of his cane – straight fire. He was all spirit and presence. Good vibrations among the two or three hundred who gathered. Norman finishes. Smiles. Raises his finger to the sky towards the mural. Does his trademark hand flutter type motion and flashes the peace sign. More smiles, all around. His happiness spirit felt.

“This is the end, beautiful friend, this is the end, my only friend, the end” – after the ribbon-cutting ceremony at the John and Christina Markey Senior Center, Mayor Gary’s sincere and heartfelt words for Norman had Big G emotionally (and visibly) shaken. Norman rose slowly from his chair and walked toward the staging area. That’s when Gary handed him a citation proclaiming our forever love for him. Norman’s words were humble – barely keeping it together – befitting his background and the blue-collar upbringing he had in Malden. In Suffolk Square. At MHS. In a choked voice, paraphrasing here: He was grateful for the opportunities his career and this particular song have bestowed upon a kid from Lisbon Street. He was grateful for the support he received early in his musical pilgrimage. Grateful for the people who believed in him. Believing in him enough to sign him to a record deal. Grateful for the opportunity for his music to be heard all over the world. Still paraphrasing: He had many highs in his life, and he was grateful for them but “this may have topped them all” was his closing statement. Mic drop moment.

Postscript 1: Mayor Christenson’s remarks were, as usual, clever and witty. Looking out into the faces of the hundreds of people showering their love on Norman, Gary says, “Well, let me just say how relieved I am that Norman Greenbaum is not on the ballot Nov. 5. Seriously, we hear the saying ‘All roads lead back to Malden’ bandied about over time but it’s people like Norman who actually make that so. Just imagine – his song sold over two million copies – and I think 200 views is a lot when I post something on Instagram. One can see why we are so proud to call him Malden’s own.”

Postscript 3: Mayor Christenson awarded Normie a wicked cool piece of paper. Loved the last line: “Again, we express our gratitude to Norman Greenbaum, and we are honored that a work of art inspired by his song is now displayed in ‘the place that’s the best’ – downtown Malden.”

Postscript 4: Mayor Christenson also awarded mural creator Jesse Melanson a wicked cool piece of paper. This line stuck out: “Jesse’s goal was to design the best work possible and encourage the world to think and live creatively. His art will inspire and foster civic pride for years to come.” Agreed, Gary.

Postscript 5: Chief Molis’ brother Joe, an amateur brewer, told me, if he had time, he would have brewed his “Spirit in the Rye” ale. Next time, Joe.

Postscript 6: Speaking of Gary Cherone, he would have loved to have been at the ceremony, but he was on tour in India with Extreme at the time. From the other side of the world, he wanted Norman to know that growing up he loved “Spirit in the Sky” and for many years never knew he was from the other side of Malden. Gary felt that it has always been a song that reached back through the years to his childhood and a lot of fond memories. He was “thrilled” to hear that Malden recognized him and stressed he wished he could’ve been there. Gary continued: “Zei gezunt from India Norman.”

Postscript 7: I left that night very happy to have shared this night with Norman Greenbaum and the Malden community. Thank you, Normie, for the fun you brought into our, at times “Groundhog Day” lives, on this cool night in October 2019. A happy city. One spirit, for this brief moment at least. Music, art, community and our love for Norman Greenbaum. Raise your hands if you agree.