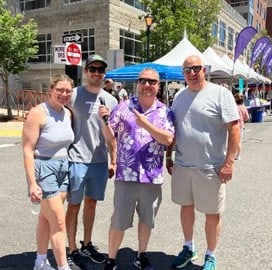 Congratulations to Malden! Malden simply crushed it on Saturday, June 25, as thousands of party pilgrims descended upon Malden Square to take part in the biggest, the baddest, the most spectacular block party Malden has ever thrown! The Phantom Gourmet carnival brought close to 8,000 “phans” to Exchange and Pleasant Streets to eat, to drink and to get their merry on. The weather was spectacular! The event professionally organized (Thank you for behaving yourself, Malden)! The many (50) food stands were amazing (Kowloon! Loretta’s Last Call! JP Twisted BBQ! The Margarita Girls, oops, I mean Margarita’s!). I’ve been to many celebrations in Malden over the years. None can match this one for the sheer size of the event, for the quality of the food vendors and most of all the joy it put into each and every single person I interacted with that day! Congratulations to Malden! You did a good job! You put happiness into people’s lives, sunlight shining brightly on the city we all love so much.

Thank you, Phantom Gourmet, (please come back next year!). Thank you, Kevin Duffy, for being Malden’s #1 cheerleader. Tasked with what seemed like the impossible, Kevin made it look easy. As he always does. Your pops would be proud (once again!). Thank you, Mayor Christenson, for making this happen under at times (from what I had heard) trying circumstances. Thank you also to your staff for that amazing day! Kathleen (Manning-Hall), Maria (Luise), Peter (Caso) and whoever else I may be missing, thank you from the bottom of our hearts!

You may have heard that the Converse family were in Malden recently for a family reunion. If not for Malden’s first Mayor (and biggest benefactor), Elisha Converse (and his offspring), Malden would look dramatically different than it does today (not in a good way). Thank you, Dora St. Martin, for making this happen! Of course, Mayor Christenson was there to greet the clan when they arrived. At the library on Friday night (June 24), these were his remarks: “Good evening. It reads on the 2022 Converse Family Reunion schedule that my role is to provide welcoming remarks, but I think it should really read ‘Mayor gives thanks to the Converse family.’ As you probably know, Malden has had its challenges throughout the years, but our community has always been able to overcome them thanks to the resiliency of the Converse name that continues to remain with us. What also makes Malden special is that we’re a compassionate city as well. We are a community that has always found a way to give back no matter the times we find ourselves living in, which is also characteristic of the Converse name. Elisha was known for his philanthropic deeds and generosity, but one of the things he did like no other was to get community members to contribute their time. This was especially important in how organizations continued long after he was gone, such as the Malden Hospital, Industrial Aid Society, the Day Nursery (across the street), YMCA and right here at the library. So let me end by how I began, which is to say thank you for your presence here this evening and being a part of something that continues to this day, which is a Malden community that is built on a Strong Past, Proud Future – thanks to all of you!”

At Pine Banks Park on Saturday night, Gary charmed the Converse crowd once again: “Typically, my experience as Mayor is that once we give our welcoming remarks, we’re off to the next thing, like the Phantom Gourmet Food Festival, and we don’t look back, but not when it comes to the Converse family. We were there last night, we’re here tonight and we’ll see you at church tomorrow morning. Now as you probably know, Malden is home to Dunkin’ Donuts, and there’s that saying that ‘America Runs on Dunkin’ – well, here in our city, the saying is ‘Malden Runs on Converse.’ And it’s not just the places that have the prestigious Converse name attached to them, but it’s the countless lives touched and shaped over the years that has truly made a difference for us all. For instance, not too long ago in this park there were thousands of people here in celebration of the end of Ramadan. On Thursday, the Library hosted the kickoff to their Annual Summer Reading Program, and next week we are about to employ hundreds of youths for the summer thanks in part to funding from the Malden Industrial Aid Society. Thank you once more for being the foundation from which Malden continues to thrive and be a welcoming place for all.”

He’s the mayor who was on the job when the “The Beast That Ate Pleasant Street” was removed. He’s the visionary boss of bosses that has skillfully guided Malden into the 21st century. He’s the Mayor that single-handedly keeps the streets clean. Heck, he’s even the mayor that is comfortable shoveling snow in a suit coat! He’s also the mayor whom some folks say is the only person photographed more often in his life than Peter Caso. True story! He’s also the mayor with a great sense of humor, a compassionate heart and what Dennis Eckersley would call great moss!

1. Favorite restaurant in Malden growing up? “After collecting my paper route, I would go with my friends to Town House Pizza and then head to the movies at Granada Theatre or bowling at Granada Lanes. Today, Malden has so many great restaurants to choose from. One of my favorites was Pasta Market Café, one because it was located just down the street from my house and, two they had in my opinion the best Eggplant Parm!”

2. Favorite or most inspirational Malden politician growing up? “Ed Markey. I worked on his campaign for Congress while attending Malden High School and later interned for him at his Boston office.”

3. Favorite place or park to hang out in Malden growing up? “Granada Lanes. It was such a favorite place of mine that I ended up working there through High School and College.”

4. Who were your favorite musical acts growing up? “I was very much into rock and roll. My favorite band was AC/DC, and I couldn’t get enough of their music such as “Shook Me All Night Long” and “For Those About to Rock.” My favorite concert was definitely Queen at the Boston Garden headlined by rock legend Freddie Mercury.”

5. Favorite pizza place growing up in Malden? “Town House Pizza. It was so good that I could eat an entire pizza by myself!”

6. Fondest high school memory? “Running for Class President and somehow winning! I believe becoming president of my class and my experience serving in that role is what propelled me into a life of public service.”

7. Where do you see yourself five years from now? “Let me see if I can get through today! Seriously, right now my heart and soul are in serving the Malden community and it’s truly difficult to think much beyond that.”

8. Most inspirational educator growing up? “Mr. Brendan Duffy. He was my Assistant Principal and taught me the importance of respect and leadership.”

9. Favorite/most inspirational national politician growing up? “President John F. Kennedy. I still listen to his speeches today and have a picture of him on the wall across from my desk.”

10. Fondest childhood memory of Malden Square? “Walking with my mother to Malden Square to shop at Jordan Marsh and Sparks Department Store followed by lunch and of course, ice cream at Brigham’s is my fondest memory.”

As Peter Falk’s iconic TV character “Columbo” would say, “Just one more thing, sir” – since this column is all about shining the best possible light on Malden, and since I am (according to a certain somebody on social media) the biggest name-dropper and (expletive deleted) kisser in the city I bring to you yet another Malden “slice of life”: I kid when I include Peter Caso as part of the mayor’s staff. But I do not kid when I say that Peter’s Facebook page ‘All About Malden’ (with almost six thousand cult-like followers/fanatics) was a huge help when it came to plugging the Phantom Gourmet event. Thank you, Pete, for your contribution and for your love of Malden. (Next year we’ll make sure you get a “Very Important Phan (VIP)” admission lanyard). Insert smiley face.

Postscript 1: Happy 6-0 to a great Maldonian, Dennis (Vetree’s) little brother Chris!! Malden is a better place with you in it, my friend! On July 5 if you see Chris out and about, wish him a great day.

Postscript 2: Just as a reminder, “The Beast That Ate Pleasant Street” is Steve Freker trademarked. Brilliant nickname, my friend. Thank you for it.

Postscript 3:
1973. Debbie Ross, Jimmy Damiano and I walk into Ross Tuxedo on Exchange Street. Eddie Andelman and “The Fabulous Judy” greet us like old friends.