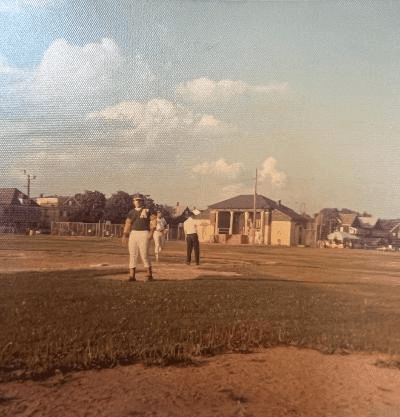 Kevin Larson is now one of the tribal elders. His Malden street cred goes back. Way back. If he wasn’t directly involved in the story, he was indirectly involved in the story. And the stories are plentiful. You may know Kevin as a Malden watchdog of sorts. The famed interlocutor has a long history over the years of placing pointed, insightful letters to the editors challenging the powers that be. Or you may know him as the guy who “married up” when he wed that lovely gal from Medford, his best friend Trish, 34 years ago this month. The marrying up line famously uttered by Kevin’s late father, Jack.

Kevin remembers a night back in 1973 (?) when the Bandstand crowd bum rushed Augustine A’s Manager Steve Ring over a financial matter. Kevin remembers the evening of the altercation at Devir Park vividly and fondly. On this very warm evening, he remembers, one of the young Bandstand ruffians and Steve Ring jawing back and forth about payment for raking the infield. Kevin remembers (his brother) Ed saying, “Ohhh boy, here we go.” The Damiano brothers were present, as well as Mark “Fox” Anastas. Kevin continued, “If memory serves me right, I also recall Steve Ring having an issue with Bob Covelle about broken windows being paid for. Bob put his lawn chair on home plate and sat there holding up the game until such payment was made. My brother Ed did a hat collection real quick ordered by Steve Ring. Fourteen dollars was raised. Ed would tell that story all the time.” Thanks for the memories, Kevin.

Here is (another) little Devir Park story, this one taken from the archives; 1973 was a tumultuous year for Devir Park. Walter “splendid idea, place a large brick building in the middle of Malden Square and shoppers will flock to it” Kelliher was Mayor. According to then Ward 2 Councillor Billy Callahan, the neoclassical, Doric-columned field house (the Bandstand as we called it) had become an “eyesore” and a hangout for “unruly” young people. At one of the City Council meetings, Councillor Callahan proposed a “Resolve” to the City Council. According to written accounts, “passionate wrangling ensued at the meeting.” Callahan lost his temper, and at one point one of the younger observers supporting the rehabilitation of the Bandstand broke into tears. I remember the meeting vaguely, not enough of it to remember this ruckus. The “Resolve” passed 6-5. Those voting to tear the Bandstand down – thus ruining our summer –were Callahan, James Murphy, Philip Elfman, Herbert Jackson, Paul Bartlett and (then) Councillor-Representative Jimmy Conway. Those voting against (and forever remaining near and dear in our hearts) were William Patchell, Neil Callahan, John O’Neill, Tom Cosgrove and a woman who was way ahead of her time, Amelia Miclette. Again, according to written accounts “prospects for improved neighborhood harmony seemed better due to the YMCA Outreach Program organizing youth activities in various parts of the city.” Thank you, Greg Albert (Director) of the program. Thank you, Ronny Cox and Peggy Stallings and Allen Wynne and Paul O’Toole and all the rest of the dedicated Outreach staff who helped prolong the life of the Band Stand another five or so years.

A missive from my pal Mike: “Hi Peter, Mike Picardo here, you know, Harvey’s friend!!! Just wondering if your column/newspaper covers the city of Everett? If so, not sure if you are aware, but 2 Everett High School Players, circa 2017 graduating class and Mass. Super Bowl Champions were drafted by the NFL this past week. Names are Lewis Cines from University of Georgia, drafted in first round by the Minnesota Vikings and Isaiah Likely from Coastal Carolina University by the Baltimore Ravens. I don’t have to tell you the odds of being drafted, but for 2 players to be drafted from the same high school in the same year doesn’t happen very often if at all. As I say, not sure if Everett news is on your radar but if it is this is worth mentioning don’t you think. Your call!! If you need more info on their behalf, Freddy Merchant would be a good source. Thanks for listening. Take care.” Thanks Mike. I’ll be doing something on Isaiah soon. We’re claiming him as one of our own!

More musings from the inimitable pen of the late John O’Brien, whose wit and wisdom endeared him to generations of Malden High School students, Maldonians and faculty at MHS. These baseball-related “Musings” from April 18, 1974, are truly priceless. I usually don’t attempt to explain John’s work, but I am making an exception this time, so I don’t lose too many readers:

“This is the end, beautiful friend, this is the end, my only friend, the end” – congratulations to Johnny “Meets” Mehos on surviving 35 years, five months, and 12 days working as a beast of burden for the USPS. A few months back Johnny was preceded in retirement by Peter Myles, who also survived year after year of the most grueling working conditions known to civilized man – Peter and John getting out with their sanity and good looks still intact. These letter carriers are real heroes worthy of our admiration and praise. John, I wish for you many years of “retirement” happiness. You certainly deserve it. “Meets” is one of the good guys (not only because he is from Edgeworth, insert smiley face). Maldonians, please remember these hardworking individuals around the holiday season. I’m talking lots of green stuffed placed in an envelope with some kind words for these modern-day warriors.