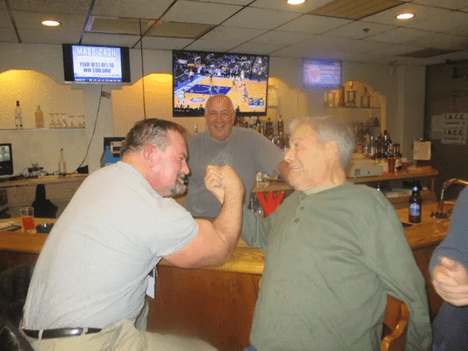 In the “my oh my how time flies department,” it’s rapidly approaching the one-year mark when we lost a giant of a man, one Richard Don “Richie” Cremone. Richie was larger than life. He really was. He took over a room with an unmistakable swagger that endeared him to every single person he ever met. I am sure of that. And, oh how he loved his family. As he aged, he became a lovable teddy bear who would incessantly speak of his beloved daughters, grand-kids and his forever youthful wife (despite being married to Richie for 48 years), Toni-Marie. Toni-Marie surprised me recently. I ran into her at Richie’s old stampin’ ground, the Italian American Citizens Club, when she walked through the door with her daughter Lindsay. I was momentarily at a loss for words (first time in a long time) as she handed me a sealed envelope. As much as my article about Richie meant to her and her family, Toni-Marie’s written words meant so much more to me: “the words and memories you have shared have meant everything, to have others understand how much larger than life he was is so important, so much love and thank you.”

Written from the deep within, time to revisit my love letter to Richie:

Richie Cremone has left the building. But I ain’t forgetting him anytime soon. Yes, the living legend that he was checked out on us unexpectedly last year and is, no doubt, probably part of the Saint Peter’s heavenly choir (he’s already prepared the skiffyskaf for dinner!).

I say unexpectedly because he was scheduled to depart this mortal coil many times in the past. But just like Big Papi’s ’04 Sox, he surprised us time and time again by roaring back and cheating the Grim Reaper himself. Of course he did. That’s Richie!

For all those out there shaking their heads and wondering who this so called “living legend” was, let me take a moment and explain. His longtime companion Pete Robinson once described him as the only man in Malden who helped put at least three well-known local restaurants out of business. Honestly, though, he is much more than that despite what Pete would good naturedly bust his beans about. For the last 30 or so years, he was that beefy guy behind the grill at the Saint Rocco Feast with the greatest, with the most contagious, with the biggest (expletive deleted) smile on his face. Yes, that was Richie Cremone – in his happy place, with friends, grillin’ and chillin’ at the Feast; maybe having a snort or two; smiling whether he likes you or not. That’s right, that was Richie Cremone also.

I admit to writing this under duress. I just adored that big slug. His passing hit me like a Hagler left-right. Floored me. I wasn’t prepared. I can say, not many of us were. I just thought the world of him, not only because he would generously gift me with as much of his famous homemade chicken soup as I could possibly eat (as many mutual jealous friends have speculated) – no sir – I adored him because there was nobody ever created exactly like Richie Cremone. I see people out there right now shaking their heads in the affirmative!

A couple years back we did a late Friday night Tiki-Island run, Sonny, myself, Joe, Greg, Tommy and Richie. The spareribs (on the bone, well done) were flying off the table. The mai tais were flowing. And Richie Cremone was holding court. What a night. He regaled us with tales (some tall, others taller) all locked away in that massive brain of his until our waiter came by the table and told us to drink up and be on our way; “closing time,” he muttered as Richie snatched the bill up. What a night. Richie had that way with people. They just loved him. They really did. I’m rambling again but there are so many places to go when you are talking Richie Cremone.

Let’s go way back to Brandano’s Restaurant on Pearl. That is where I first heard the name Richie Cremone – when he first appeared on my radar. He was the barrel-chested, surly chef with unkempt hair in the kitchen who created Brandano’s famous roasted potatoes. His skiffyskaf first made its appearance at Brandano’s also, I believe. According to Richie, he put Brandano’s on the map. He told me that; it had to be true! My brother Joe, after a workout at the Y, introduced me to Richie while we were at the bar for lunch. Richie looked right through me as he placed another order of steak tips on the grill. It was love at first sight for me.

When Brandano’s closed its hallowed doors, Richie realized a lifelong dream and opened his own place, Cremone’s Restaurant (again) on Pearl Street. The name, not original, but the food – forgetaboutit! Before we go any further, I need to add my two cents: that Richie’s lifelong dream may have been to open his own bar, but his greatest achievement (in my humble opinion) may have been marrying up. His trophy wife, Toni-Marie, is whom I speak of; his greatest accomplishment (oh yeah, and those great kids of his, Julie Ann and Lindsay).

Cremone’s was bumping. It was home to stealers, dealers and sidewalk spielers; con men, sly flies, flat foots, reefer riders, dopers, smokers and boiler stokers; dead enders, stew bums, tough guys, bar flies, rich men, poor men and longshore men. No kidding. Richie’s outsized personality, the best chow in town and some of the best bartenders in the city (with more than generous pours) making it the go-to place in Malden for many, many years. I remember walking in one night with Greg Lucey, Bert Choff and Greg Phaneuf. Luce knew Richie better than most at the time. He (re)introduced me to him. Remember the scene in “Annie Hall” when Annie (Diane Keaton) brings Alvie (Woody Allen) to Grammy Hall’s table for dinner? Remember the look Grammy Hall gave Alvie, and how she visualized him? Well, it wasn’t as bad as that, but you get the idea, right?

We had many laughs about that years later when Richie actually started liking me and acknowledging that I existed. I remember thinking, Richie likes me! He really likes me! Lots of laughs indeed. Richie loved to laugh. And I loved laughing along with him. I remember the last time we sat at the Club together having Ballantines. “Big John” came up to him and asked if he’d like a drink. He told John, “Can’t you see I’m talking?!” What a character that Richie! I am rambling again.

Final thoughts: I not only adored Richie, but I also loved the guy (if you haven’t already figured that out). And I miss him a great deal. Always will. We always will. That’s it for now. But believe me, I ain’t done talking about Richie.

As Peter Falk’s iconic TV character “Columbo” would say “Just one more thing, sir” – Lindsay & Julie Ann, about their father: “We hope if you take anything from our dad’s life it is the importance of making memories. As a family. He is gone way too soon but we will never run out of memories. We thought it would be those momentous occasions that we’d focus on, but it hasn’t been that. We keep going back to the comfort of having him there. That consistent presence in our lives. Knowing he was going to call at least once a day to just ‘check in.’ Now that he’s gone there will forever be an absence – our lives divided into before and after. But his light was so great that even now that he’s gone, we can feel its warmth.”
Postscript 1: Great takeaway from Lindsay’s eulogy to her pops: “He loved to tease. He loved to argue. The man drove me crazy. I’m sure he drove many of you crazy too. But he had a heart of gold and a smile that could illuminate the darkest room. His life was a model of family and friendship. A life truly well-lived. Our mom tells a (funny?) story of hearing their wedding song – ‘Color My World’ – while driving in the car with my dad one day. She turned to him and asked, ‘do you recognize this song?’ to which he replied, ‘yeah, they play it at the Squire all the time.’ That was my dad. He cared about everything and nothing, all at once. The man knew how to color a world though.”