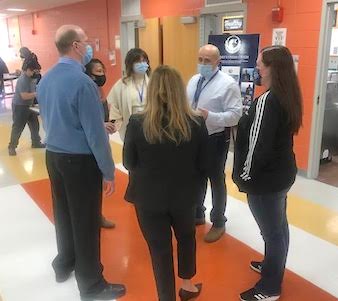 For many Malden Public Schools students, the meals they eat at school each day constitute a major part of their regular, daily nutrition. That is why discussion over the contract for the private Food Service provider for the district is crucial for the health and well-being of the over 6,400 students served every day.

Whitsons Culinary Group is the present private food service provider for the Malden Public Schools, having been in place for the past several years.

Malden Ward 3 School Committee Member Jennifer Spadafora, who is also chairperson of the School Budget Subcommittee, has been heading the discussion and research into both the Food Services contract as well as another major budget consideration, the $3.46 million special education transportation contract. Earlier this school year, at the recommendation of Spadafora, the School Committee voted to exercise a district option for one more year of the existing transportation contract with North Reading Transportation (NRT), with which the Malden Public Schools has contracted for the past several years. The School Committee will be reviewing this contract before the end of this school year and into the fall to determine how to proceed with a new bidding process.

Spadafora recently toured most of the cafeterias in the district to get a hands-on view of operations and to interact with personnel working at the schools as well students who eat in the cafeterias daily. Joining the tour at some of the locations was Malden Public Schools Director of Wellness, Athletics and Physical Education Charlie Conefrey, who gave his input in collaboration with the others at the site visits.

At the last two meetings, the School Committee has heard isolated complaints and criticism during the public comment portion of its meetings, almost entirely from parents of students at the Beebe K-8 School. They have been critical of both nutritional value of the food offerings as well as timing of the lunches as well as operations, particularly the lines waiting to be served during lunch periods. It was not made entirely clear when the lines were discussed if the food service provider had impact on that aspect.

How the School Committee proceeds on the food services provider contract is expected to be discussed at the next School Committee meeting, which is scheduled for this coming Monday, April 4, at 6:00 p.m. in the Malden City Council Chambers at Malden City Hall, 215 Pleasant St., Malden. The meeting is live and the public is invited.

Ferryway K-8 School Principal Michael Ciampa cited a number of positives in a report delivered at the last Malden School Committee meeting. One of the major changes this school year has been the dispersal of the English Learner (EL) students in the K-8 levels from a generally centralized location at the Salemwood K-8 School, which is located on the city’s eastern side, to the various schools around the community, closer to where they live. EL students are those whose first spoken language is not English who are taught in various ways effective for their individual learning.

“Our school population has grown in size and we have welcomed some new EL students, now that they can attend school closer to where they live,” Ciampa told the School Committee – with over 100 new students coming to the Ferryway.

Ciampa also reported improved numbers in various areas, such as attendance, as well as in some of the standardized testing for students at the school.

Ciampa said he is pleased with the new students’ assimilation into their new school environment as well as the work ethic of all the students at the Ferryway School this academic year. “It has been a good year so far and we will continue to work hard to finish strong,” Ciampa said.