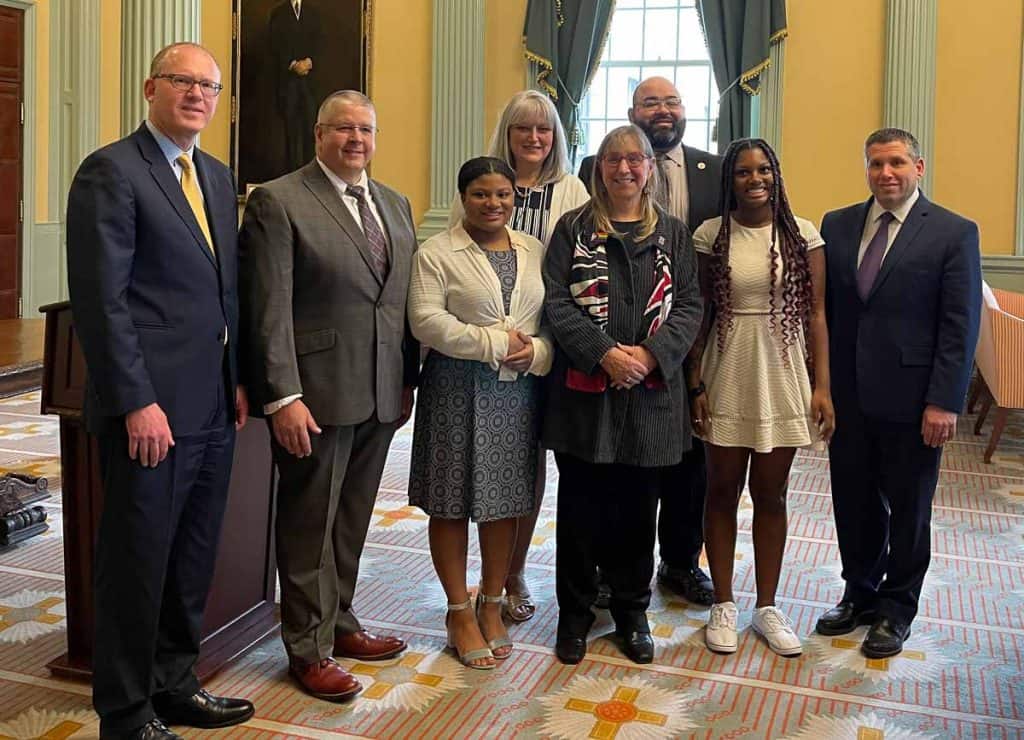 Twins Mya and Deanna Cook, along with their parents Aaron and Colleen Cook, who are Malden residents, joined Senator Lewis on the floor of the Senate Chamber for the debate and vote on the bill. In 2017, when they were students at Mystic Valley Regional Charter School in Malden, Mya and Deanna faced discrimination and abuse when they were told by the school administration that their long braids with extensions violated school policy and would need to be removed. Mya and Deanna refused, arguing that this policy discriminated against black students. The girls then faced escalating consequences, including the threat of suspension. Deanna, a member of the track team, who had qualified for the state finals, was removed from the team. Mya was removed from the softball team and told that she could not attend prom. Even after they prevailed with Mystic Valley Charter School, the Cook family did not stop their fight for justice. They turned their efforts to championing passage of the CROWN Act here in Massachusetts and nationally.

“On the long march toward justice, and especially racial justice, the Senate’s unanimous passage of this legislation marks another step forward,” said Lewis. “We would not be at this point without the great courage and strength of Mya and Deanna Cook, who as 15-year-old students faced discrimination and abuse from their high school for their hairstyles, and bravely stood up for their rights and those of so many other black women.”

The CROWN Act prohibits discrimination based on hairstyles by incorporating hair texture, hair type and protective hairstyle into the definition of race in the Massachusetts General Laws. The protection means that no school district or employer can adopt or implement policies that would impair or prohibit a natural or protective hairstyle that has been historically associated with one’s race.

With the leadership of State Representative Steven Ultrino, who originally filed the bill, the Massachusetts House of Representatives had previously passed the CROWN Act. The House and Senate will now work to reconcile some differences between the versions of the bill that passed in each Chamber before sending the final legislation to Governor Charlie Baker for his signature. If signed into law, Massachusetts would become the fifteenth state to adopt the CROWN Act.