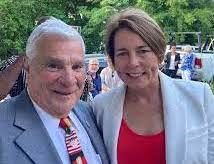 He holds more experience than most other office holders in local and regional political history. In Tuesday’s preliminary for the 35th Middlesex District seat, longtime Malden-Medford state Rep. Paul Donato added a new wrinkle: what appears to be the closest election win in his 40-year-plus career as a politician. Unofficial results from the precincts in the two cities that comprise the 35th Middlesex – Malden and Medford – were not announced until well into the wee hours of Wednesday morning, following Election Day Tuesday.

The 62-vote margin of victory may be a record

The results showed what may be a record-setting, razor-thin, 62-vote margin of victory for the veteran legislator Donato over challenger Nichole Mossalam. Donato is a longtime Medford resident, while Mossalam has lived in Malden for many years. While Mossalam won her home city over Rep. Donato, by a 935-797 margin, Donato prevailed in his city of Medford to eke out the eventual 62-vote unofficial win. There was no official word on any request or plan for a recount of Tuesday’s result, though it frequently takes place after such a close finish.

While close results in local elections have been fairly commonplace in both Malden and Medford in recent years – particularly in City Council and School Committee races – the 62-vote margin in Tuesday’s preliminary election stands out as a possible record-setter in the 35th Middlesex, at any juncture in the election calendar.

Rep. Donato will be reelected in November with no Republican challenger

Since there is no Republican challenger on the ballot, Rep. Donato is on track to be reelected to his 12th consecutive term in the state House of Representatives in the Final Election on November 8. The longtime local legislator – who also served a number of terms as a Medford City Councilor in the 1980s and early 1990s, as well as two terms as Mayor of Medford under the former Plan E/Town Manager form of government there in the 1980s – has for a number of years held lofty posts in the Mass. House leadership under several House Speakers.

This the second consecutive election Mossalam has made a strong challenge to the incumbent Rep. Donato. In the 2020 election, Donato prevailed in the Democratic preliminary election over Mossalam, 55.6 percent to 44.1 percent (5,250-4,188). Then, as in Tuesday’s election, Donato was bested by Mossalam in Malden votes, but prevailed, though by a much larger percentage, with more votes in Medford.

Rep. Donato thanks voters who supported him Tuesday

In an online report Wednesday, following Tuesday’s preliminary election, Rep. Donato thanked the voters who turned out Tuesday and congratulated his opponent, Mossalam, on her campaign this year. Rep. Donato also pledged to keep working for the citizens of Malden and Medford he represents to secure state funding for top priority spending targets in education and transportation. Donato said funding is needed for such critical items as addressing infrastructure needs like roads and bridges, transportation woes affiliated with the MBTA, and teacher shortages in public schools. “We still need to do more [on state education spending] and we’ve got to face a major problem in transportation,” he told the Patch in an online report.

There was some drama on Election Night Tuesday, as Medford reported its results late Tuesday night in the 35th Middlesex race, and Donato showed just a 200 vote advantage there.

Mossalam prevailed by 138 votes in Malden

Just 21 percent of the 35th Middlesex voters in Malden cast ballots, the vast majority of them at the polls on Tuesday, which was slightly higher than the overall turnout in Malden Tuesday, a tepid 18.1 percent (6,646 of 36,698) overall. A steady rain and Election Day being the day after a major holiday weekend – Labor Day – most certainly did not aid the turnout numbers, either locally or statewide.