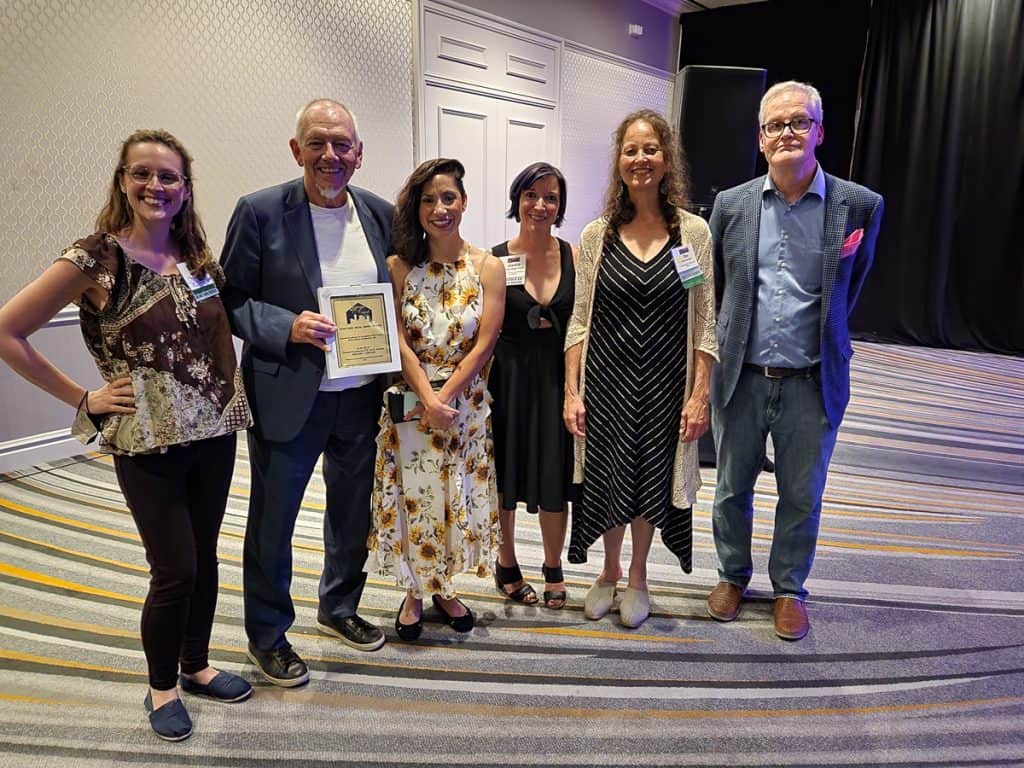 CHICAGO ─ JUNE 29, 2022 ─ Ron Cox, Amanda Hurley, and Ose Schwab accepted the 2022 Hometown Media Overall Excellence in Combined P.E.G. Access on behalf of Urban Media Arts (UMA) during the awards ceremony at the Annual National Conference for the Alliance for Community Media in Chicago. This distinction is awarded to an organization that is responsible for any combination of Public, Educational, and Governmental (P.E.G.) access channels and resources. It is part of an awards program that was established to honor and promote community media, community radio, and local cable programs that are distributed on Public, Educational and Governmental access cable television channels. Proceeds go to the ACM Foundation which is exclusively used for facilitating, preserving and promoting education in community media.

The video earning UMA this award, edited and submitted by Ron Cox and James Mudge, highlights the various events, services, and opportunities UMA offered the community through the pandemic. In this seventeen-minute video, the voice of Sharon Fillyaw describes UMA as an interconnected hub of creativity, dialog and evolving community. This UMAverse as it is called, is the sense of connection and belonging that has been enabled by UMA through various ways for the community to create and be together – especially during a global moment of challenge. (https://youtu.be/XvV8AyL911M to view video)

For Ron Cox the award is a well-timed gift as he retires. It is also an acknowledgement of the input of interns, youth, and program participants that helped the board and staff to translate challenges into opportunities and pivot to reimagine what UMA is and can be in service to the community of Malden that, by its diverse nature, touches the world.

Each year, nearly one thousand entries are submitted in dozens of categories to the Hometown Media Festival. These entries are submitted and evaluated on several factors resulting in over 100 award winners. A panel of judges from the industry evaluate the entries. Awards are presented to the most creative programs that address community needs, develop diverse community involvement, challenge conventional commercial television formats and move viewers to experience television in a different way. The Overall Excellence award is granted to a single community media center in different budget categories.

“The Hometown Media Awards celebrate both the excellence of work and the diversity of media that appears on community channels being produced around the country. The ACM Foundation is proud of their achievement and of how they represent their communities in their work,” said Mike Wassenaar, president & CEO, Alliance for Community Media.