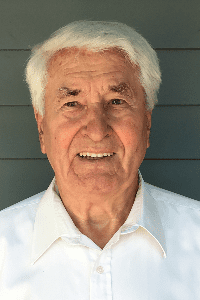 Of Medford passed away peacefully in the company of his family on August 1st after a short illness at the age of 90.

Connie was born in Lagahurry, Isle of Dough, Clonmany, County Donegal, Ireland on January 18th, 1932 to John and Elizabeth (McGeoghegan) McEleney. Connie arrived in America in 1957 after working in Glasgow, Scotland, where, when visiting later, he was proud to point out the churches he helped build and the streets he helped lay.

After arriving in Boston via Montreal, he met the love of his life at an Irish dance at the Hibernian Hall in Roxbury in 1958. Connie and Mary (Gallagher) were married in October 1960. Connie worked as a meatcutter at various supermarkets then as a bus transmission repairman at the MBTA for over 20 years before he retired.

In his spare time, he fully restored and lovingly maintained a Victorian house where he and Mary lived for over thirty years, until his death. Connie loved Irish music and was widely known for his traditional Irish singing that he honed in the fields and at house parties on the Isle. Many of his recordings are included in Ireland’s historical Traditional Irish Music Archive (www.itma.ie/features/playlists/cornelius-mceleney-playlist) .

Connie was a member of the County Donegal Association of Greater Boston, the Leitrim Society of Boston and the Northeast Gaelic Athletic Association, where he was a proud supporter of the Donegal Football team and Boston Shamrocks Ladies Gaelic Football Club.

Connie lived his life to the fullest, traveling all over the country and the world with trips to Australia, China, United Kingdom and on Canada’s Rocky Mountaineer. He went home to his beloved Ireland frequently to visit with his loving relatives in Donegal. For him, the highlight of these trips was always the late night singing session in a family home like the old days.

Loving husband of Mary (Gallagher) McEleney with whom he shared 61 years of marriage; Loving father to Teresa McEleney of Medford, Cornelius McEleney and his wife Maureen McAuley of Atkinson NH, John McEleney and his wife Christine of Reading, Mary Ward and her husband Jay, of Marlboro, Cathy McEleney and her husband Charles Waters of Milford, and Kevin McEleney of Medford. Cherished grandfather of Aisling McEleney, Sinead McEleney, Patrick McEleney, Shannon Ward and Erin Ward. Brother to Daniel McEleney of Scotland and Mary Margaret Connelly of Scotland. Good friend to his King Avenue neighbors and to many,  many others. He was predeceased by nine of his brothers and sisters.

Visiting hours were held at the Breslin Funeral Home, Malden on Monday.  A Funeral Mass was celebrated at St. Joseph Church, Medford on Tuesday.  Interment in Oak Grove Cemetery in Medford.

In lieu of flowers, a memorial donation in Connie’s name may be made to the Irish Pastoral Centre, 540 Gallivan Boulevard, Unit Rear, Dorchester, MA 02124 or www.ipcboston.org .