A NEW FENWAY CLASSIC: Malden-Medford Thanksgiving Football Game will be played at Fenway Park this year! 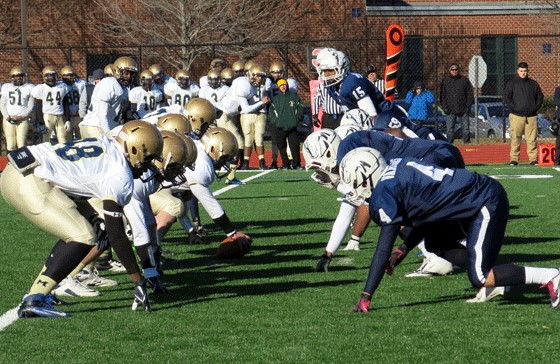 Every time they play the game, everyone involved is etching a small place in the overall history of their respective school by participating in the game. For real, not even the once-in-100-years COVID-19 pandemic could derail the – now longest in the nation – Malden-Medford football rivalry. While other rivalry series paused due to the once-in-100-years pandemic, the show did go on for the Malden-Medford game.

How long is this series, anyway? It is so long that it has actually been played despite two pandemics, including the Flu Pandemic that swept the world in 1918-19. With some fantastic news that has just been announced, the traditional football rivalry just got even more special: Game #135 of the heralded series will be played on Tuesday, November 22 – at FENWAY PARK in Boston, home of the Boston Red Sox!

Fenway Sports Management (FSM) earlier this year announced that high school football would be returning to “America’s Most Beloved Ballpark” this fall and now has announced that Malden-Medford Game #135 will be part of a five-game slate to be played at Fenway Park set for Thanksgiving Week. Malden High School will take on Medford High School on Tuesday night, November 22 at 7:30 p.m. at Fenway Park.

“Thank you to athletic director Bobby Maloney and the Medford High School administration for making this possibility a reality for our kids.”

“Both the Malden and Medford communities will get to experience this historic rivalry that dates back to the 1880s,” said Conefrey, himself a 1997 Malden High School graduate. “There is always something special about football under the lights, but this brings a whole new meaning.”

“We are thrilled to host high school football once again at Fenway Park,” said FSM President Mark Lev in an FSM news release.

“Thanksgiving rivalry games are always a highlight of the high school football season and adding the iconic backdrop of Fenway Park will only make the occasion more special for the players, coaches, and fans. We look forward to welcoming the communities and football fans to the park to celebrate this time-honored tradition,” he added.

Malden High second-year football Head Coach Witche Exilhomme, who captained the 2011 Malden team to a dominating, 36-0 win over Medford his senior year, said his team is ecstatic over the great news. “It is just a great opportunity for our football program. I am just so excited for our players to have this game on the schedule,” Coach Exilhomme said. “To be able to play a football game at Fenway Park is just something these kids will never forget.”

For anyone interested in attending what will be a spectacular event, general admission tickets are $20 each day. There are $40 per person tickets available for luxury suite seating. Also, 25 percent of every ticket sold will return to the school you support. Ticket purchasing information and more can be found at www.redsox.com/highschoolfootball.