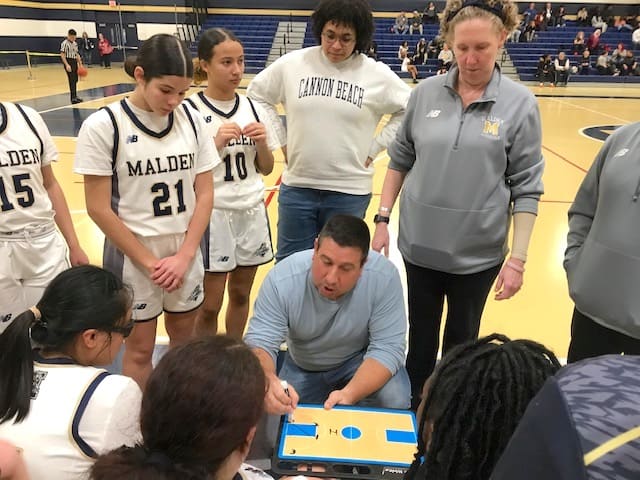 Scott Marino looked like he ran a marathon after Tuesday night’s game.

Or at least scaled a very large mountain!

The second reference might be the most appropriate, considering Coach Marino’s team had to go from the bottom to the top — and quickly — to be able to pull out a huge comeback win over Medford High, 49-45, at Malden High School’s Roy Finn Gym.

The win was especially satisfying, Marino explained afterward because Medford had trounced Malden in Medford in the season opener for both teams, 52-22. “(Medford) beat us by 30 when we played them earlier this year. We prepared for this one with that in mind,” Coach Marino said.

Down 12 points at halftime and then going down 15 points one minute into the third quarter, after a Medford three-pointer, Malden suddenly went into Tasmanian Devil mode.

Led by senior co-captain Anna Yak and junior co-captain Tori Gammon, Malden first went on a 15-2 run in the third quarter — cutting the lead to just two points (35-33, Medford at the end of three) — and then won the “rock fight” that the fourth quarter became.

So, you look a little tired, Coach!

“I’m exhausted,” Coach Marino said, with a big smile. “But it’s in a good way. I am so happy for our kids that they worked so hard and got a win for all their efforts.”

Gammon led all scorers with 19 points. That game-high number is an impressive mark in itself. Check this out, though” ALL the junior’s points came in the SECOND HALF! That’s right ALL 19 points — 19-of-27 scored by Malden in the second, were scored by Gammon.

It was Gammon’s first game back on the court after missing the last 4 games (where Malden went 2-2 overall) due to a sprained knee.

Gammon was simply “En Fuego” in the third quarter and much of the fourth. She scored 8 of Malden’s 15 third quarter points, where they outscored Medford, 15-5.

Fourth quarter? It was “All Tori, All the Time”. The third-year varsity player scored 11-of-12 Malden fourth quarter points. While her teammates may have missing shots, not so for Gammon.

The Tornado junior also went 5-of-9 from the free throw line. No free throw was bigger than the one she sunk to put Malden ahead, 49-45 with 11 seconds left to play. Medford missed its last shot and the game was over.

Coach Marino had lots of praise for senior captain Anna Yak.    “That was one the best games Anna (Yak) has played here, if not the best,” Coach Marino said of the third-year varsity starter, who scored 10 points and hauled in 12 rebounds, as well as 3 steals and 5 blocks defensively.

Coach Marino confirmed that Yak’s defensive work late in the fourth quarter was perhaps the biggest play of the game. Yak’s steal, under the Medford basket, consisted of ripping the ball out of Kaleigh Dixon’s hands under the Mustang basket— with under a minute to play, and the game tied— leading directly to a Malden basket, putting Malden up, 45-43, and they never gave back the lead.

After Gammon’s free throw and Medford’s miss at the buzzer, the celebration began, complete with happy screams and lots of hugs.

It is a busy week for Coach Marino’s Tornados. After Tuesday’s win, Malden Girls Basketball was on the road at Lynn English last night (7:00 p.m.)

Malden has a third game this week tonight. The Tornado girls are hosting Salem (MA) HS at the Finn Gym at 6:00 p.m. The Junior Varsity team plays at Finn Gym at 4:30 p.m. and the Malden freshman girls plat at Beebe K-8 School at 4:00 p.m.