Malden High football kicks off preseason with high hopes for 2022 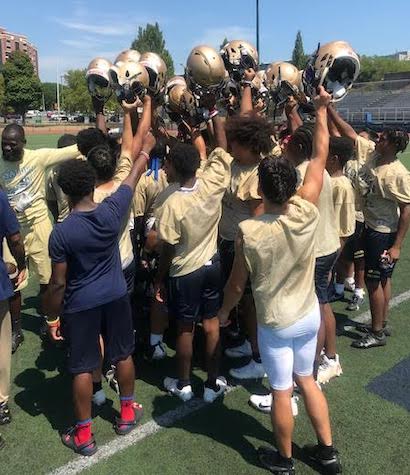 The calendar says the preseason has officially started for high school fall sports, but its football season every day of the year for those student-athletes who just can’t get enough of the sport.

Malden High second-year Head Football Coach Witche Exilhomme says he believes he will have more than a few of these kinds of players on his Golden Tornado roster this 2022 season.

It is no coincidence that he believes his Malden team will challenge for everything this fall.

“We have a strong core of athletes who have put in a great deal of quality time this past offseason getting prepared for this season,” said Coach Exilhomme, as he kicked off his second preseason camp as head coach of his alma mater’s football program.

“They have made great strides since last season and it has shown so far in the preseason camp, they are ready to go,” the Malden coach added.

Malden kicks off its season with a pair of non-league games, the season opener less than two weeks away, on the road on Thursday, September 8 at Whittier Tech (6:00 p.m. start, in Haverhill).

Malden is coming off a 2-8 campaign in Coach Exilhomme’s first season in 2021, which was capped by a solid, exciting 12-10 victory on Thanksgiving Day over Medford, a game decided by a Ronald Juarez 32-yard field goal for the Tornados.

The coach said his team’s goals this year are high: Challenge for and win the Greater Boston League championship and get to Gillette Stadium to have a chance to win it all in December.

Malden’s “why not us?” theme comes from the effort put in by a good amount of the players in the offseason, according to Coach Exilhomme. “Our players have worked harder than most teams in our league and in the state. It is time they got rewarded for that hard work.”

Leading the way for Malden High this year will be a quartet of captains, four seniors and sophomore.

Senior 6-1, 205 defensive end Zachariah Pan is a returning defensive starter for a group that should be one of the team’s strengths. He will serve as quad-captain along with starting senior running back and linebacker Makiel Coulonges-Blaise (5-10, 175), senior defensive back and split end Andrew Louis (6-2, 200) and sophomore linebacker James Hyppolite (6-0, 195).

Hyppolite is believed to be perhaps only the second sophomore in Malden High football history to be named captain in his 10th grade year.

“James (Hyppolite) commands respect with his work ethic and his knack for motivating his fellow student-athletes. He may be in just 10th grade, but his teammates listen to his words and follow his lead,” Coach Exilhomme said.

TORNADO WARNINGS: Malden will get its first taste “full pads” work against an opponent tomorrow (Saturday, August 27) when the Tornados travel to Beverly High for a tri-scrimmage against host Beverly along with non-leaguer Winthrop High….   Beverly High athletic director is former Malden High AD Dan Keefe, who has run the Panthers athletic program since 2016… Malden has a “dress rehearsal” game scrimmage on tap for next week at home at Macdonald Stadium vs. BC High at 6:00 p.m. on Friday, September 9.  Malden sophomore quarterback Aidan Brett is one of the few players in Malden High history who played in varsity games in three different sport his freshman year. Last year, 2021 he started at QB in the Thanksgiving win over Medford, then played a few minutes in varsity basketball in February 2022. This past spring Brett really shined, starting varsity and playing every inning of every varsity game for Malden High.