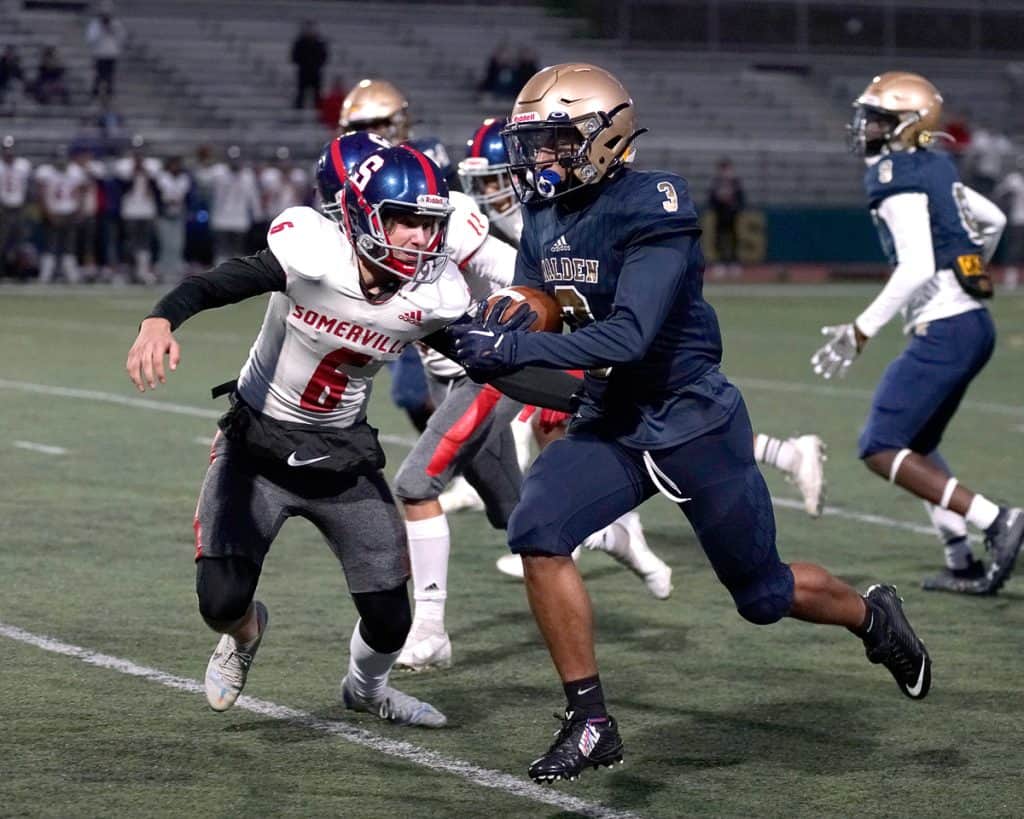 Thanks to the 1-2 punch of senior captain Mak Coulanges-Blaise and junior Davian McGuffie, Malden High School is off to its best start in years. The newly-minted Golden Tornado power pair combined for six touchdowns in Friday night’s 44-12 win at home over Greater Boston League (GBL) rival Somerville at Macdonald Stadium in Malden.

Malden built a 32-0 lead in the second quarter and never looked back in a second straight demolition of a GBL opponent.

With the win, Malden topped its win total of the past four seasons, improving to 3-1 overall (2-0 GBL). Malden now sits atop the Greater Boston League standings for the first time in over five years.

Malden looked to keep it rolling last night, hoping to celebrate Homecoming Night with another victory when GBLer Lynn Classical came to town for a 6 p.m. kickoff (after Advocate press deadline).

“We played well enough to win, but we still have a lot we have to work,” Malden second-year head coach Witche Exilhomme said.

Coach Exilhomme made it a point to single out the play of one of his units as particularly valuable in its contributions.  “A lot of the credit for our success has to go to the offensive line.   We had to build an entirely new offensive line with new players, some of whom had not played the positions before, and they have come through for us,” the Malden coach said.

Coach Exilhomme yesterday, before the game, said his team is looking forward to the challenge posed by Lynn Classical (3-1) when the Rams arrived in town Thursday. “They are well-coached and athletic; we have to match them.”

Blaise had rushes of 8 and 5 yards and a 27-yard touchdown pass reception from sophomore quarterback Aidan Brett.

The 5-10, 190 Blaise, who leads Division 3 in scoring with 12 touchdowns and one two-point conversion for 74 points, scored all of his points in the first half. The senior captain, who has scored seven TDs in the past two weeks alone, opened the scoring when he capped a seven-play, first quarter scoring drive with an eight-yard run.

After Malden’s defense stuffed Somerville’s first offensive possession for negative yards, Malden took over on the Highlanders 48-yard line and was back in the end zone three players later.

Blaise (12 carries, 96 yards) carried twice for 21 yards. Then Malden changed its offensive tune when Brett faked a handoff to Blaise, pumped downfield once then rolled out two or three steps before dumping the ball off to Blaise around the right end, when the Tornado runner was all alone, sprinting 27 yards for his second TD of the night and a 12-0 lead.

That is how the first quarter ended with Malden leading, 12-0, after both conversion rush attempts failed.

McGuffie had a 19-yard TD catch from Brett on Malden’s first offensive drive of the third quarter. McGuffie caught a bubble screen pass over right end, close to midfield, and then shifted into high gear down the right sideline, 19 yards for another Malden touchdown and an 18-0 lead. Brett overthrew junior wide receiver and co-captain Gabriel Vargas Cardoso and the score remained.

After Blaise rolled into the end zone shortly afterward from five yards out, for a 24-0 lead. McGuffie then made the most electrifying play of the night when he picked off a Somerville pass while playing cornerback. McGuffie hauled in the errant pass around midfield and then burned 46 yards into the end zone for the “Pick Six”,

McGuffie, who was named both a Malden High School “Player of the Week” and Globe “Player of the Week,”: then added a long, 56-yard rush for a score. For the Highlanders (0-4), junior Jeremiah Elie returned an interception 30 yards to score and also caught a 46-yard touchdown.

EXTRA POINT KICKS — Thursday night’s game was dubbed the Homecoming Game for Malden, as a traditional week of activities was carried out and hosted by the Sophomore Class of 2025…  For the first time in a number of years, a freshman quarterback threw a touchdown pass, when ninth-grader Matthew Stelmach, a 6-1, 180 rookie, connected with 6-5 junior captain Gabriel Vargas Cardoso for a 14-yard TD late in the fourth quarter…. Malden has now hit 40-plus points plus this season and has outscored its opponents 136-92 through four games. Last season, for the entire season, Malden scored just 44 points total….  Friday night was the first game sophomore quarterback Aidan Brett connected for two TD passes in one game in his career….  Last year, then first-year head coach Witche Exilhomme added former Malden High and Framingham State standout Anthony Pappagallo to the coaching staff as offensive coordinator. This season, Coach Exilhomme has kept the family connection going by adding his own former head coach, Joe Pappagallo as a full-time assistant coach, for quality control on both sides of the ball…. Also returning to the staff are former MHS defensive coordinator Pat Donoghue, a 1985 Malden High graduate and another former MHS coach and standout James Brito-White, Class of 2008…. Malden goes back-to-back “Lynn’: on its schedule next, on the road at Lynn English (Manning Field, 67:00 p.m. start) next Friday, October 14….There is no JV football game on Monday, October 10, the holiday. Malden and Lynn Classical’s junior varsity matchup is set for Tuesday, October 11 at 4:00 p.m. at Macdonald Stadium, Pearl St., Malden.