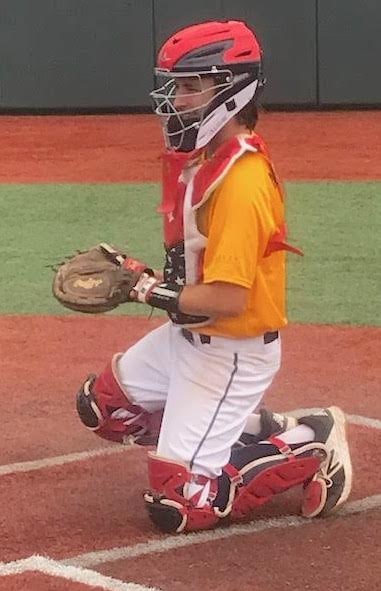 It’s been a busy summer for some of the top players from the Greater Boston League and the action continued this week in the statewide Bay State Games High School Baseball Showcase Tournament.

The annual, five-game tourney kicked off Tuesday this week and wrapped up Thursday at Monan Field on the campus of UMass/Boston.

For the Bay State Games, it is a special milestone year as the Games, hosted by the Massachusetts Amateur Sports Foundation (MASF), is marking its 40th year.

The Baseball Showcase has been held since 1989 and is marking its 34th summer.

Four standout players from the local Greater Boston League continued a busy summer by playing for the Metro Team in the tournament, which finished with a 2-3 overall record and was battling for a medal until the final day Thursday.

The team was coached by Malden High School head baseball coach Steve Freker.  Coach Freker is the longest-serving coach in the history of the Bay State Games, in his 34th consecutive year with the Metro Baseball Team, every year of its existence.

“It has been a pleasure and an honor to coach and help coordinate the Bay State Games Baseball Showcase all these years,” Malden High’s Coach Freker said. “It is such a fantastic resource for players who want to pursue college baseball opportunities, or just compete against the best young baseball players in the state.”

Only players who have completed grades 8,9, 10 and 11 may participate in the five-game round-robin tournament, which was played Tuesday, Wednesday and Thursday this week.

Popp slammed a double and single and stole two bases, scoring three runs in a 5-1 Metro win over Central on Tuesday. He also made numerous solid defensive plays in centerfield, tracking down balls with fine catches and throwing out runners trying to score at the plate.

“Mikey (Popp) is one of the best players in this region and in Massachusetts and really showed it at the Bay State Games,” Coach Freker said. “A lot of college coaches said they were impressed with his abilities and will be following him through the rest of the summer at other events.”

Malden High sophomore Ryan Coggswell put a big feather in his cap when he broke up a no-hitter bid by Central Catholic pitcher Lucasz Rondeau with two outs in the bottom of the seventh.

One out away from making Bay State Games history with what have been just the 12th complete-game no-hitter ever in 34 years, Malden’s Coggwell made his own history when he lined a two-out single down the left field line to break up the bid. “I was just waiting for my pitch and I wanted to put the ball in play,” said Coggwell, who led Malden in hitting this past spring with a .346 average. “I did not realize it was the only hit of the game until they told me at first base.

“It was a great feeling!” Coggswell told The Advocate.

Simpson, a two-year Malden starter as a sophomore, had three hits and also was steady in the middle of the Metro infield at shortstop. He pitched a 1-2-3 inning on Wednesday in a tight, 4-2 game with Coastal.

“Jake (Simpson) did a great job all-around,” said Metro assistant coach and BC High head coach Steve Healy. “He’s only a sophomore, but he’s got all the tools and a great deal of talent.”

Malden High freshman Bo Stead said he enjoyed playing in the Bay States Game. “To be able to play against such great competition was so much fun and I was glad to have been a part of it,” said Stead, who started nearly every game behind the plate for Malden High varsity this past spring.

Popp said he was pleased to have been able to contribute to a solid week of high-end baseball. “There were tons of college coaches here and some great players on the all the teams. The competition is some of the best I’ve played against in this tournament and in the state All-Star Game.”