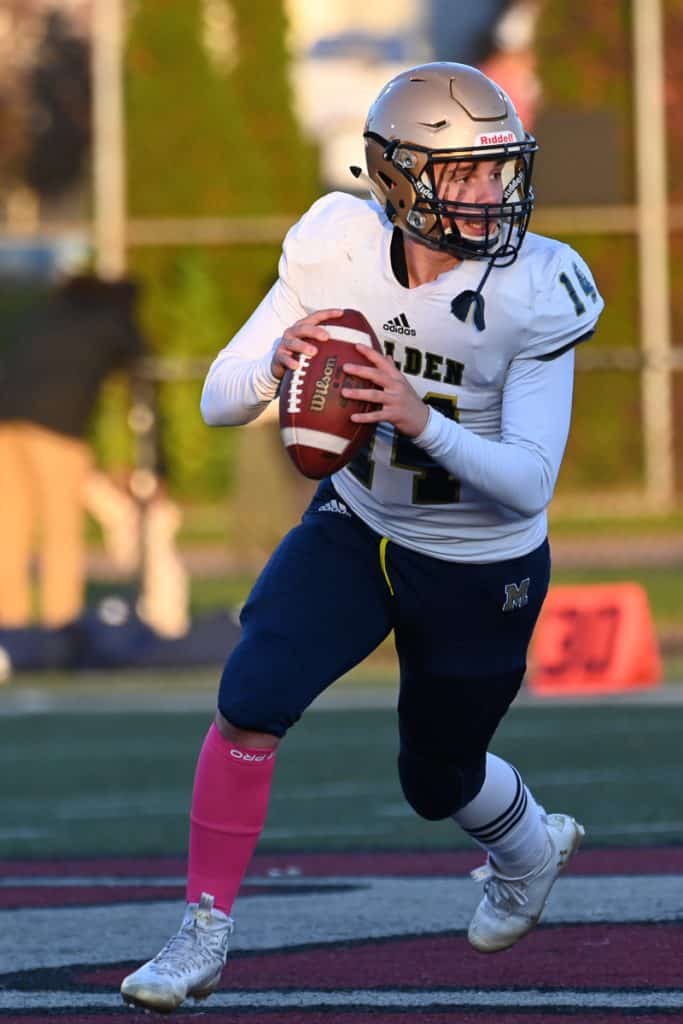 With the statewide high school football playoffs beginning this weekend with the Round of 16 games, the Malden Golden Tornadoes (2-4 in the Greater Boston League [GBL], 3-5 overall) are on the outside looking in while trying to get healthy for the consolation games. Malden decided to opt out of the first week of non-playoff games to get healthier – to, hopefully, get some of the injured players back on the field this year. The season officially wraps up against Medford on Thanksgiving Day.

The Golden Tornadoes dropped to 27th in the latest Division 3 power rankings out of 31 teams. They were ranked 26th two weeks ago. Malden’s most recent loss was against the Revere Patriots (4-2 in the GBL, 4-4 overall), who upended them last Friday night (Oct. 28), 23-0, at MacDonald Stadium.

When summarizing this game, Malden’s recent narrative remains the same, and there’s nothing coach Witche Exilhomme can do about it. “We just need to get healthy to get some bodies back,” he said after the Revere game. “Injuries are simply our biggest obstacle right now.”

But it’s not all bad news for Malden. After senior linebacker John Lloyd left the Revere game with an injury in the first quarter, sophomore backup Matt Brito stepped up big, according to Exilhomme. Brito was credited with two sacks, six tackles and two forced fumbles.

“We also struggled to get anything going against Revere after our junior starting center Karl Lange and starting sophomore quarterback Aidan Brett left the game with injuries in the second quarter,” said Exilhomme.

“We have a bye week this week to, hopefully, get healthy, but if Brett is out for next week’s game, freshman Matthew Stelmach will step in for him,” added Exilhomme. “If this group had stayed healthy this year, we would be getting ready for the playoffs right now, possibly also being among the top five teams in Division 3. I had high hopes for this club.”

The 2022 MIAA North football non-playoff schedule for Week 9 is as follows: Haverhill at St John’s of Shrewsbury, Lexington at Lowell, Acton-Boxborough at Newton South, Lawrence at Malden Catholic, Waltham at Belmont, Lincoln Sudbury at Cambridge Rindge & Latin, Winchester at Beverly, Arlington at Boston Latin, Lynn English at Salem, Somerville at Wayland, Medford at Burlington, Wilmington at Dracut, Danvers at North Andover, Gloucester at Essex, Pentucket at Northeast Voke, Ipswich at Whittier, Greater Lawrence at Saugus, Lynn Tech at Greater Lowell, Hamilton Wenham at O’Bryant, Boston English at Chelsea, Georgetown at Excel, and Minuteman at East Boston; opting out of Week 9 is Malden; weeks 9 and 10 is Roxbury Prep.