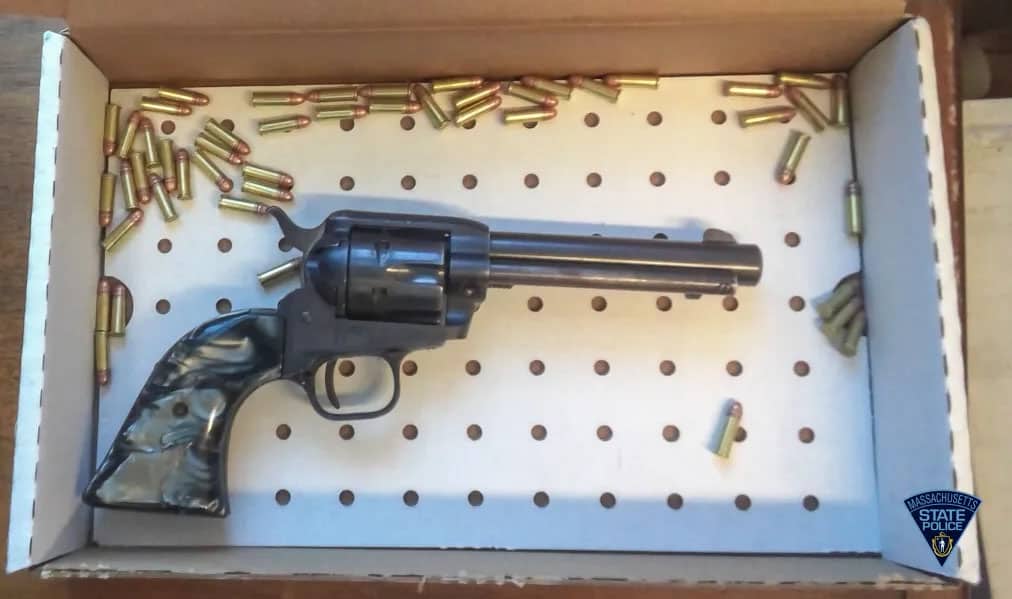 Reportedly, on Monday evening, Massachusetts State Police Trooper Carlo Mastromattei, who is assigned to the Troop A Community Action Team, was on patrol on Revere Beach when he saw a black BMW sedan traveling on the Boulevard with no front license plate and an expired inspection sticker. He queried the vehicle based on the rear plate, and he learned that the car’s registration had expired last month.

Trooper Mastromattei stopped the car, which had three male occupants. Several other Troopers responded to back up the stop. Troopers removed the occupants from the car, informed the driver that the vehicle would be towed and conducted an inventory of the vehicle per Massachusetts State Police policy.

Allegedly, inside a fanny pack on the front passenger seat, Trooper Mastromattei observed approximately 30 rounds of .22 caliber ammunition, and Trooper Matthew DeVito then located a Colt single-action Frontier Scout 22 LR revolver, which was loaded, under the front passenger seat. And a check by the Troopers revealed that none of the three occupants had a license to carry a firearm.

Allegedly, in the car’s trunk, the Troopers found a large black duffle bag with the word “Cookies” on it; it contained multiple bags of a substance believed to be marijuana, as well as 25 plastic tubes containing, apparently, pre-rolled joints. Allegedly, the Troopers also located items consistent with the packaging and sale of narcotics, including two digital scales, a cigarette rolling machine and an electric grinder. Reportedly, subsequent information received by the Troopers revealed that the marijuana belonged to the driver, Bryan DaRosa.