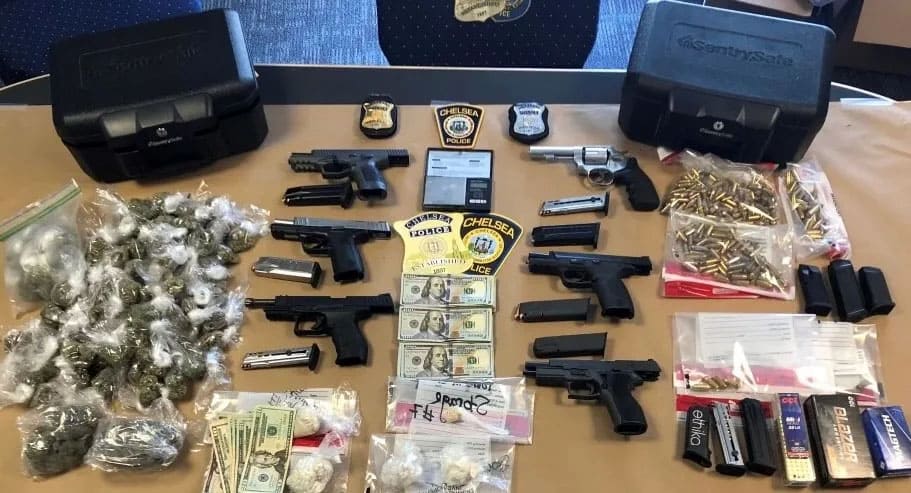 Last week the execution of several warrants by Chelsea Police and Massachusetts State Police (MSP) resulted in the arrests of a suspected drug trafficker and three other men on firearms charges, as well as the seizure of six illegally owned guns. Chelsea Officers and MSP Troopers made court-authorized entry into two apartments at 78 Washington Ave., Chelsea, and also into a residence at 20 Cary Ave., Chelsea. At the latter address, the entry team also had an arrest warrant for resident Timothy Ramos, 27, a suspected associate of the targets in the narcotics investigation, charging him with a June home invasion on Orange Street in Chelsea.

The investigation leading to the arrests began several months ago when Chelsea Police began conducting undercover purchases of crack cocaine and fentanyl from targets dealing out of a 78 Washington Ave. apartment, including Elijah Acevedo, 26, of that address. During the same period of time, on, April 21, members of the State Police Detective Unit for Suffolk County and Chelsea Police responded to a nonfatal daylight shooting in the area of 78 Washington Ave. An innocent bystander was shot in that incident and transported to a hospital for treatment. Troopers from the detective unit and the Revere Barracks developed information indicating that Elijah Acevedo was the intended target of that shooting.

Meanwhile, on June 11, Chelsea Police responded to a home invasion at 36 Orange St., Apt. #1, Chelsea. Their investigation identified Timothy Ramos as one of the suspects in that crime. The State Police Violent Fugitive Apprehension Section began searching for Ramos. Based on the aforementioned investigations, detectives obtained search warrants from Chelsea District Court for Apartments 1 and 7 at 78 Washington Ave. and for 20 Cary Ave., as well as an arrest warrant charging Ramos with the June home invasion.

The operation resulted in the arrest of four suspects and the recovery of six illegally owned firearms (five pistols and a revolver), 58 grams of crack cocaine, 30 grams of heroin, an undetermined amount of marijuana, $2,000 in U.S. currency, and a quantity of ammunition. Arrested were:

1. Timothy Ramos, 27, of Chelsea, charged with the home invasion warrant and two counts of unlawful possession of a firearm;

The defendants were booked at the Chelsea Police Department and were expected to be arraigned that day. The cases are being prosecuted by Suffolk District Attorney Kevin Hayden’s office.