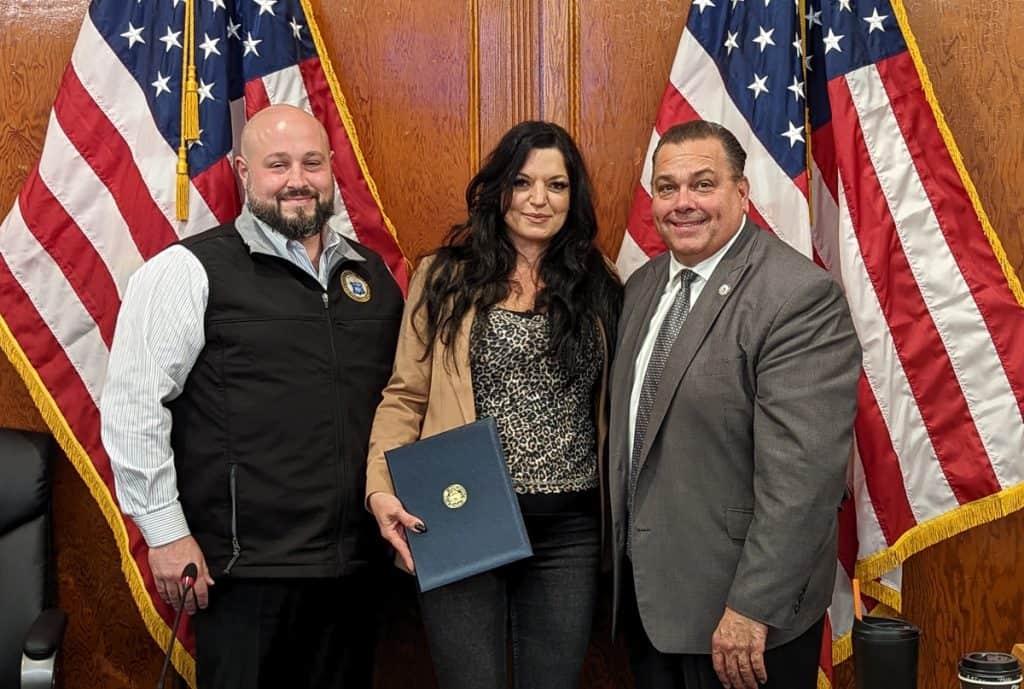 Signore Square is a cleaner part of the city today because of Marilena LoGrasso. Monday night the City Council awarded a Certificate of Appreciation to LoGrasso for her cleanup of the square, which is a veterans’ memorial to the Signore Brothers located on the corner of Signore Terrace and Patriot Parkway.

“Signore Square needed some upkeep, and my friend Marilena got tired of looking at it every day, so she decided to go to Home Depot and got mulch and solar lights and whatever else she needed to clean up that area out of her own pocket and with her own time,” said Ward 3 Councillor Anthony Cogliandro, who recommended LoGrasso for the certificate. “I know that she made the neighborhood happy.”

“I was just walking my dog and decided, just let me clean this up today,” said LoGrasso. “I really didn’t expect this [certificate]. I appreciate it a lot.”

In other business on Monday night, Ward 2 Councillor Ira Novoselsky probably wishes the MBTA was more like LoGrasso when it comes to cleaning up messes. Novoselsky introduced a motion asking the mayor to request the MBTA to repair Flaherty Square Park – at the site of the former bus stop on Beach Street at North Shore Road – to its original condition. The MBTA recently eliminated the bus stop at this location and did not repair the park where the shelter was once located, Novoselsky stated.

The Ward 2 Councillor also voiced some general frustration with how the MBTA operates in the city. “Once again, the MBTA is not doing the best for the residents of Revere,” said Novoselsky. “They are eliminating our bus stops, and they are causing our businesses on Broadway to be put aside with a bus lane at certain times on it.”

Novoselsky said he disagrees with the Revere Traffic Commission’s recent decision to permanently allow a permanent bus lane on Broadway on weekday mornings. “It is obvious that [the MBTA] really doesn’t care about people in Revere or the businesses,” he said. “The MBTA has not been very friendly to Revere, even though we have been friendly to them. I’m disappointed in the traffic commission for helping them make their goals, not our goals.”

As to the motion he presented, Novoselsky said the MBTA broke up a traffic island on Beach Street across from Peter’s Super Beef when they removed a bus shelter. Novoselsky said he would expect the MBTA to repair the area and bring it up to the same condition it was when the city gave it to them to use as a bus shelter.