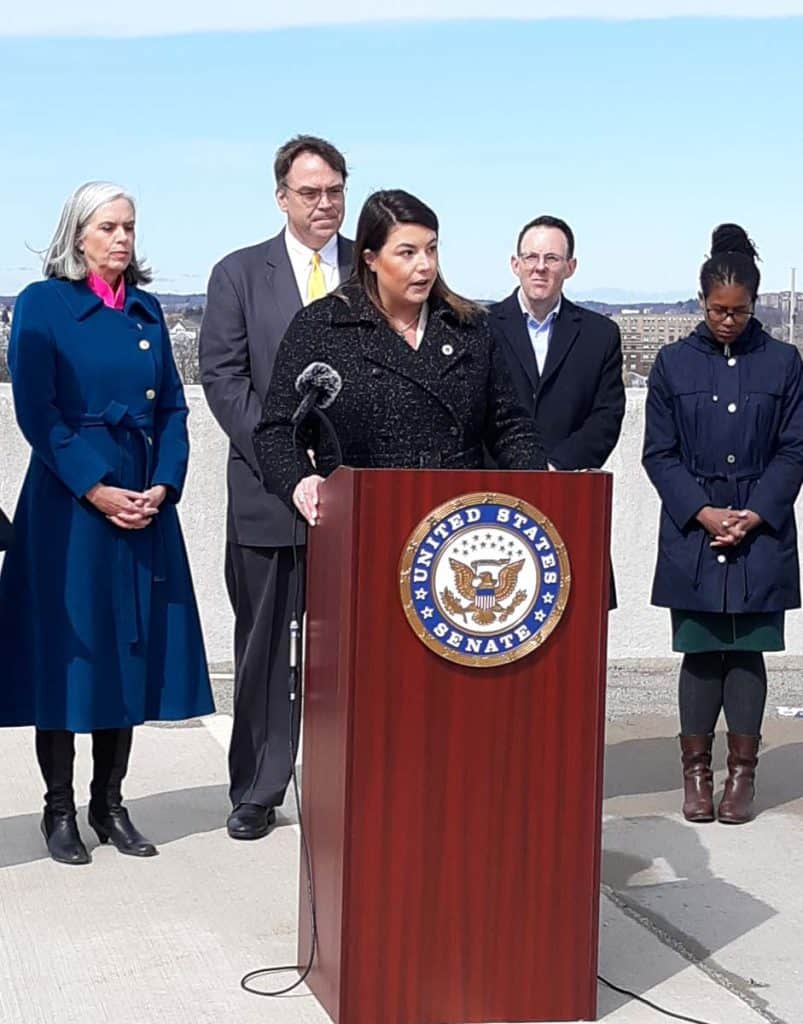 U.S. Senator Ed Markey and Congresswoman Katherine Clark joined Mayor Brian Arrigo and other local and state officials on the roof of the Wonderland parking garage last Friday, March 25, to announce $4 million in federal funding they helped secure for the proposed Wonderland Commuter Rail Station and Blue Line Connector. The elected officials all touched upon the importance of the project to better connect the North Shore to Revere, and about the role public transportation has played in the history of the city.

“We are here today to celebrate the renaissance of Revere,” said Markey. “Four million dollars is a down payment on a long-awaited project that would vastly expand public transit access between Metro Boston, Revere and the North Shore, connecting the Blue Line and the Newburyport/Rockport commuter rail line.”

Markey noted that right now if someone takes public transit from the North Shore to Revere Beach or the airport they have to go all the way into Boston first, cross over to Government Center and ride the Blue Line back out. “If you live in Revere or Winthrop and want to take the commuter rail into Salem, Gloucester or beyond, you also need to go into downtown Boston,” said Markey. “This costs the people of Revere and the North Shore time, and it costs them money. The lack of accessible public transit also puts more cars on the road, worsening commutes, increasing carbon emissions and exacerbating pollution in the majority-minority cities of Revere, Lynn, Everett and Chelsea along Route 1.”

Clark said that when the conversations began about new opportunities for community project funding, she went to the Mayor and other community leaders to ask them what investments could be made to really make a difference in the lives of residents. “The Wonderland multimodal connector was the resounding response,” said Clark. “This project has it all: the transit benefits that will modernize the Commonwealth’s commuter rail network, the regional connectivity, reduction in traffic and congestion on our roadways, and in return, reductions in carbon emissions.”

Arrigo noted that the city has been shaped by the rail line and Revere Beach throughout its history. “Thanks to our partners at the state and federal levels, we’ve made tremendous strides in the last 10 years to bring the city of Revere – bring Wonderland, bring Waterfront Square – into the 21st century,” said Arrigo. “We’ve been able to do this while paying homage to our unique past and addressing key transportation and environmental justice issues. The $4 million in the Congressional omnibus towards the Wonderland multimodal station will get the ball rolling on a project that the city of Revere has dreamt about for several years.”

State Senator Lydia Edwards said the project is a great opportunity that will create a regional traffic plan that moves not just people but also the economy.

State Representative Jessica Ann Giannino said that, as the representative and a lifelong resident of Revere, she is excited for the opportunities it will bring to the city. “Revere, along with other gateway and environmental justice communities have long faced the brunt of pollution and everything it brings to our city, traffic congestion and everything caused by daily transit,” said Giannino. “This multimodal transit facility will ease the burden of both factors and improve the quality of life for the people in Revere.”

State Representative Jeff Turco said the project is transformative for the region. “As we are building up these new condominiums and bringing new people into Revere, we also want to make sure we don’t lose the vision that Charles Eliot had for our beach, and we want to make sure that this beach is always open to the people,” said Turco. “This multimodal transportation is going to set up a few things; it’s going to help us reach our very aggressive climate change and carbon emissions standards that were set for our Commonwealth, but it’s also going to set up new possibilities for young Ed Markeys and young Jeff Turcos to come here to Revere Beach not just from Revere, but from Lynn and from Gloucester and from Rockport and from Newburyport. I think it is such an exciting opportunity for the people of this area.”