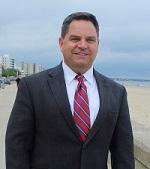 The three percent fee on credit cards to pay for city excise taxes continues to be a thorn in the side for Ward 5 Councillor Al Fiore. Earlier this year, Fiore introduced an order asking Mayor Brian Arrigo to appear before the City Council to discuss having the City of Revere cover the costs of the fees the credit card companies charge. The request was brought before the City Council’s Ways and Means Subcommittee on Monday night, but failed to pass muster with the subcommittee, and then failed in a vote before the full council later that night.

“The ratepayers are getting hit with a three percent fee when they pay their taxes by a credit card, when for example, the pizza shop owner, when he sells a $15 pizza, he has to pay the three percent fee,” said Fiore. “As we’ve said all along, taxes going up, apartments being built, $250 million budget, and I know the argument from some of the council has been and will probably continue to be that this is going to be passed on to the other taxpayers. Again, that is an administration decision and the oversight of the council to make the necessary cuts in order to put these things in effect.”

Fiore said the people paying with credit cards with their high interest rates are likely the people who can’t afford to pay their taxes all at once. “In the interest of the public, we stand up, we make the necessary cuts and we give the people a break,” said Fiore. “I don’t think it is right that we are charging three percent to use a credit card, and I’m certainly willing to make the cuts, and I would implore my colleagues to stand with us on it.”

Ward 6 Councillor Richard Serino said he understands that some taxpayers use credit cards because they have no other means and are living paycheck to paycheck, and he said the city should be working with those people who have trouble paying the bills. “However, for the vast majority of people, and I stand by this, who use a credit card do so because they choose to do so,” said Serino. “They do so because they would like to get the credit card points, or it’s easier than using a check or cash.”

Serino said he doesn’t believe the city should be paying the credit card companies’ fees at all. “At the end of the day, it’s a choice for most to use a credit card versus other means of payment,” said Serino. “I think that is actually fiscal irresponsibility to put the entire tax base on the hook because you are choosing to pay by credit card.”