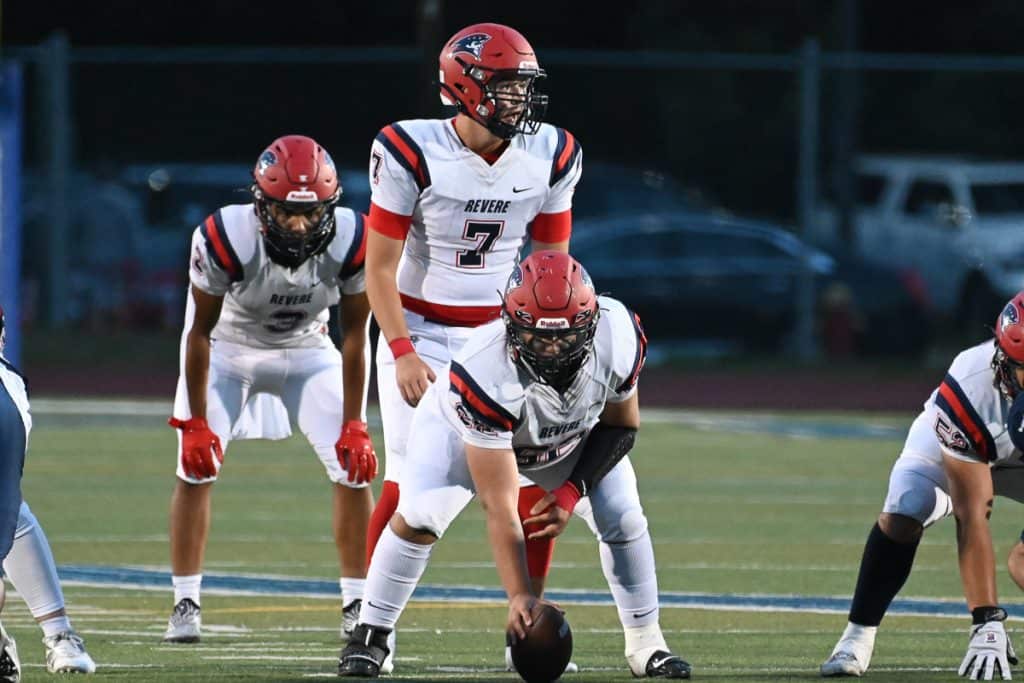 It took more than six quarters of football before the Revere High School football team scored its first points of 2022. The Patriots got off to a rough start again last Friday night in their home opener at Harry Della Russo Stadium. The visiting Plymouth South Panthers took advantage of Revere turnovers and blew out to a commanding 28-0 lead by halftime.

The promising aspect of last Friday’s affair was that the Patriots rebounded in the second half and put up three touchdowns, outscoring Plymouth by a 20-7 count. But it wasn’t enough to overtake the Panthers, who came away with a 35-20 victory.

A 52-yard punt return for a TD and an 80-yard scoring jaunt from Plymouth’s star running back Justin LaChance highlighted the first half that was dominated by the Panthers, who improved to 2-0 on the season.  Meanwhile, the Patriots, who fell to 0-2, struggled early on and would commit five turnovers in the game, four of those via interception.

The performance got better for the Patriots over the final 24 minutes.  Revere ended up accumulating 163 yards of total offense, including 131 through the air. Quarterback Carlos Rizo connected on scoring passes of 10 yards to Sami Elasri and 40 yards to Domenic Boudreau. The Patriot QB also scored himself on a one-yard plunge. Boudreau was also on the receiving end of a two-point conversion pass.

Revere head coach Lou Cicatelli told the press this week that he was looking for his squad to carry some of the momentum from last Friday’s second-half into this Thursday’s Greater Boston League (GBL) opener at home against 0-2 Medford (scheduled 6 p.m. kickoff, after press deadline).

Cicatelli reported that star player Max Doucette may not play this week due to an injury to his wrist but that veteran running back Davy Barreto, who missed the first two contests, should return to the lineup Thursday against Medford.

After this week’s game, the Patriots have another GBL clash against Lynn English at home on Sept. 30. They then take on neighboring rival and perennial powerhouse Everett on the road Oct. 7th. The Crimson Tide came out on top in last year’s meeting between the two teams.