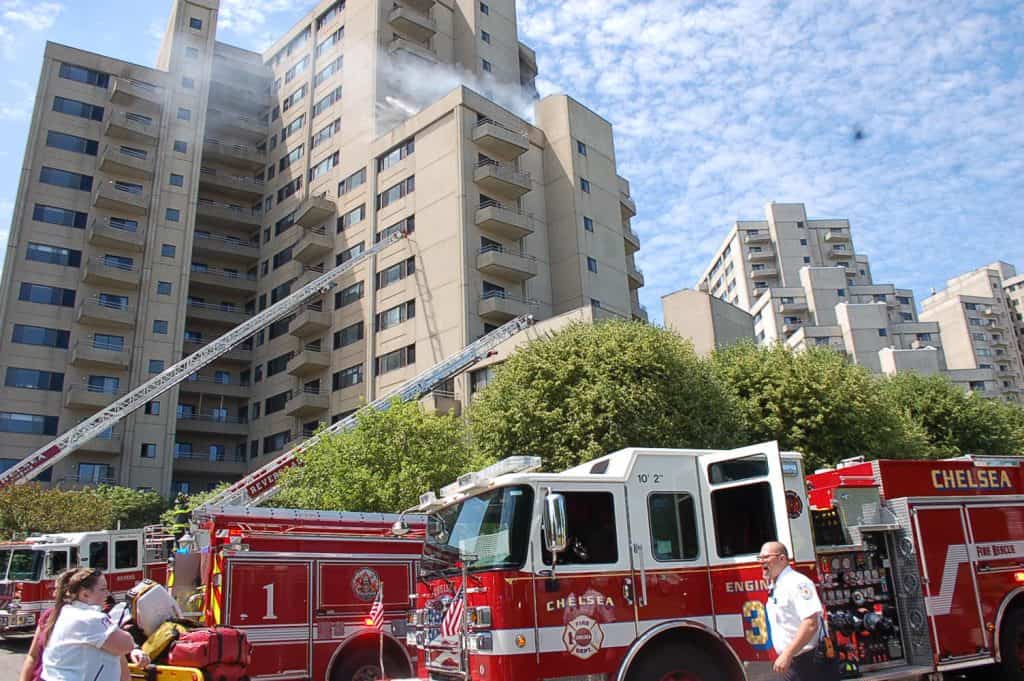 The Water’s Edge high-rise apartment building at 370 Ocean Ave. was deemed unfit for human habitation by city officials last week following a fire on an 11th floor roof deck on June 21. Around 100 residents of the building have been displaced as a result of it being condemned.

The move to condemn the building came following an inspection on July 5 when inspectors determined that numerous violations at the building had not been addressed by property manager The Carabetta Companies. The issues with Carabetta have been long standing in the city, according to Mayor Brian Arrigo. Carabetta has racked up 70 fines since 2004 and owes the city $1 million, according to the mayor.

Prior to the building being condemned, Arrigo issued a demand letter to Carabetta. “The City of Revere will not allow Carabetta to disregard their obligations to our city and their residents,” Arrigo stated. “We will continue to pursue every legal option available to hold them accountable for their inaction.”

State Senator Lydia Edwards has called for criminal charges against Carabetta, the Connecticut-based owner of the building. “I know that there are certain criminal statutes that I know the Suffolk DA … is looking into and researching,” said Edwards. “It’s a lot of things to go through and a lot of violations to look at.”

Edwards said Carabetta should be reimbursing the city and providing relief for its residents and addressing all issues at its properties before it is allowed to operate in the state again.

Carabetta also owns several high-rise apartment buildings in Malden, in addition to other properties in Massachusetts and Connecticut.

As of Wednesday morning, the Mayor’s Office had no new information to release about the situation at 370 Ocean Ave., but a press conference was scheduled for 4 p.m. (after the Advocate went to press).

Carabetta did post information about a claims number and adjuster for residents on the property, but calls and messages to Carabetta were not returned to the Advocate.

City Council President Gerry Visconti said the issues regarding The Carabetta Companies are in the hands of the administration and the City Solicitor and they will figure out what can be done legally to remedy the situation. “It is a shame that they are so unwilling to help out the residents,” said Visconti.