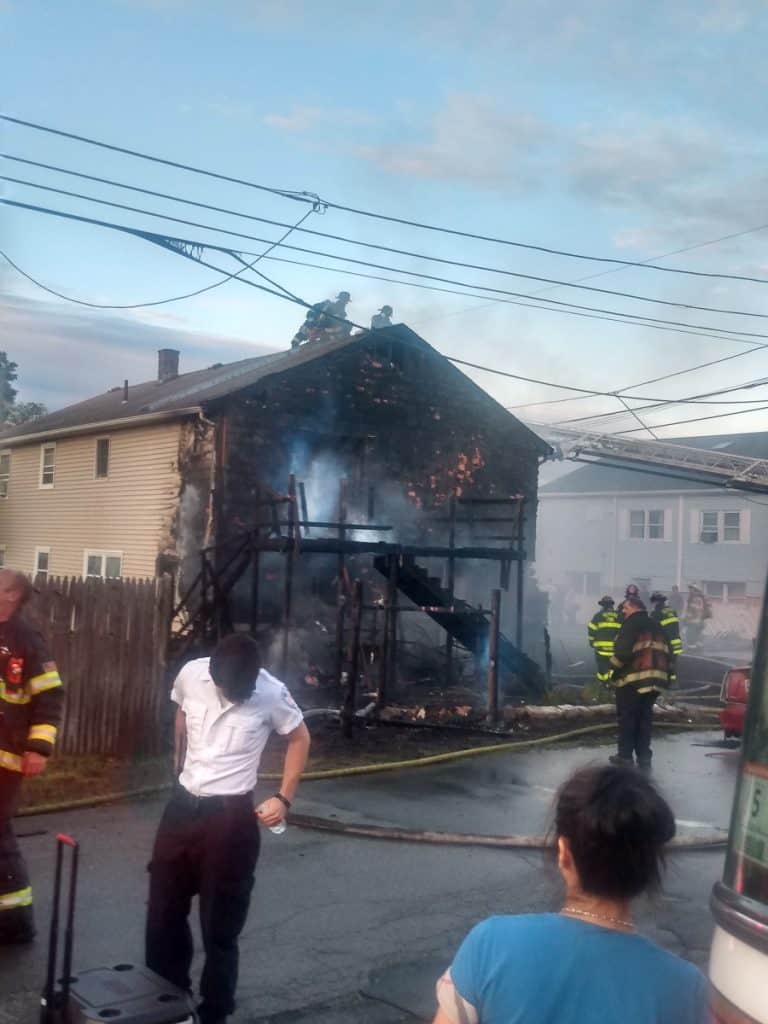 Revere firefighters battled two house fires over the past week that displaced a total of 10 residents. The first was a two-alarm fire at 60 Cecilian Ave. on Thursday evening, August 18. There were several calls reporting a structure fire just before 7 p.m., and fire companies saw heavy smoke while on the way to Cecilian Avenue.

Upon arrival, firefighters were heavily engaged with one side of the exterior of the two-and-a-half-story wood-frame house fully involved in a fire that extended to the interior house and to a motor vehicle, a motorcycle, the wooden stairs and decking and the electrical wires servicing the house, according to Revere Fire Chief Christopher Bright. A second alarm was struck by Deputy Fire Chief Anthony Giampietro, and firefighters under his command initiated a coordinated attack on the fire, knocking down the exterior fire while simultaneously attacking the fire from the interior. There were no injuries and all six residents of the house were able to safely evacuate.

The cause of the fire was likely unintentional and caused by the careless disposal of smoking materials, according to Bright, who added that the house suffered significant damage.

The second fire was shortly after 10 p.m. on Saturday, August 20, when Group 2 and Deputy Chief Giampietro responded to a reported building fire at 47 Mill St. There was heavy fire showing on one side of the building when crews arrived, and all residents of the house had safely evacuated. Crews began extinguishing the fire with a hand line, and other lines were stretched into the interior floors of the multi-unit building to search for extension of the fire and to extinguish the fire on the second floor, according to Bright.

No injuries were reported, and the cause of the fire was believed to be an unintentional, electrical malfunction. Red Cross was on the scene to assist four displaced residents.